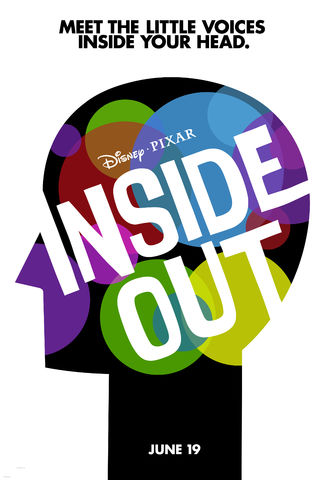 Up, also written and directed by Pete Docter, was the last original Pixar creation to arrive in cinemas but for Brave in 2012. Between and since those, they’ve only released sequels; to Toy Story, Cars, and Monsters Inc. And many more sequels are coming in the years ahead.

I can’t tell you how nice it is to see something brand new from the talented people at America’s premiere digital animation company, and I’m happy to report it’s up to the standard of their best work, including Wall-E, The Incredibles, Ratatouille, Finding Nemo, and, yes, Up.

This is an extraordinarily sophisticated dramedy for a kids movie—one that still has room for adult-level gags about Chinatown and San Francisco bears (not an animal nor a sports team)—but takes place largely in an fantasy space, the mental and emotional landscape of an 11-year-old girl. 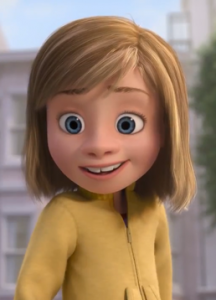 Riley (voiced by Kaitlyn Dias) is from Minnesota and she loved growing up there. She’s seriously into hockey and loves skating with her parents. But then Dad (Kyle MacLachlan) and Mom (Diane Lane) take Riley to San Francisco when Dad starts a new job, which really throws Riley off.

That’s when we get to know the voices in Riley’s head—her primary emotions: Joy (Amy Poehler), Sadness (Phyllis Smith), Fear (Bill Hader), Anger (Lewis Black), and Disgust (Mindy Kaling). They operate from a control room in Riley’s head, constantly jockeying for position. Joy is usually in charge, to the point where her busybody tactics will repress Sadness in order to get what she wants. 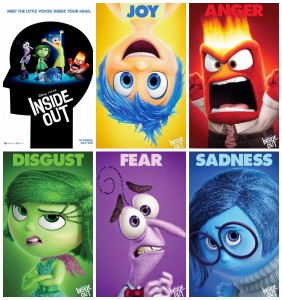 Important moments in Riley’s life become Core Memories, manifested by glowing orbs, and power the five Islands of her personality: Family, Friendship, Hockey, Honesty, and Goofball. And when she sleeps, the orbs of short term memory get sent to Long Term Memory (like a library for glowing bowling balls) in another part of her psyche, adjacent to places like Imagination Land, Abstract Thought,  Cloud Town, and The Subconscious. If you need to get from one place to another the best way to do it is via the Train of Thought. Naturally.

When Joy and Sadness get cast out of the control room, leaving Anger, Disgust, and Fear in charge, that’s when Riley really struggles to manage the big changes in her life, and Joy and Sadness spend the bulk of the story—with the help of Riley’s former Imaginary Friend, cotton candy creature Bing Bong (Richard Kind)—getting back to where they should be, with Joy learning along the way why Sadness is so important to Riley’s wellbeing.

Inside Out is a startlingly mindful film. Aside from being a typically charming Pixar creation, full of well-rounded characters, what impressed me the most is how it manages to define the difference between who we are as individuals and our emotional selves. If kids take anything away from this movie—aside from hopefully being satisfactorily entertained—it could be some understanding of the truth of their inner life. When was the last time you could say that about a Disney movie? (And don’t say Frozen.)

If I have a criticism about the film, it’s that I want more of the read world: The consequences of Riley’s emotional changes amounts to a couple of days of fear and confusion and maybe one genuine poor decision. I would have loved to have seen more social activities, time with teachers or potential new friends in her new school, as her different emotions take charge.

One of the best scenes takes place at the kitchen table where her father overreacts to Riley’s talking back, and we get a look inside his and Riley’s mother’s head, too. More of that would have been great, what different emotions can actually do to our perspective, whatever age we’re at.

But maybe that’ll happen in a sequel, which Pixar is clearly not apposed to making. (Wired has a few excellent suggestions for casting other emotions not yet featured.) And I can’t deny that the conclusion of Inside Out is pretty touching just as it is.

In the meantime, it’s an ambitious and refreshing return to form from Disney-owned creative braintrust, and I hope the next original Pixar movie, The Good Dinosaur, coming in November, continues the streak.