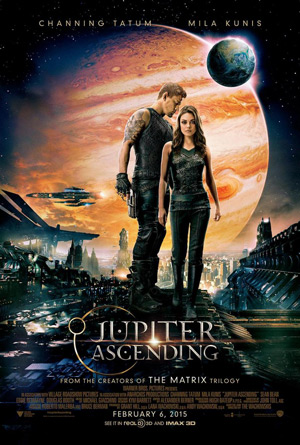 Written and directed by Lilly and Lana Wachowski

The Matrix was released 16 years ago, can you believe that? The filmmaking siblings who delivered that seismic scifi-action depth charge have had their struggles in the years since then, first with the two Matrix sequels, then with Speed Racer. I very much enjoyed their last movie, Cloud Atlas, though I recognize it polarized audiences. The Wachowski’s have never lacked ambition, one of the things about them I’ve always liked.

With Jupiter Ascending they’ve gone back to full science fiction, right in their wheelhouse. But instead of gritty, violent, and ideological, they’ve chosen to deliver a space opera. Not that there’s anything wrong with that. 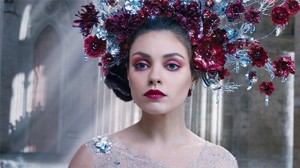 We meet Jupiter (Mila Kunis, sleepwalking through the movie), and flash back to her father murdered in unexplained circumstances before her Russian mother gives birth while (stowed away?) aboard a transatlantic freighter. In Chicago, the grown Jupiter cleans toilets for a living. In need of cash, she’s convinced by her conniving cousin to sell her eggs to a fertility clinic.

Unfortunately, this is Jupiter’s character through-line. She’s alternately being manipulated or in dire need of rescue, so accordingly she never quite escapes being slightly pathetic. And Kunis plays it all so flaccidly she doesn’t even earn our affection through her winning personality, something she’s managed in past roles. Where’s the spark?

Fortunately for her, a half-wolf-half-angel-half-man in anti-grav boots (pointy eared Channing Tatum, glowering mightily in too much eyeliner) named Caine Wise is there to save her any time she falls from a high place — which is often. Too often. 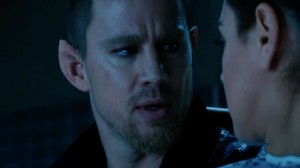 He’s working for one of three intergalactic siblings, the Abrasax (played by Tuppence Middleton, Douglas Booth, and a lispy Eddie Redmayne, hot off that  Stephen Hawking biopic), in the midst of a battle over inheritance.

Frankly, these plot details are a bit turbid, involving genetics, commerce, and immortality. Turns out Jupiter, the lost/reincarnated family member, gets Earth in the will with a populace slated to be harvested like corn for an unseemly purpose. So if the Abrasax dupe Jupe, they get access to Earth and all that corn. Caine spends the first act sweeping Jupiter off her feet as other agents try to do the same in a storm of dull CGI action sequences and bee swarms. This while Sean Bean shows up as another grumpy warrior. 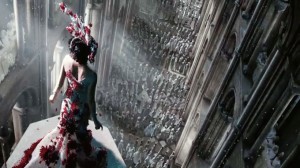 Things improve markedly when Jupiter gets off-planet and starts to understand her role in the drama. A mid-movie sequence illuminates the painful bureaucracy of this galactic civilization, the analogy of a Brazil-like world driven home by Terry Gilliam cameoing as one of those whiskered civil servants. Frankly, I’d sit through a whole movie about the android assistants with the whirring servos in their ears. They’re a delight.

For a few moments just then Jupiter Ascending has a real sense of fun, something its obvious antecedents — Star Wars, both the original trilogy and even the unfortunate prequels, The Fifth Element, and Cinderella — had a lot of. It’s what James Gunn knew to add to his Guardians of the Galaxy — material this goofy needs to be playful while it serves up growly lizard creatures and alien heroes.

I will say without fear of contradiction that the production design is grand and glowing — the baroque alien cathedrals, Flash Gordon-inspired costumes, and oil refinery industrial chic are all pretty damn impressive. (The sub-John Williams score by Michael Giacchino, much less so.) 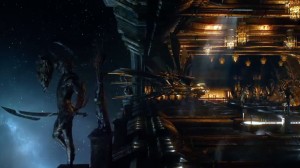 Jupiter Ascending is certainly not without entertainment value, I just wish, while my eyes were full of candy, it was a little more fun. A bit more comic relief or a roguish wit in the mix would have been welcome, not to mention a beaker of genuine sexual chemistry between the romantic leads.

And, as I mentioned before, the enterprise would have really benefited if the character its named after was given just a little more agency. For someone supposedly ascending, she does way too much descending.