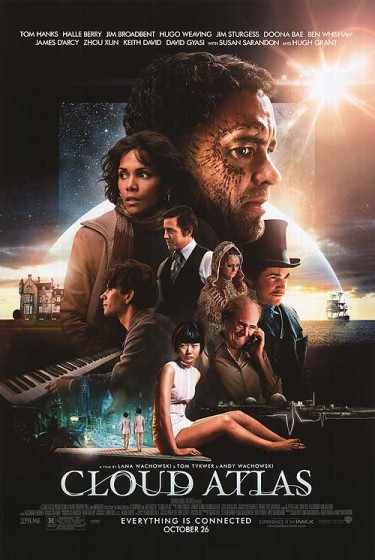 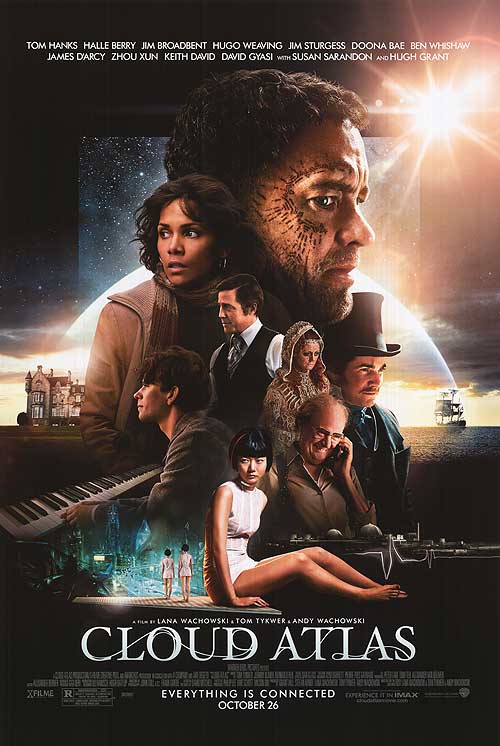 Written and directed by Lana and Lilly Wachowski and Tom Tykwer,
from the David Mitchell novel

I should confess right off the top that I haven’t read the book, so am coming to this film fairly blank slate. But I was impressed by the achievement here, which maybe I shouldn’t be given the pedigree of the filmmakers: The Matrix trilogy and Perfume: The Story of a Murderer are among their previous work. They do not take small bites. That was also evident in the less-successful films Speed Racer and The International.

What impressed me so much here is that in the not-inconsiderate running time of Cloud Atlas (172 minutes) you’ll find slick future visions and action sequences, comparable to anything I’ve seen since The Matrix (including Tron: Legacy), sitting alongside seafaring adventure, period drama, apocalyptic science fiction and a broad comedy set in a senior’s home. It’s both pulpy and sophisticated. You will see Hugh Grant, covered in warpaint, slit a man’s throat.

All this to say, the filmmakers are taking big risks with this material. To their credit, after a long set-up, the payoff is rich and satisfying, and nothing like you’ve seen.

The storytelling is anthology style, with the same small group of actors playing different, interconnected roles, including some great work from Tom Hanks (with the exception of a truly execrable accent where he’s a cockney gangster writer), Halle Berry, Jim Sturgess, Jim Broadbent, Bae Doona and Ben Whishaw, with support from Grant, Hugo Weaving, Susan Sarandon, Keith David, James D’Arcy and many others.

There are segments where you may not even recognize the performer due to the excellence of the make-up, and it is uniformly good here. I personally loathe old-person make-up, but this is as good as it gets.

It is a bit of a stunt, having performers play so many different characters. It becomes something of a game for the viewer… looking for familiar features. Maybe that’s too self-conscious for some, but I enjoyed it.

Briefly, these are the deftly intercut stories:

A San Francisco lawyer travels home from the South Pacific in 1849 while fighting tropical illness and helping an escaped slave who has stowed away on the ship.

In 1936 a young gay musician works in Edinburgh for an impatient, famous older composer while also creating his own masterpiece, the titular Cloud Atlas, all the while writing letters to his lover.

San Francisco again, this time in 1973, a journalist trying to get out of the shadow of her muckraking father is digging up dirt on a nuclear power company while the company has put a hit on her.

London 2012, a book publisher with debts and aggressive collectors lays low in a seniors’ home in which he rapidly discovers he’s a prisoner.

And then two future tales: Seoul, 2144, where a cloned worker named Sonmi-451 discovers a horrible secret, and then, the chronological final story is set sometime in the 24th Century, where a woman from a technologically advanced society visits a post-apocalyptic village on a Pacific island, looking for a guide to help her locate an abandoned mountain base.

I felt like any one of these stories could have been expanded into its own feature, though some were more compelling than others: The San Francisco lawyer on the ship didn’t grab me like the clone in future Seoul. I very much enjoyed both the composer’s tale and the comedy in the seniors home.
The pieces do take time to establish. The first hour doesn’t bring much emotional connection with any of the stories, but as the man says, it’s good to be patient.

And, yes, I see that taken as a whole, the film has things to say about love and friendship, that there are truths that connect all of us and that are irrefutable. Its stories are actively about spiritual continuity in the face of racism and sexism. And yet the movie is self-aware enough to directly reference Soylent Green in one story while another features cannibalism. Some might find that kind of internal self-referencing annoying, but I was wowed by the confidence.

And it’s not all complex layers just to build heavy messages: I noticed Hugo Weaving’s sole character trait over many time periods was black-hatted villainy, from Nurse Ratched to a ghostly demon. Some spirits never evolve through many lifetimes, is that what we should conclude? And maybe I missed this, but how was it that Sonmi-451 was universally recognized as being a revolutionary saviour?

Cloud Atlas is far from perfect, but as a hopeful and peculiar amalgam of art house and fantasy, it soars.