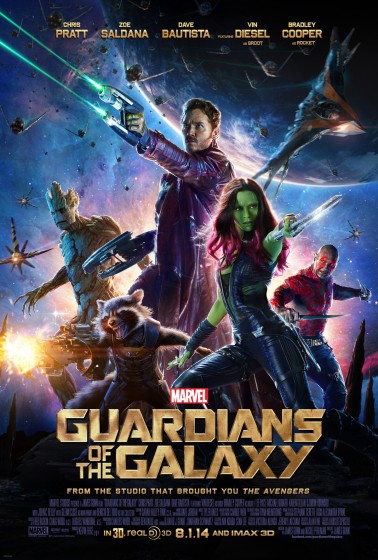 Directed by James Gunn, Written by Gunn and Nicole Perlman

Looking at the predicted huge box office tallies for this first weekend in August, The Guardians of the Galaxy doesn’t seem like the big gamble for Marvel Studios it must have been on paper. Consider that every movie they’ve done so far, with the possible exception of Iron Man, has had a pretty broad cultural cache: They started with a stable of recognizable characters beloved by nerds of all ages.

Not this time. I was raised on Marvel Comics through the 1970s and 1980s, and I barely remember these guys. I recall the blue-skinned aliens, The Kree, and Thanos (Josh Brolin), the death-loving resident of Titan, who serves as the Big Bad here, showing up in a single scene. And I remember Drax The Destroyer, the powerful, vengeful alien warrior. Except he had a cape. Star Lord? Maybe. He looked very different back then. Blue and yellow space trunks.

Of course, everything gets updated for a new generation, which is fine. And kudos to Marvel for going for it: Guardians of the Galaxy is a lot of fun, and should be whether you remember this team in interstellar misfits or not.

Star Lord is a guy named Peter Quill (Chris Pratt, likeable but not enormously charismatic), a human living in space amongst interstellar freebooters. Led by a blue-faced, snaggle-toothed Michael Rooker as Yondu, they kidnapped him when he was a boy—with no real explanation why they bothered or why, once he was grown, he never found time to return to Earth. This is just one of the many yawning plot holes, but in a movie with a talking cybernetic raccoon, I think you take a lot on faith.

That’s right: One of the guys Quill teams up with is a raccoon named Rocket (Get it, Beatles fans?), voiced by Bradley Cooper, along with a walking tree named Groot—Vin Diesel, more-or-less recreating the voice he did for The Iron Giant. I found both of these characters pretty convincing CGI creations, unlike some recent apes I could mention. Completing their band of outlaws, one of Thanos’ kids, Gamora (Zoe Saldana) and that Drax guy (wrestler Dave Bautista).

It’s a classic MacGuffin bringing them all together, an orb that contains a very powerful weapon called an Infinity Gem. Also on the hunt for this orb is a Kree named Ronan The Accuser (Lee Pace), his Number One, Korath (Djimon Hounsou), and another one of Thanos’ kids, Nebula (Karen Gillan). Benicio Del Toro makes an appearance as The Collector, as do John C. Reilly and Glenn Close, as representatives of future world Xandar. Ronan has a real beef with those Xandar folks. I’m not sure I understood why.

Making sense of all of this isn’t difficult, despite the sprawling cast and heavy exposition. That’s at least partly because the vibe is deliciously familiar and heavily indebted to Star Wars, Joss Whedon’s Firefly, and even Raiders of the Lost Ark. (It is namechecked—Quill grew up in the 1980s, making for a few hilarious moments of 80s nostalgia. Expect a resurgence in the popularity of Kevin Bacon thanks to this movie.)

The humour, which is consistent—though the script isn’t quite as funny as it thinks it is—starts with Pratt. He’s cocky, but not angry like Han Solo, nor damaged like Mal Reynolds. He’s a man-boy with a soft spot for all the cheesey AM Radio hits his mother loved, which fill the soundtrack, a cool counterintuitive idea to background a science fiction picture with such a retro sound design. That’s probably what I liked most about Guardians of the Galaxy: It gives The Fifth Element a run for its money in terms of a complete visual universe, from the tech to the costumes to the make-up, it ranges from well-considered to spectacular.

The coolest character is, without a doubt, Gamora. With this role, along with her presence in two other huge franchises—Star Trek and Avatar—Zoe Saldana has is guaranteed to star in the fevered fantasies of nerds everywhere.

The movie is definitely PG-13, throwing a few adult expressions around, which is surprising for a picture in the Marvel schema. But don’t think that it’s actually grown up in any other way—it’s still dutifully and repeatedly concerned with the real meaning of friendship and family, those G-rated movie tropes.

I have to say that action set-pieces are, well, frankly, kind of rote. I’m not sure what can be done to make those scenes of space ships flying through enclosed spaces more exciting—maybe fewer of them? All said, there’s obviously a hefty CGI budget for the ‘splosions and space battles, which will please many. And it wouldn’t be a Marvel movie without giant air- and spacecraft (along with their pilots and passengers) falling from the sky.

And, yes, True Believers should stick around for a post credit scene. If you remember Marvel comics from the 1970s, or bad movies from the 1980s, you’re going to want to see it.