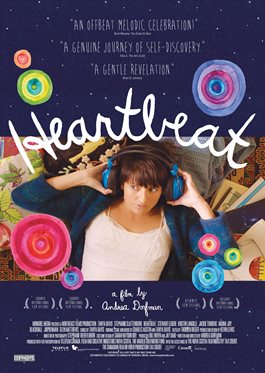 One of the most charming and delightful features I’ve seen out of Nova Scotia in years, I really adored Heartbeat. About a burgeoning songwriter (Tanya Davis) trying to locate her muse and break free of a job she hates, it’s really a love letter to North End Halifax. I also live in this town and know many of the principals on-screen, so I have to admit to a local bias. For a few more of my thoughts on the film, which I saw when it was the toast of the Atlantic Film Festival, go here. And go here to read my interview with filmmaker Andrea Dorfman in The Coast. This is so good—I urge everyone to check it out. It’s a drama about the relationship between a young drumming student and his tyrannical, overbearing teacher, but also much more. My review is up, and you can read it here. The Hunger Games: Mockingjay — Part One

My friend Karen and I are calling it “Hobbitizing“: The thing that happens when something that was small and compact and good at a certain length is adapted and expanded for the movies. Like a single book turned into two movies. They did it with the last Harry Potter, Twilight, and now Hunger Games. The Hobbit became three movies, which has to be the most egregious example of greed and vanity applied to a film adaptation. I’m not saying I hate The Hobbit movies, far from it, I just don’t see why they need to be so bloody long when the book was so concise.

So, here we have the first Hobbitized edition of Mockingjay. I just finished reading the third book and it was my favourite of the series. I’m looking forward to seeing how they adapt it for the screen. I enjoyed the first Hunger Games, the sequel even more, so my expectations for this one are fairly high.

I’ll have my official Mockingjay review posted this weekend. The Theory of Everything

Up-and-coming British thesp Eddie Redmayne is world-famous physicist Stephen Hawking in this biopic that takes a look at his early life and romance with his wife, Jane (Felicity Jones). Directed by James Marsh, who made his name with documentaries, including Man on Wire, before jumping into feature films.

I’ve made no bones about my dislike for biopics, one of my least favourite genres. But the cast here is solid, and they’re not making the mistake of following Hawking through his entire life, only a short chunk of it. My interest is moderate, but I expect I’ll go see it in the next week.