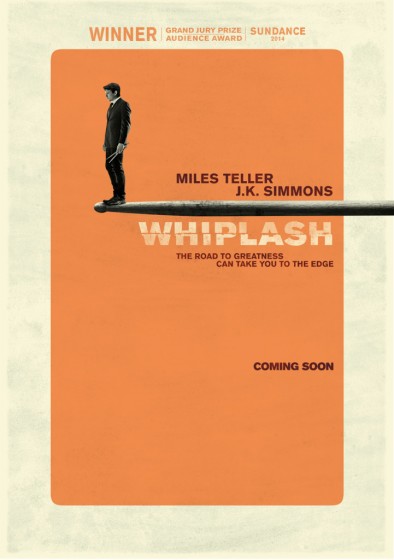 Written and directed by Damien Chazelle

Oh, what a relief.

Recently I was bemoaning the lack of stellar offerings as we rapidly approach the awards season. So many marginal, so-so movies in the cinema.

Well, I’ve got a live one right here.

This is an absolutely must-see film, announcing Chazelle as a top tier talent—and he’s not yet out of his 20s.

A neat little summation of the plot may do a disservice to what this movie is really about, but I’ll give it a shot:

Andrew (Miles Teller—solid in The Spectacular Now, a revelation here in both his acting and convincing as a drummer) is a frosh at a fancy New York conservatory of music looking to be part of the studio jazz band—the best jazz players at the school. Fletcher (JK Simmons, a huge performance, channeling R. Lee Emery circa Full Metal Jacket laced with humanity) is the band’s drill sergeant of an instructor. His job is to push the students beyond where they think they can go.

And in Andrew he finds a young man who is willing to be pushed. He wants nothing less than greatness and will beat those skins until his fingers bleed if that’s what it takes. He has one goal, to be the next Buddy Rich.

The film is constantly asking questions of the audience, in every single scene: At what cost excellence? At what cost unleavened ambition?

Having seen it a second time, it feels even more electric. I found myself relating to Andrew and understanding, in a deep way, his need to give his life meaning through his talent.

A cinepanion balked at the idea of excellence inspired by aggression. I agree, but I don’t think the world works that way. Not in locker rooms, not in corporate boardrooms, not in the schoolyard, and likely not in this highly competitive, macho musical milieu.

Paul Reiser plays Andrew’s father, Jim, who was once a writer and now teaches high school. I always hate Reiser on screen and probably always will—maybe because he was too convincing an asshole back in Aliens? If so, sorry Paul.

In one perfectly pitched scene, Jim and Andrew have dinner with family friends. It shows how the older generation are more likely to celebrate the athletic achievements of guys Andrew’s age, but not the creative ones. In about four minutes the argument is made for both sides, for enjoying life and its pleasures, what people sometimes think is important, versus brutal sacrifice. The argument for accepting mediocrity versus shooting for the absolute best.  And it also shows Andrew’s judgement and his lack of compassion. Is he his father’s son, or only what Fletcher makes him? 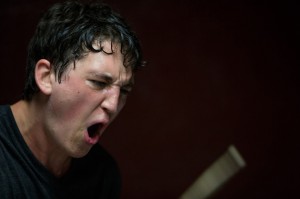 I loved where Whiplash took me. Chazelle and his DP Sharone Meir dwell on so many gorgeous details—rich browns of the stringed instruments, the sweat and blood on the cymbals. If they achieve a certain jazzy joy in the edits to the changes in the music, it never seems like anything but graceful. And in that they never forget to put their actors front and centre.

The film refuses to offer absolutes in relation to the central discussion. In Fletcher we witness a demon—a bully, manipulative and cruel. But does he have a point? Where’s our Louis Armstrong, our Duke Ellington, our Billie Holiday? At the same time, will Andrew ever be happy with anything less than the best? And what will he lose in the attempt to reach it?

The ending is a wonderful meeting of fires, the place where the battle of wills reaches a stalemate, a compromise, maybe even a breakthrough. It denies us an ovation, but is smart to do so. It’s not about that. Whiplash is about the battle, not who wins—if anyone does.