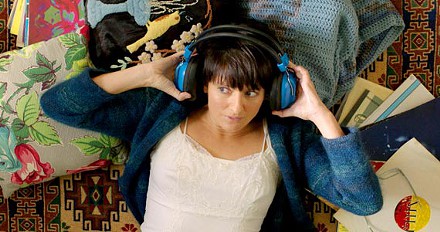 As I mentioned yesterday, the one feature I’ve seen at this year’s AFF is Andrea Dorfman’s Heartbeat. I found it to be a sweet little Halifax movie, every location and most of the cast plucked from the local creative scene—actors and musicians filling the frame around Tanya Davis.

Our city’s former poet laureate plays Justine, an office drone looking to make a life in music and finding all kinds of obstacles to that dream, most prominently her own fear of performing in front of people.

Now, full disclosure: I’m friends with Tanya, and know most of the folks who show up in front of the camera in some capacity or other. The talented group includes Kristen Langille, Stewart Legere, Jackie Torrens, and Stephanie Clattenburg. The film’s comforting familiarity makes it tough to muster much objectivity on my part. I found myself in a similar boat when I saw Hobo With A Shotgun. It’s just a thrill to see local cinema done with verve and sensitivity, with relatable, urban stories told. Not all Maritime dramas are about incest and anxiety in fishing communities. Thankfully.

Accordingly, I’m not going to review Heartbeat, but instead just say I enjoyed the film very much, and I’m sure any Haligonian who values homegrown cinema would get a kick out of it.

What I have done is interview writer-director Andrea Dorfman  for The Coast about the film’s gestation. You can go here to check that out. Heartbeat screens on Friday evening.

It’s all happening. Tonight’s the start of the 34th Atlantic Film Festival. I can hardly wait.