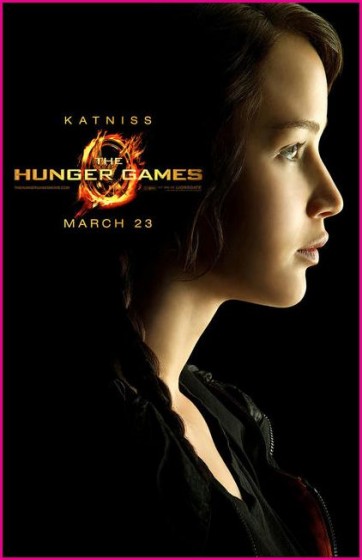 Do I need to explain the plot of this movie? As I write I’m seeing the box office totals come in, and it’s larger than even the generous predictions made three days ago: $155 million is a lot of samolians. I think anyone who’s been paying attention, and I presume that includes you, dear reader, knows the story.

But for the very few others who don’t, very briefly: Suzanne Collins’ trilogy of popular teen-lit novels feature a future dystopic North America where a militarized, fascistic government is sustained by a dozen poor, outlying districts. Almost a century ago the districts revolted, but the revolution was quashed. As a way to remind them who’s boss, the Capitol holds annual Hunger Games, a tournament where two teens from each district—between the ages of 12 and 18—are chosen in a random lottery called The Reaping. These 24, called Tributes, gather together at the Capitol and fight to the death in a televised battle until only one remains.

Katniss Everdeen (Jennifer Lawrence) is a 16-year-old girl from District 12, an area approximating the Appalachians, known for its coal mining. Katniss goes out beyond the electric fences to hunt for food, supporting her mother and younger sister, Primrose (Willow Shields), and is an excellent archer. When Prim is selected for the Games, Katniss volunteers in her place. Going along with her is a baker’s son, Peeta (Josh Hutcherson). They’re sent to the Capitol where they’re groomed for TV and trained for the Games, going up against lethal Tributes from other, more prosperous, districts.

There’s more particular detail, but that should give you a sense of what you’re in for. Does it sound like Logan’s Run and The Running Man, or Logan’s Running Man, as Kevin Smith called it? Sure does. It also sounds a whole bunch like Battle Royale, the cult Japanese film from 2000 about teenagers stuck on an island and fighting to the death. But that comparison is a little unfair: Here you are given time with the characters beforehand, so you wind up really caring about them, where Battle Royale is high-end exploitation where you can’t wait to see who gets offed.

And there’s something about The Hunger Games that feels really contemporary. It’s in the way it comments on reality TV. While watching the film, I became more and more aware of my complicity in watching and thrilling at Katniss’ survival in the arena, even when it means she’s killing other kids. The story is clever enough to put us in that position, and I think that’s how the film is actually superior to the book. It’s more political, and discretely satiric.

I also really liked how much it was a throwback to high-concept science fiction of the past. At times I was reminded of Logan’s Run, sure, but also of Westworld, Brazil and The Truman Show. The Hunger Games can count itself in this number. More people saw it this weekend than will probably ever see those other movies combined, but in The Hunger Games‘ DNA is some serious, hard—and a little campy—scifi.

What else did I like about it? Director Gary Ross, not known for his genre chops, did write Big and wrote and directed Pleasantville, so he can create specific cinematic fantasies. I really enjoyed his directorial choices here, for the most part. He went a little heavy with the hand-held camerawork for the first section in District 12 but settled down to more steady, wide shots later on. His handling of the action sequences was competent, if not amazing, but managed well the pacing and suspense, even if the third act does go on a bit long. There were times he really helped us get into Katniss’ head, especially in the sound design: I loved the atonal roar of the first few seconds in the arena, the sound moving in and out when Katniss was being interviewed by Caesar Flickerman (Stanley Tucci) prior to the start of the Games, and the whine when Katniss’ hearing is damaged by an explosion.

Technically, the film looks good. I particularly enjoyed the retro-glam in the costuming at the Capitol, and the little touches in the hair and makeup; the yellow eyeliner on Cinna (Lenny Kravitz), the crazy lashes on Effie Trinket (Elizabeth Banks) and curlicue beard on Seneca (Wes Bentley).

The cast is solid, though I thought Hutcherson and Liam Hemsworth, the boys that form two points of the requisite love triangle, were both pretty dull. Hemsworth especially makes no impact in his brief scenes. Or it could be that Jennifer Lawrence is just in another league. Revisiting Winter’s Bone before seeing this, I was startled at the similarity in the characters’ situations, but the through-line is Lawrence’s intensity. It’s no surprise that women in particular have embraced the novel The Hunger Games. The character Katniss Everdeen is self-directed, capable, smart and tough. Lawrence delivers all of that in spades.

I should mention, I read the first book before seeing the film. Ross’ film is very faithful to the text, but a lot of the pleasure for me was seeing how they deviated from it, and added to it. And beyond here lie spoilers.

Aspects of the book that are downplayed in the film include the fact that Katniss and Peeta are used to surviving on so little food; when they’re served a banquet on the train to The Capitol, they can barely restrain themselves. Once the Games begin, the detail of how the Capitol removes the bodies isn’t mentioned in the film. And the severity of Katniss’ wounds aren’t lingered upon, including her hearing loss. I presume these omissions were made to help move the narrative along, and I was OK with most of it. I particularly liked that the Muttations, killer dogs that attack the Tributes in the arena, weren’t bizarro reincarnations of the dead Tributes, like in the book. That horrific detail wasn’t necessary.

And the filmmakers chose to add new elements to the cinematic Games. With the absence of Katniss’ narrator’s voice, there are scenes that take place between Seneca, Haymitch (Woody Harrelson) and President Snow (Donald Sutherland) that never appear in the book. A riot takes place back in District 12, in reaction to what they see on TV. Also, we get to see what happens in a Truman Show-esque arena control room, where technicians adjust the cameras, the weather, even the daylight in the bosky arena. I loved that: it allows us a behind-the-scenes look at the people pulling the strings. It also helps explain why, at a key moment, The Capitol chooses to adjust the rules of the Games.

My gripes with The Hunger Games I reserve, but if I wanted to get explicit it would be about certain moments that are too obvious, or the tone not being quite hard-edged enough. But that would have quickly pushed the film into R territory, an impossible rating for this kind of blockbuster. So I won’t harp on that, complaining about what it isn’t, when what is here is solid and satisfying. As one who knows the source material, I was pleased with the movie, but I don’t think it’s a necessity to have read it in advance. The Hunger Games stands on its own.