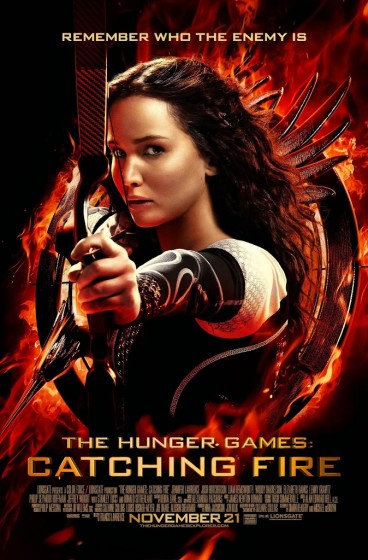 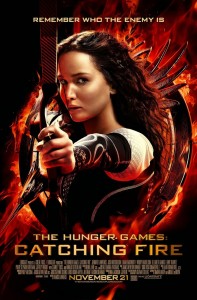 Directed by Francis Lawrence
Written by Simon Beaufoy and Michael Ardnt, from the novel by Suzanne Collins

One of those rare sequels that genuinely extends the territory claimed in the original, Catching Fire has just a touch of The Empire Strikes Back about it, which is a compliment in almost every way but one: as the middle chapter in a saga, it leaves us hanging.

Katniss Everdeen (Jennifer Lawrence) is back home. But instead of living in her hovel with her mother and little sister, she’s got a roomy, sculpture-adorned pad in Victors’ Village, which has a weird Potter’s Field quality to it. That’s because The Capitol is still in charge, and even though Katniss managed to save herself and her sweet pseudo-boyfriend Peeta (Josh Hutcherson) in the last Hunger Games, this is still life in a fascist society where the wealthy and shallow live in The Capitol and those in the 12 Districts are under their boot heels. I don’t have to explain this whole dystopic scenario again, do I? Have you been living under a rock?

OK, a bit more: The evil President Snow (Donald Sutherland) forces Katniss and Peeta to go on a Victory Tour with their soused mentor, Haymich (Woody Harrelson, who never quite convinces as a lush), which he hopes will remind the people that she’s not a symbol of resistance, but a pawn of the powerful. Doesn’t really work out that way, so Snow, along with his new gamesmaker, Plutarch Heavensbee (Philip Seymour Hoffman), provides a creative twist: the forthcoming 75th Hunger Games will be a battle of champions. Katniss and Peeta will have to return to the arena, facing off against winners from the past 25 years. How this will crush the incipient rebellion out in the sticks is a bit confusing to me. Are people more likely to be cowed by watching their heroes become martyrs?

It also occurred to me, what if one district was like the Chicago Cubs, not winning for decades. Would they be exempt from providing a champion, since they had none?

My questions remain unanswered, which is maybe fine. Instead we have a virtual replay of the trip to the big city in the first movie, the delightfully twisted talk show with Stanley Tucci’s Caesar and his blindingly white teeth, while Elizabeth Banks’ Effie, sporting astonishing hair, makeup and costumes, manages to find a thimblefull of depth. And before long we’re back to the bloodsport, with a more varied collection of combatants this time out, including Jeffrey Wright, Amanda Plummer, Jena Malone, Lynn Cohen and Sam Claflin. Once again, Peeta is laughably useless. In the book we really get his gift with baking, communication and all-around goodness, but in the movie he’s just a liability to all-business, all-survival Katniss, with her misguided determination to see him survive. (For more on his character, check this out.)

I enjoyed the visual expansion of the Hunger Games world this time, credit for which must be given to the new guy behind the camera, Francis Lawrence. He can’t, however, solve some of the more clumsy moments between characters or duff performances—Liam Hemsworth as Gale is not much more than a lumbering mansicle. But a bit more grit in all of it makes the film feel closer to the book. For a YA novel, this is pretty bloody and intense stuff, and seeing it so faithfully translated is a real pleasure. Sure, there are a few omissions—Katniss doesn’t meet the pair of District 13-seekers in the woods in the movie—and a few additions—President Snow has a charming granddaughter to keep him up to date with Katniss’ influence on the youth. But overall, the spirit of Collins’ work is more clearly channeled than in the first film.

And that ending? Well, it feels sudden, though it’s very much where the second book leaves off. We’re pretty invested by that point, and for that we can thank Jennifer Lawrence. Even when the drama is occasionally awkward and the plotting convoluted, she’s never less than authentic. Her face gives us all the emotional anchor we need to be carried away by this engaging series.