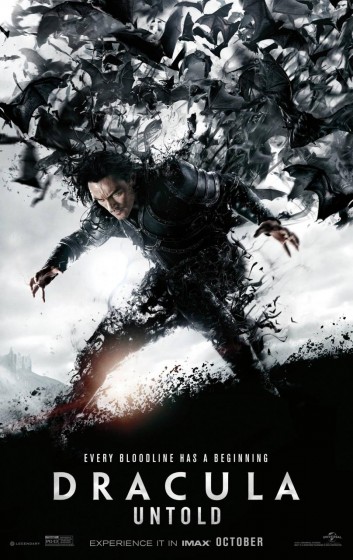 I always feel it’s important to mention the origin of characters showing up in movies. In this case, Dracula Untold is a prequel of sorts to Bram Stoker’s Dracula. I wish it came with a disclaimer: This movie is in no way related, associated, or thematically in tune with the original text, despite its use of characters from said text.

Vlad (Luke Evans) is a Prince of Romania. In years past he was abducted by the Turks and turned into a child soldier. Apparently he was a great little warrior—he wore a red and blue dragon armour and was known as The Impaler. He killed thousands of innocents. But Dracula Untold wants us to believe he took early retirement from his gig with the Turks, returning to his homeland to become a sweet and sensitive family man to his wife (Sarah Gadon) and son (Art Parkinson), and a kind and just ruler over his fellow Transylvanians.

Then Vlad’s former bestie, a Turk named Mehmed (Dominic Cooper), comes calling with conquering on his mind. Looking for a way to protect his people, Vlad heads up to a cave in the mountains to talk to Charles Dance, who hasn’t seen a lot of sun lately. Charles gives Vlad a long weekend worth of vampire powers—super-strength, animal senses, the ability to transmogrify into a CGI cloud of bats—and provided Vlad can avoid drinking human blood over those 72 hours, he won’t be a bloodsucker for eternity. Temporary powers of the undead. Handy.

He’s also sensitive to silver, though that’s not explained. Maybe Charles is half werewolf.

The thirst is powerful, but Vlad is so noble, so strong, this former killer of women and children manages to fight off the Turks single-handedly and not sip his wife, friends and countryfolk. But things do get complicated. Funnily enough, anyone else who gets turned into a vamp instantly becomes an inhuman monster. I guess none of the other people in this movie have Vlad’s strength of character.

There are so many things wrong with Dracula Untold it’s hard to know where to start. I’ll go with its art direction: The movie looks drab and grey, with unconvincing CGI effects and landscapes. It suffers from regular gaps in its internal logic. People say things that don’t make much sense. Aside from the leads, none of the characters register. The score is forgettable. The action sequences are confusing and poorly edited. It isn’t nearly as campy as it might have been, nor as coherent.

I hate to be entirely negative, but it’s a struggle to find something positive to say. It isn’t too long. Evans has charisma. His armour is fancy.

The studio head or talent who needs to be drawn and quartered here is the one who thought turning Dracula into a tragic superhero was a good idea. They even give him silver as his kryptonite. None of the elements from Bram Stoker’s novel that historically captured the imagination of readers—like sex, for instance—are in evidence here.

A good feeling I have while watching movies like this is it gives me hope for all frustrated screenwriters. If Dracula Untold can get made, anything is possible.