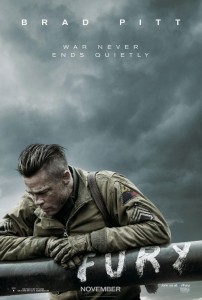 Macho filmmaker David Ayers (The Fast & The Furious, Training Day, End of Watch) writes and directs this story of a Sherman tank crew in the dying days of World War II. It’s bloody, violent and relentless—definitely in the Saving Private Ryan school of War Is Hell movies. It’s also a rousing action picture, as it moves from the perspective of a frightened newbie (Logan Lerman)—who finds himself welcomed into the crew once he learns how to kill Germans—to intense and intimate tank battles later on. It’s flawed, but I was engrossed. I’ll have a full review up here on FITI soon. 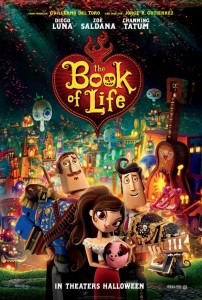 The Book of Life

I gather this was called Day of the Dead originally. It’s an animated movie for families, but it’s produced by the horror-meister Guillermo Del Toro (Pan’s Labyrinth, Hellboy), so it makes me wonder how much darkness lies in the heart of the story. It’s about a young man who is killed by someone who wants his lover for himself. Our hero has to find his way back from the realm of the dead in order to save his sweetheart from this villain. In the animation the characters all look like wooden dolls—I very much like the traditional Mexican arts and crafts look of the thing. Reviews have been mixed, unfortunately. 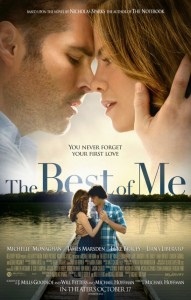 The Best of Me

Nicholas Sparks adaptations are a cottage industry these days. They’re basically review-proof—those who like them, like them a lot. I’m not one of those people. This one is about two 30-somethings (Michelle Monaghan and James Marsden) who were high school sweethearts but were separated by a tragedy. They find themselves back together in their small town and renew their romance, while we flash back to what they were like as teens. I’ve actually read up a little about the plotting here, and it sounds totally ridiculous. But then, I like cheesy 70s science fiction so whatever floats your boat.