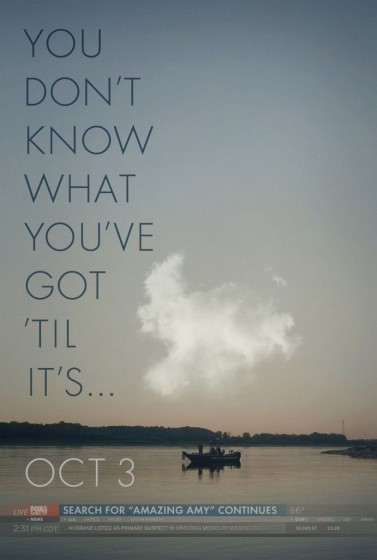 As Gone Girl cruises through its second weekend as box office champ, I’ve been enjoying all the think pieces on the film, their number a credit to its quality. As I add my two cents, I’ll link to a few of my favourites.

I’ve been reading how women are making up the bulk of the audience. I find that interesting, considering I’ve also read arguments that David Fincher’s film, from the Gillian Flynn novel, has misogynistic tendencies.

I think many of Fincher’s films have a tone of chilly cynicism and even misanthropy, but I think to consider Gone Girl as woman-hating is to miss the point. How can it be if so many women are digging it?

And from here I think it’s safe to say there will be spoilers for anyone who hasn’t yet seen the movie. 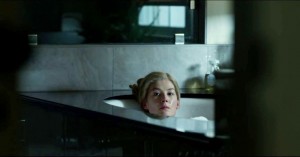 Amy may be a psychopath, cunning and calculating in ways that evoke that cultural touchstone, Fatal Attraction—a horror movie for unfaithful men—but she wins in the end. She destroys her philandering husband Nick’s reputation in front of the world and proves she’s the real “Amazing Amy” by “escaping” from her “crazy ex-boyfriend” Desi who “abducted” her. And she gets to keep Nick, on her own terms.

Is the film really about how the gendered rules of marriage make for a miserable institution for both men and women, as is argued here? I see that point, but if it’s such a sour pill, how could it still be the #1 movie after two weeks?

Maybe the character of Amy doesn’t get her due like she does in the book, but if this is really just a story about a “dopey man,” even hunky dope Ben Affleck, would he be enough to keep drawing these mostly female audiences?

Or is it that we’re just attracted to the salacious details of other people’s relationships? Or does the film have something to say about our lack of faith in our society itself? Let’s not get carried away.

I think the film does something to address truths about gender imbalances, and it does this with a knowing wink. It’s not a laugh-out-loud comedy (I don’t know that Fincher really has a sense of humour), but I still say the wild twists, as dark and bathed in blood as they are, are intended to make us smile.

And it’s an R-rated, adult tale with a number of believable female characters aside from the lead, a novelty given Hollywood’s repeated emphasis on men’s stories aimed at male audiences.

But most of all, Amy wins.

Her calculations, whether you think she’s a “psycho bitch” or not, are planned to perfection. Like Mark Zuckerberg in Fincher’s The Social Network, she’s both the hero and the villain in this story. You have to admire her. Even when things go wrong, she improvises in a brilliant way. Nick is an asshole and Desi is a stalker, and it’s easy to understand Amy’s frustration. It’s hard not to root for her to be true to herself, to be vindicated against a paternalistic society’s expectations of what The Good Wife and The Cool Girl should be. We have sympathy for this devil, and we want her to use her special set of skills. There’s no way we’re gonna root for Nick. We want Amy to win.

A final thought. It’s a little reductive, but I’ll share it anyway: I think Gone Girl might be The Equalizer for women who feel stuck in traditional gender roles.