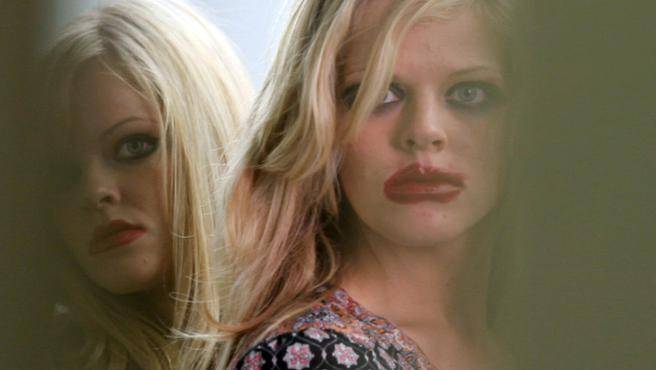 The second thing I need to admit is I’m no fan of mockumentaries or found-footage movies. I feel like both genres are played out. Last year’s Chronicle, a credible and imaginative indie superhero picture, the found-footage conceit didn’t work at all for me.

So, now we have There Are Monsters. Jay Dahl’s long-gestating horror picture had it’s premiere at the AFF Friday night. And it is found-footage, with a lot of herky-jerky hand-held camera. Already a mark against it in my book. But because I had to write about it, Dahl had shared a few key scenes with me, so I knew a little of what to expect. And when I watched those scenes, the found-footage, hand-held thing didn’t bother me at all. That may have been because I saw it on a computer screen, which may be the place a film shot this way is best viewed, where you can pause the action and really look at the footage with a procedural approach.

But in the cinema, the form of the film and its apocalyptic storyline meshed in a way that carried me along. I bought the realism of the thing, even as we moved from seeing things through the characters’ video to some universal video camera watching from nearby. There were times in the I was a bit lost—I’m not sure exactly how characters escape certain scenarios when the antagonists are clearly onto them. Still, even in that chaos, I was still engaged, still working it out. And, yes, I was pretty fucking terrified. The sound design does a lot of the work to make that happen. The shocking juxtaposition of electronic tones, heavy, ominous beats and music, and jagged editing, kept me right there. It’s a film I was listening to as much, or more than, watching.

It helps that the people on-screen are interesting and well-defined. The plot has four friends shooting video, interviewing university alums for a promotional project. As they venture out on their road trip, they start to notice things are a little weird. People are behaving strangely. People have weird smiles. Like, Soundgarden’s “Black Hole Sun” video smiles. You know the ones. As they go along, it just gets stranger and more frightening.

There’s a scene at a bank, which I think is the emotional centre-point of the film, where everything comes together in nightmarish precision. A person coughing has never sounded so bloody awful. It’s the most frightening few minutes I’ve sat through in ages, and I saw The Conjuring this summer. 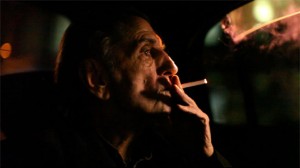 Harry Dean Stanton is the quintessential Hollywood character actor. The guy has been in a lot of great movies, for instance Cool Hand Luke, Two-Lane Blacktop, Pat Garrett and Billy The Kid, Cisco Pike, The Missouri Breaks, Alien, Escape From New York, Repo Man, Paris Texas, Pretty In Pink, Wild At Heart, Fear & Loathing in Las Vegas, The Straight Story, even The Avengers. Onscreen he often appears laconic in the extreme, and Harry Dean Stanton: Partly Fiction doesn’t do much to mess with that image. It’s pretty much 90 minutes of Stanton smoking, drinking and singing—as Jason Beaudry so succinctly put it at the top of the screening. We also get to hear a few great stories of his life and work from people like Wim Wenders, David Lynch and Kris Kristofferson. It was a genuine pleasure to spend time with him hanging at his Santa Monica Blvd. local. 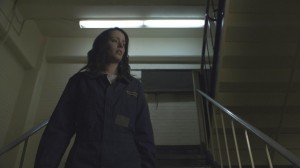 The Debert Deifenbunker is one of those places that was just begging for a movie to be made in it’s peculiar, time-locked halls. I’m so glad someone finally did. Written and directed by first-time feature filmmaker Greg Jackson, Bunker 6  (screening Saturday at 9:45pm) is set in an alternative timeline where during the Cuban Missile Crisis the bombs did fly. A small group of people retreat to a nuclear fallout shelter. When we pick up with them, they’ve been in there for 10 years. Grace (the luminous Andrea Lee Norwood), is in charge of running much of the operations, checking on the places where the radiation could get in and making sure the generator and radio are working. But the underground refuge is starting to fall apart, and she’s having terrible dreams about her dead parents. She shares the space with Mary (Shelley Thompson), Joe (Glen Matthews), Eric (Jim Fowler), and Alice (Molly Dunsworth), who everyone seems to be afraid of, though it’s not entirely clear why.

The real star of Bunker 6 is the titular shelter; Jackson and DP Christopher Ball do well to make it clinical and creepy. I just wish I’d been more engaged by the story. Though the solid premise really has more in common with a Twilight Zone episode, the tone of the picture feels like a survivor’s drama. I wanted the tension dialled up past chilly to nail-biting terror, and it never quite got there for me.