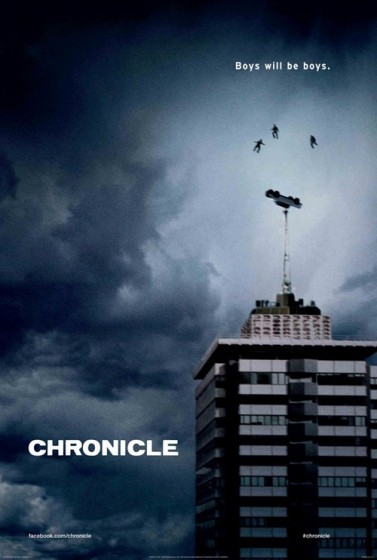 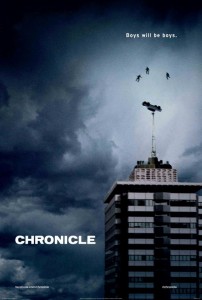 Directed by Josh Trank
Written by Trank and Max Landis

The idea of super powers: still inspiring filmmakers in 2012. It’s amazing to me that there are still fresh ways to approach ye olde “with great power comes great responsibility” story, and credit to Trank and Landis for succeeding, for the most part, in that department.

Andrew (Dane DeHaan) is a high school loner. He’s picked-on and anxious—partly because his mother (Bo Petersen) is dying and needs expensive meds, and his father (Michael Kelly) is a violent alcoholic. Andrew buys a large, clunky video camera to document his sad life and the marginally better one of his more socially outgoing cousin and only friend, Matt (Alex Russell). Matt and Andrew go to a rave (we see it all because Andrew shoots everything, natch) where they connect with Steve (Michael B. Jordan, who fans of The Wire and Parenthood will recognize). Out in the woods the three buddies find a large hole in the ground, leading them to something very strange. (Extraterrestrial tech? Who can say? The movie doesn’t.) Aside from headaches and bloody noses, all three come away from the experience with telekinetic abilities that grow stronger the more they use them.

All of this is first captured on Andrew’s camera, and later on others. Let me be the one to say it, though I’m sure I’m not the first: the found-footage genre has got to go. I know it got a big push from The Blair Witch Project and had more success with Paranormal Activity, Cloverfield and REC. I can appreciate when it’s been done well, but that’s rare. And though Chronicle makes the presence of the cameras seem plausible, for the most part, especially with Andrew’s obsessive need to document, as the film goes on it becomes distracting, then annoying, then absolutely infuriating. The final scenes, as we jump from the digital eye of security cameras, iPhones and other incidental observers, made me want to stab myself with my slushy straw. While I really enjoyed the story being told, I was equally and inversely frustrated by this conceit, diminishing my appreciation of the film by major percentage points.

Why? Because I find I’m always asking myself, why are we seeing this footage edited like this? Who did the editing? It takes me out of the story every few seconds. There’s an argument that it’s a new way of telling a story and just as valid as the omnipresent third person perspective in most movies. I disagree. It’s stupid and it needs to stop.

I wish I could say the found-footage thing is the only problem with the movie. Of the three actors, Alex Russell as Matt isn’t quite up to the range of the others, or what the script demands of him. He’s also saddled with a lame romantic subplot that goes nowhere. And Michael Kelly as Andrew’s father is just atrocious, unconvincing and not nearly scary enough. A few of the day players stink up the joint, too.

That all said, there is a lot to enjoy about Chronicle. In some ways it advances the work done by its spiritual antecedents Carrie, X-Men, Spider-Man and the TV series Heroes with a certain immediacy in the storytelling.

(“Well, isn’t that immediacy part of the found-footage concept?” I can hear someone asking. There are plenty of other ways to be immediate and fresh, I say. Less frikkin’ annoying ways. But let’s continue.)

The discovery and subsequent testing of their powers in the second act is the best part of the film. The guys do what you imagine a lot of teenagers would do if in this situation: they goof around, amuse themselves and each other and eventually use the powers to get popular in school. A scene where they figure out how to fly is a real thrill, thanks to some pretty nifty special effects.

Andrew, being the troubled one, is the first to use his power in anger. And you can see why he would. Actually, his restraint, given the pressures on him, is remarkable. When he does lash out, as well as conceive of ways to get money for his mom’s meds, there’s a vicarious thrill of seeing him demonstrate some real power over assholes who’ve got it coming. Even those who don’t.

Despite the problems, I had a good time at Chronicle. There’s enough verve in the storytelling and enthusiasm in the three leads to deliver the goods; a scrappy little superpowers movie. Pretty much essential stuff for fans of this kind of thing.