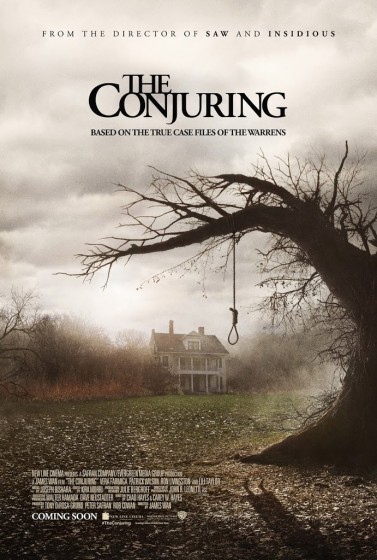 Well, wasn’t that terrifying. Excellent…? Well, not quite. But effective? Yes, right on the money.

It’s based on the purportedly true story of paranormal investigators Ed and Lorraine Warren (played by Patrick Wilson and Vera Farmiga) and the most challenging case of their career, a rural Rhode Island haunting in November 1971. The movie tells two parallel stories that collide somewhere in the second act; those of the Warrens and their daughter, and Roger and Carolyn Perron (Ron Livingston and Lili Taylor), the couple who, with their five young daughters, move into this 108-year-old home and almost immediately start to notice a number of strange things going on. The dog won’t come in, the clocks all stop at the same time in the middle of the night, odd sounds, objects moving on their own, whispered voices. And a terrible, frightening doll plays a part in all this… of course.

So, yeah, your standard haunted house movie tropes. There’s even a nod—the TV static shot—to what’s probably the most mainstream and well-known entry in the genre, Poltergeist, with which The Conjuring shares more than a passing resemblance. But major credit to director Wan, a veteran of more torture-porn fare such as the Saw movies, as well as Insidious, for the grace and efficacy in handling this material.

Almost everything works, from the mobile, sometimes swooping camera (nicely chosen hand-held for key suspense), great sound design, and perfect timing on the jump-scares so that even when you know they’re coming, they still get you where you live.

Also, the casting: Livingston and Wilson are typically solid as the menfolk, but it’s Taylor—known for her kookier roles but playing against type as the straight-ahead mom—and especially Vera Farmiga, who are at the heart of this movie. I don’t think it’s possible for Farmiga to give an inauthentic performance, and here she elevates everyone by her presence, and lifts material that might have seemed silly or frivolous with her conviction. For me one of the best scenes is a lovely moment between her and Taylor where she reveals a gift of intuition. For people like me who don’t take in a lot of horror, Farmiga is reason enough to see the movie.

Where The Conjuring doesn’t quite become a classic of its genre, just a very good example of it, is simply in its inability to supersede those tropes it delivers on so well. As it certainly and satisfyingly provides characters to care about and will make your hair stand on end, it doesn’t quite do anything we haven’t seen before. Maybe it’s been awhile since we’ve seen it done so well, but this isn’t new.

And one nitpicky point: while much of the lighting in the film is effectively moody, I didn’t think the interiors quite convinced. It was always more of a haunted set than a haunted house.

Anyway. What really matters: Sure as hell I was terrified.