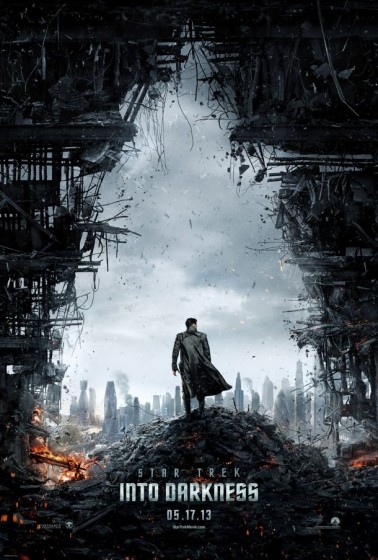 It’s been reported that JJ Abrams didn’t grow up having been a big fan of Star Trek. I’ve had trouble finding the direct quote online, but the impression I got from having read an interview with him was that he found Classic Trek too staid and dull. He’s apparently more of a Star Wars fan (boding well for his direction of the new film in that franchise).

But Star Trek isn’t Star Wars. And the best way I can describe what Abrams has done with Star Trek Into Darkness is he’s attempted to turn Star Trek into a Star Wars movie. And not even the good ones in that franchise. This is more like George Lucas’ reviled prequels. Compared to the originals, the prequels were largely disappointing  and, at times, borderline laughable. Just like Star Trek Into Darkness.

Abrams Star Trek reboot in 2009 had a very clever script, but I was in the minority who didn’t love it. The admiration was for his time-and-space travel twist, how he was able to preserve the canonical Trek while still launching his new, rebooted version, to boldly go where multiple Starfleet crews on multiple TV shows had gone before. But it clearly wasn’t my Trek. It was much heavier on the action, the scifi effects and the adventure, much lighter on the philosophical, technological bent that made Trek so popular for so many years. I consider Abrams a talented creator of fan fiction.

With his new effort, at its best there’s still kinetic outer-space entertainment to be found, but it is not at its best very frequently. More often it’s a jokey, insincere replay of notes and beats from a far better film—Star Trek II: The Wrath of Khan—with an ensemble of performers who don’t get enough time to live, breathe, or make their mark.

Plot-wise, it’s different enough to not feel like a remake of Khan, but there are many elements that will seems familiar to fans of that movie and the TV episode that preceded it, “The Space Seed”. Former Federation officer John Harrison (Benedict Cumberbatch) has some deep-seated beef against the Federation and is willing to murder its officers to get satisfaction. Hot-headed James T. Kirk (Chris Pine), has fouled up his chances of being the captain of a starship by ignoring the Prime Directive, the non-engagement policy when earthlings encounter alien life. (And you get the impression Abrams himself is thumbing his nose at these antiquated rules of the Star Trek universe as much as Kirk is.) Kirk is also in conflict with his first officer, Spock (Zachary Quinto), whose life he saved. But when Harrison attacks a Starfleet operation in London and then in San Francisco, Kirk is brought in through his mentor Christopher Pike (Bruce Greenwood) and Admiral Marcus (Peter Weller).

None of this sounds much like Wrath of Khan at all, does it? Well, the familiarities will start to be apparent as you go along.

Despite having done well to reestablish all the beloved crew of the starship Enterprise in his first time at the helm, Abrams plots this version within an inch of its cinematic life, leaving character notes to be yelled over the hum of starship engines and behind his chronic and incredibly distracting passion for lens flares. Just as we start to understand that Uhura (Zoe Saldana) is upset with Spock because of his lack of emotion when facing death, the conflict is resolved with a simple, brief conversation. Let’s not get into the fact this whole relationship, something that never existed in the original Trek, makes no sense given Spock’s seeming inability to provide any kind of human warmth. But thanks for that neat, unconvincing subplot resolution.

Crew-member Scotty (Simon Pegg) gets to do a bit more this time out, while Sulu (John Cho) and Chekov (Anton Yelchin) do less. The doctor, Bones McCoy (Karl Urban), gets to deliver a chucklesome line of dialogue that wouldn’t have seemed strange coming out of DeForrest Kelly’s mouth, but the key relationship of the classic series, between Bones, Spock and Kirk, is reduced to a slender bromance between Kirk and Spock, one that doesn’t even hold up when, in a third act development, their lives are threatened. And the addition of Alice Eve has scientist Dr Carol Marcus is pretty much pointless, with the most unjustified lady-in-her-underwear scene I’ve seen in ages. Here’s a talented actor who went to Oxford, and the writers of Star Trek Into Darkness couldn’t find something for her to say or to do besides take off her clothes? It’s the film’s lamest moment.

Harrison’s motivation is maybe the most interesting part of the film, as in the second act his need for revenge begins to look especially justifiable. But I found Cumberbatch, while bringing a nice physicality to the role, to be just a hair too campy and not scary with his Alan Rickman-esque vowel pronunciation. Consider what kind of threat Benicio Del Toro—who was in talks for the role—would have brought to this character, not to mention he’s not quite so lily-white European, given who he’s supposed to be.

(OK, at this point, does anyone not know who Cumberbatch is really playing? Just have a look on the IMDB page, for chrissakes.)

Harrison’s surrender and incarceration in the middle of the movie provided another example of a recent blockbuster cliche started with The Dark Knight, followed by The Avengers and Skyfall, of the super-capable villain allowing himself to be captured to further his own ends. Unlike those examples, Star Trek Into Darkness neglects to really provide much for Cumberbatch to do in these quiet, imprisoned moments, and any discussion of how he gained his impressive superhuman abilities is glossed over with confusing exposition. Instead, Abrams focusses on what I call “countdown suspense”, where characters have to do something to defuse a bomb or save a crashing ship as a clock ticks down their final seconds. This element is definitely part of Star Trek lore, but I wish I cared more here. Combined with not one, but two starship ocean dunks, and the barely remarked-upon deaths of what must have been tens of thousands of city-dwelling innocents, I was wholly unmoved. In fact, I was just pissed off as we went along.

I know there’ll be some who think I’m being too tough on what was, at times, a passably slick slice of scifi action pie. And if it hadn’t had anything to do with Star Trek, I might have cut it more slack. But I’ve ceased to find anything admirable in Abrams’ vision for the franchise, when he seems to have so little interest in what the source material was about. When he doesn’t even respect the things people liked about it. When even in the small stuff—Spock doing ridiculous acrobatics like something out of The Fifth Element and engaging in a brawling fistfight—is badly handled. When, in his attempts to rejig a 31-year-old movie, Abrams fails to justify the effort or create much new and original that will stay in your memory.

When—and this is the most egregious offense—he doesn’t give you a single character you wind up caring about. When you’ve cared for these characters for a lifetime.