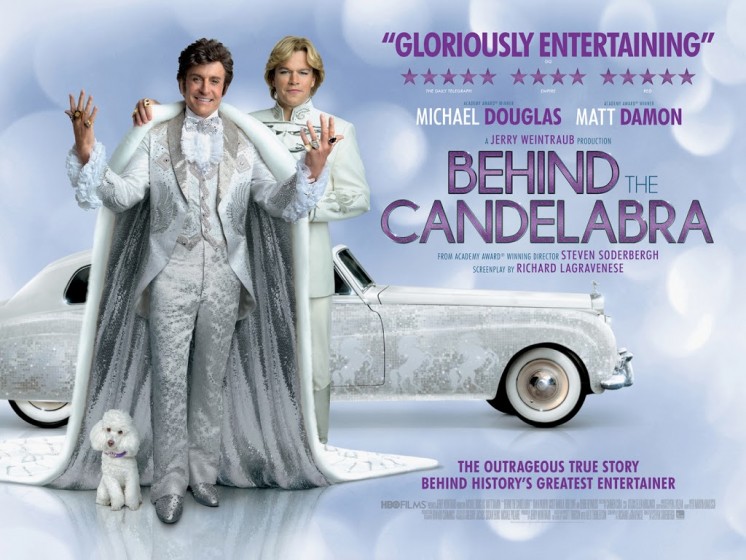 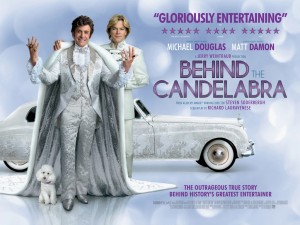 Directed by Steven Soderbergh
Written by Richard LaGravenese, based on the book by Alex Thorleifson and Scott Thorson

This feels like such an unlikely film, a biopic of the legendary entertainer Liberace. He was an extraordinarily private person for someone in the public eye, spending his entire life closeted. I think we can have a lot of sympathy for him these days since he was probably right, had he come out in his prime his career would have been finished. Looking back at his performances, it’s hard to believe everyone didn’t know. Maybe people did but preferred not to acknowledge it, just as he didn’t.

What makes Behind the Candelabra feel even more unlikely is that even in our day and age, there aren’t many Hollywood movies with same-sex relationships at their centres. It’s been reported that Soderbergh tried to get this made through a studio and couldn’t do it. Even though he’s an Oscar winner and there were big stars attached.

And yet, if this film had opened in November in cinemas, Michael Douglas would have earned an Academy Award nod for Best Actor. No doubt in my mind. Maybe Matt Damon, too. (Interestingly, I gather it’s opening in cinemas in the UK in June.)

I agree with John Doyle who wrote in The Globe and Mail  about the film and how HBO has become a home for the kind of storytelling that Hollywood rarely takes risks on. He makes a good point.

Soderbergh’s an odd director for this material. Typically, he doesn’t pander. He steps back, underplays any dramatic visual style, and lets the script and performers take the day. (I am going to miss him if he chooses to never direct again.)

There must have been a temptation to make Liberace and his lifestyle seem fabulous. (Imagine what Baz Luhrmann would have done with this material.) That’s not to say we don’t get an eyeful of Liberace’s famed opulent tastes, but it isn’t celebrated, endorsed or judged. It’s just presented. The audience gets to decide what to make of it all.

Liberace, or Lee to his friends, was an adored pianist with a regular stand in Las Vegas. Douglas plays him with flourish and charisma that hides a lonely, sometimes paranoid man. He could be loving and generous, but he was incredibly vain, too. Damon is his much younger companion, Thorson, who is swept into Liberace’s life and becomes his assistant, both off-stage and on, and live-in boyfriend. You get the sense that Thorson knew what he was getting in to, that he was expendable, but was beguiled not only by the extravagant lifestyle, but by Lee’s essentially sweet and fragile nature. He wanted to take care of him. What Thorson didn’t count on was having his personal freedoms so curtailed, or the impact of a drug habit on his life. 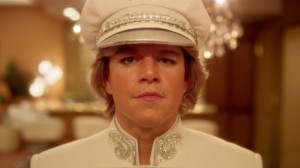 While there are a few laughs, especially early on, the story is tragic. Even if you don’t know the history, you can feel this isn’t going to go well from the beginning. Lee’s life is insulated and artificial. He has a controlling manager—Dan Aykroyd in a juicy supporting part—and a terrifying plastic surgeon, who on Lee’s instruction changes Thorson’s face, too. The surgeon is played by Rob Lowe, and he is really good in his brief role. I’m not sure if I’ve ever said that about the former Brat Packer, and I’m not sure how they got this face to do what it does. If the actors here deserve awards, the make-up artists on Behind The Candelabra do too.

I’ll reiterate, it’s not a happy story, but it’s a fascinating one. And Douglas, who I understand recently overcame cancer, seems reinvigorated. This is a career performance.