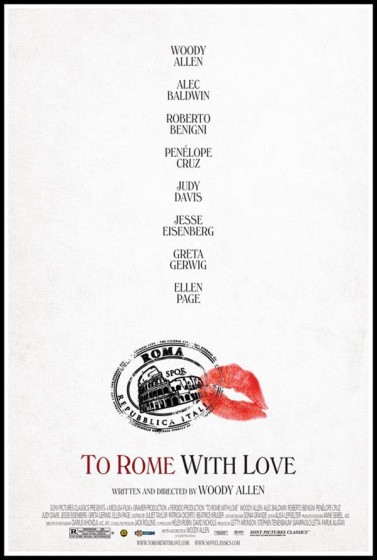 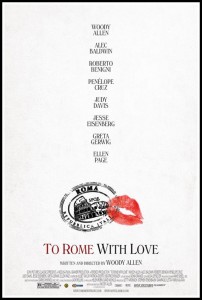 It used to be that I’d think, well, Woody Allen gets unfairly bad reviews because everyone is always comparing him to his own work. And how can you hold him to his best, his Annie Halls, Manhattans and Purple Rose of Cairos? I do it too, but I almost always give him a passing grade, considering his pace and productivity, a film a year for 30 years, and because even in his bad movies there’s always something to enjoy, some wit, turn of phrase.

But with this lackadaisical farce, Allen suffers not only in comparison with his solid work but with modern comedies in general. As bad as mainstream comedies often are, as coarse and vulgar, To Rome With Love could use just a bit of a contemporary touch. It feels stale, where the talent involved hardly registers.

This is an ensemble, but one where the various storylines never intersect. American tourist Hayley (Alison Pill) falls in love with a young lefty Roman (Flavio Parenti), and when her parents (Judy Davis and Allen) visit Rome to meet him and his family (Fabio Armiliato and Monica Nappo), Allen discovers his future son-in-law’s father has a great, operatic voice, but only when singing in the shower. Meanwhile, Jack (Jesse Eisenberg) and Sally (Greta Gerwig) are American students who welcome Sally’s good friend Monica (Ellen Page), an actor, to stay with them. Monica is irresistible to men, apparently, and Jack is intrigued, despite himself. He strikes up a friendship with a vacationing architect, John (Alec Baldwin), who becomes a kind of chorus to all their scenes. John starts with his own thread as a character but becomes an omniscient adviser to Jack, full of critical commentary. We also meet Antonio (Alessandro Tiberi) and Milly (Alessandra Mastronardi), a young Italian couple who are moving to Rome from the country so he can take a job with his wealthy uncle. She goes to get her hair done for the big meeting, but gets lost in the streets, stumbling upon a film set populated by her favourite Italian movie stars. He gets an unexpected visit from a prostitute (Penelope Cruz) who fills in for his wife in more ways than one. And an office worker with a family (Roberto Benigni) suddenly finds himself famous, hounded by the paps and beautiful women, for absolutely no reason.

So, what did I like about it? (This will be a pretty short list, so it’ll go first.) Ellen Page shows us something else she can do: sultry without being coy. She’s an ideal Woody Allen character. And I liked that the movie had sexy moments, though it could have pushed that further. And the concept of Ozymandias Melancholia, I was curious about that. Also, Rome looks great, of course.

But I mentioned that stale, unfunny script, with its ridiculous music cues and half-formed scenes. It’s as if Woody grabbed four stories from his drawer of movie ideas and threw them together without developing any one of them overmuch. Benigni’s section was a rough idea that never went anywhere and never produced a laugh. I know paparazzi were invented in Italy, but then maybe the section needs to have something to say about fame for fame’s sake, beyond the terribly pedantic “fame is better”. The young Italian couple is slightly more interesting, but Cruz is simply wasted in her role, just there to look good in a red dress. And while it’s always great to have a taste of the wonderful Judy Davis, Woody I think could leave himself out of his movies from here on; he’s lost a step or two in his comedic timing as a performer. The best story is the one with Gerwig/Eisenberg/Page, and I felt like it could have been expanded. But please explain the device of Baldwin’s character a little better, and give Gerwig, who’s just exploding now, much more to do! Another waste, surprising given Allen’s history of creating great female roles. The end of that bit also doesn’t really resolve satisfyingly.

So, as a longtime Allen fan, how does To Rome With Love score? Well, it may not be quite among the D-list of recent Allen, with Curse of the Jade Scorpion and Whatever Works. But it’s close. It has none of the nostalgic sweetness of Midnight in Paris, the genuine heat and laughs of Vicky Christina Barcelona, nor the smarts of Melinda and Melinda. It might be somewhere in the range of Scoop.

See, there I go, comparing him with his other work. Not an entire loss, but let’s hope he’ll get it together for the next one, coming in summer 2013.