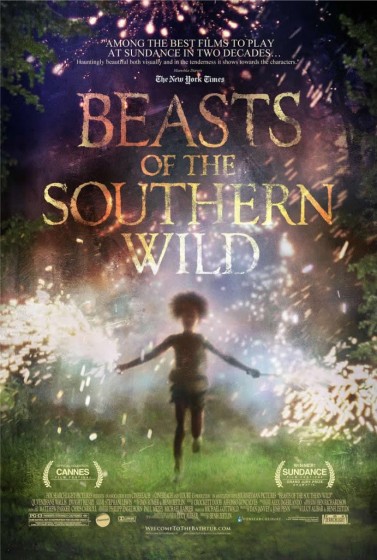 Beasts of the Southern Wild arrives at the local art house cinema anointed by glowing reviews from folks like the Times’ AO Scott and awards from Sundance and Cannes. There’s no doubt in my mind it heralds the arrival of a distinctive talent, a filmmaker with a voice, which is always an exciting thing to witness. But I didn’t love it, because the things that make it raw and new also make it ragged and semi-formed.

It’s a modern day fairy tale, indebted to Huck Finn as much as Where The Wild Things Are—the book and the film. Told from the perspective of a little girl named Hushpuppy (Quvenzhané Wallis, a revelation), we are in the deep south of Louisiana, beyond the levees that keep the water off the factories and cities and regular folk. This is the community of Bathtub, which we learn is full of unique people, misfits uninterested in being part of society. It’s a magical place, of a sort, though most of adults appear emotionally unbalanced, violent and alcoholic, and the town, such as it is, looks like a giant garbage dump. Hushpuppy narrates, talking about the time of cave people, when huge beasts called aurochs—that look like giant, tusked hogs—were frozen in glaciers. But the environment is changing, the icecaps are melting and the aurochs will soon be free, marching south. That means Bathtub will be flooded, and Hushpuppy and her father Wink (Dwight Henry) and all their pigs and chickens and dogs will be in big trouble, because Wink has no intention on leaving, even though he’s clearly unwell. Hushpuppy’s mother is a beautiful woman who left long ago, though she might be at a lighthouse on the horizon, waiting for her daughter.

The combination of fairy tale, apocalyptic fable, eco-drama and American epic is quite a wonder. I don’t think I’ve ever seen anything quite like it, and I was fascinated by what Zeitlin and his collaborators were going to throw at their audience next. It’s a story crammed full of whimsy, but that still has time for dynamite, philosophical, chicken-nugget-eating sea captains, and enormous meals of raw crab and crayfish. Shooting in swamps couldn’t have been easy, so there’s also the logistical achievement here that impresses, as do the auroch effects.

But it still very much feels like a first film. Though Wallis is astounding as Hushpuppy, as her father Henry is pretty much a one-note character, full of rage and bluster but not much else. I didn’t think he was up to the tender moments, and the rest of the cast also exhibited a lot of non-actor tendencies. Hushpuppy winds up being the only real character for whom you care, which is a problem, I think. The meandering story, which diverts here and there like an offshoot of the Mississippi looking for the ocean, takes a couple too many detours for my taste. I wasn’t sure the sideplot of the mother was necessary. And I just found myself admiring, rather than living in the film.

That said, the talent on display is obvious, and I’ll look forward to the next work from this filmmaker. And Wallis, well, if she wants to be a star, she’s got that sewn up.