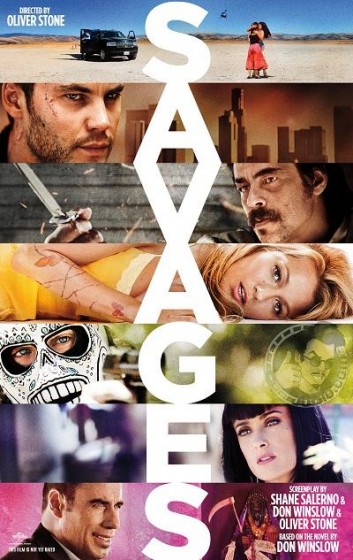 Chon (Taylor Kitsch) and Ben (Aaron Johnson) are two very successful California pot growers and dealers. They run a clean and efficient operation that makes them very comfortable, providing chances for humanitarian missions, too (so we know these are dealers with a conscience). Besides a lucrative business with opportunities for growth, they share something else: The affections of O (Blake Lively), a California girl if there ever was one. She narrates this thing, saying from the get-go that this is the kind of story where the person telling the tale may not be alive at its end. The Sunset Blvd-esque set-up gives it a noir lilt, but really, Oliver Stone’s Savages is more a sunny, exploitation drama that starts strong but sputters towards the end.

Chon and Ben’s work attracts the attention of a Mexican drug cartel, run by Elena (the always magnetic Salma Hayek) and operated by Lado (Benicio Del Toro, sleazy as hell) and his henchmen. They make the Cali boys an offer they can’t refuse. When they try, the Mexicans kidnap O and offer to send her back in bits and pieces if they don’t start sharing the wealth. Meanwhile, corrupt FBI guy Dennis (John Travolta, who never convinces as morally ambiguous) is playing both sides off each other.

What should then have been a bloody, extended action/revenge picture turns onto a meandering and piecemeal drama where the bloodletting comes only briefly between longueurs. We learn about Elena’s relationship with her daughter, about Lado’s job dissatisfaction, about Ben’s anxiety around the violence in his work. None of which is as much fun as a high-adrenaline, systematic hunt of the bad men, which never fully materializes. And any opportunity to better explore the hot dynamics of the seemingly healthy threesome is negated by the lady being separate from the guys for most of the movie. Only Elena offers a genuine slice of wisdom on that situation with a single, well-delivered line to O: “They must love each other more than you, otherwise how could they share you?”

And finally, the picture wants to have its cake and sit on it, too, with a double-barreled ending that stinks more of audience testing than spent shotgun shells. And is, I gather, quite a variation from the source material.

I will say there are some fun moments on this Oliver Stone ride, in the style of his older material like U-Turn and even a little of the old chainsaw mayhem that reminds me of his Scarface script. He never fails to inject some visual pizzazz, a bit of sex, and many of the actors are very pretty (Benicio, no offense, excepted), I just wished it all paid off a little more satisfyingly.

And you have to feel for Kitsch, who hitched his movie career to three middling-to-bombs right out of the gate (Savages, Battleship and John Carter). Hard to imagine it will continue in similar leading-man style, though I’ve heard he’s shooting a Canadian indie in Newfoundland right now called The Grand Seduction, a remake of the Quebec hit Seducing Doctor Lewis. Maybe a light comedy will be luckier for him.