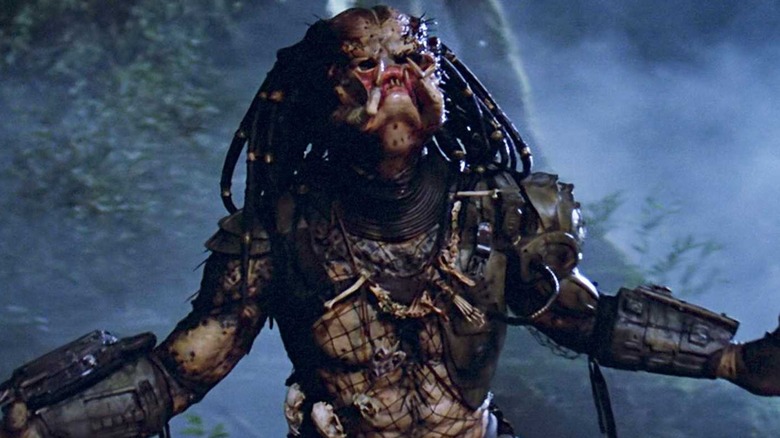 As a science-fiction series birthed out of slam-bang, macho Hollywood of the 1980s, this one falls behind The Terminator and Alien by some distance.

Maybe that’s because those pictures have at least two stone cold classics each, while this one, despite a number of attempts to capture the magic of the first, still rides on the rep of the John McTiernan original from 1987. 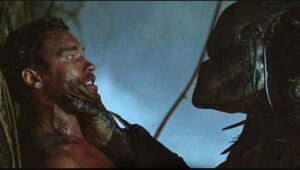 I’m here to see whether the series produced any diamonds in the rough before the well-hyped new addition to the franchise, Prey, arrives on Disney+ this week. (Check back for a review of that in the coming days.)

All the earlier films are available to watch on Disney+ now, the spoils of the Mouse House’s 20th Century Fox takeover.

(For the record, I won’t be reviewing the two Alien vs Predator crossovers. I watched them a few years back out of sheer curiosity and found them both almost a complete waste of time.) 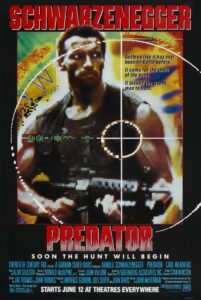 The things that haven’t aged well in this film I’ll get out of the way right off: The wildly toxic machismo of the almost entirely male cast, the oiled-up arms and blatant cock-measuring. The massive armaments now read as wild overcompensation for other shortcomings. It’s that or many of the characters are painfully closeted — Blain, played by former wrestler and future politico, Jesse Ventura, is the most cartoonishly homophobic and ridiculous. Also pretty dodgy is the near mysticism ascribed to Billy, the Native American character (who, at least, is being played by a part-Cherokee actor Sonny Landham). 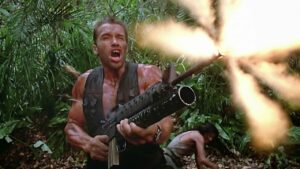 But what works remarkably well still is the mash-up of genres in this jungle-set sci-fi-actioner. For almost all of the first 45 minutes this is a straight-ahead mercenary picture with geo-political overtones. 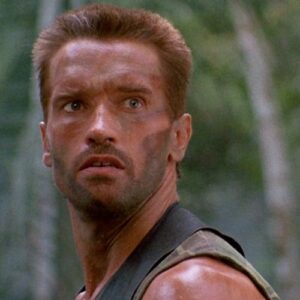 Dutch (Schwarzenegger) and his extraction team, including Billy, Blain, Mac (the icy cool Bill Duke whose character enjoys a dry shave), and a couple other more forgettable guys (like, I’m sorry, but Shane Black), are sent to an unnamed Central American country to rescue an American VIP who went down in a helicopter. They’re led by CIA man, Dillon (Carl Weathers), who has his own motivations for this off-the-books trip. 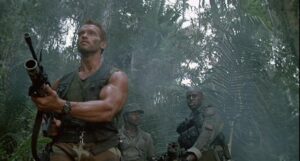 The Predator (Kevin Peter Hall in a fabulous Stan Winston-designed creature costume) keeps his distance while the soldiers do their job, then starts to pick them off. The most dangerous game is a day in the park for this guy, what with his advanced tech and shimmering digital camouflage — an effect that still holds up 35 years later. 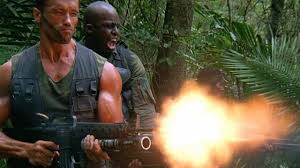 Schwarzenegger is a particular pleasure here in his prime. Was there ever an actor with so many limitations who excelled so convincingly despite them? His unearthly confidence in front of the camera is most effective when he sells the drama and suspense of the scenario. The one-liners — like “Stick around!” after he’s knifed a guy to a wall — are a sop to his brand at the time but work a lot less well now. 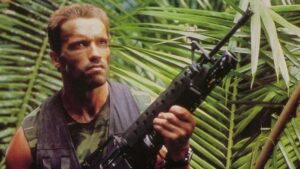 Alan Silvestri’s symphonic score is epic, an orchestra moving in unison with every explosion, but what’s especially clear here is that McTiernan is a master of this particular kind of action. It’s in how he and his DP, Donald McAlpine, shoot the action of characters through the green.  It’s also the wonderfully chosen setting, which for once in this kind of movie genuinely feels like a jungle.

As Nigel Floyd wrote in Time Out London Magazine when Die Hard came out, it’s like McTiernan was born with a camera in one hand and a rocket launcher in the other. 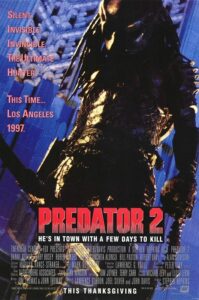 This one starts with a bang: Set seven years in the future, we’re in the middle of a drug war in Los Angeles.

This picture was made in the tail end of the 1980s and Hollywood’s firearm fetish is in full flight. It points the finger at Columbian and Jamaican gangs, but the picture Predator 2 is painting is one of full urban war, with the cops a thin blue line between the outlaws (all immigrants, naturally) and the good people, and the cops’ hands are being tied by federal task forces — the government is always to blame. 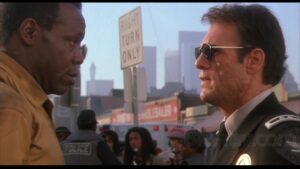 In the midst of this street war comes Danny Glover, like he just stepped off the set of Lethal Weapon 2 (which he probably did). He’s another LA cop, Mike Harrigan, just complaining less about being too old for this shit. Maybe it’s his collection of big guns in his trunk keeping him young. 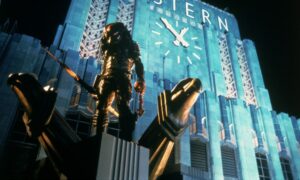 His team includes Rubén Blades as Danny Boy and Maria Conchita Alonso as Leona. The federal asshole with the slick hair an a suit that looks two sizes too big is Peter Keys, played by Gary Busey, and a loudmouth new transfer to the district is Jerry Lambert, played by the always welcome Bill Paxton. These actors are all a whole lot better than this material. 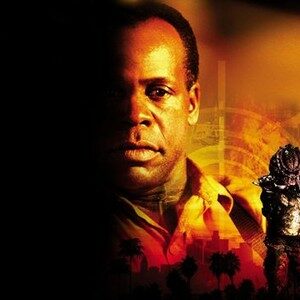 The Predator (Hall once again), just another murderous illegal alien, is right in the middle of all this killing anyone he thinks makes a worthy target. This time he’s got a few new toys but the same old tactics — taking bodies (and body parts) like trophies.

This is a sci-fi monster movie spliced with urban cop action via serial killer movie, but not really satisfying on any front. Occasionally you feel like Hopkins and his collaborators want to make a Paul Verhoeven movie while also stealing from Jim Cameron and John Carpenter. The end result is a sour, trashy picture.

About halfway through I started to wonder if this was all supposed to be satiric — a scene where a gang accosts a commuter on the subway and the victim pulls a gun, and then so does everyone else in the car, including an elderly woman, you start to think maybe this is supposed to be funny. Cynically so, but maybe still funny. 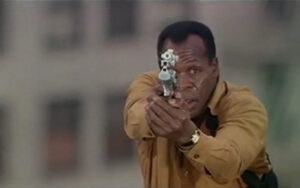 Paxton goes big in every scene he’s in, which is a good time, but when Busey shows up in a suit of aluminum foil the rest of this gets just plain awful.  We get to see the Predator’s trophy room and it includes a Scott/Cameron alien skull, an easter egg before such things were de rigueur. They were setting up that terrible crossover a ways back. 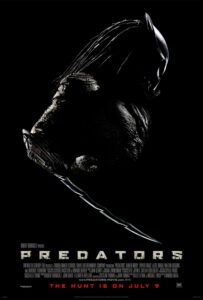 When I saw the Troublemaker Studios logo (along with ye olde 20th Century Fox fanfare) I thought Robert Rodriguez was directing, but he’s only producing this picture, which otherwise doesn’t start promisingly. The concept feels like a first draft of a First Person Shooter video game. 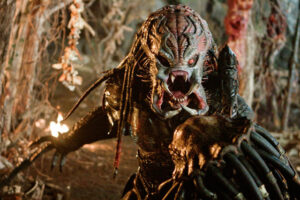 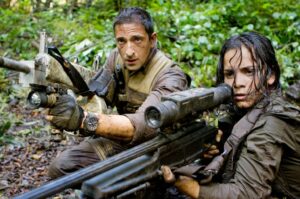 They discover that the jungle is a game preserve, and they’re the prey. Yup, they’re being hunted by our friend, the Predator. Excuse me, Predators, as we get some variation in the monsters this time out. For a sci-fi b-movie premise this isn’t the worst, even though it doesn’t bring much to the franchise we haven’t seen elsewhere. It doesn’t do a lot to update what was established in the original film. A heavily armed group fight an enemy they can barely see or comprehend. 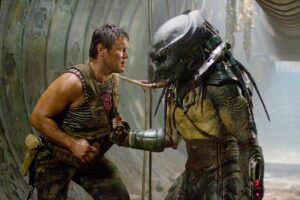 It starts to get interesting when various characters recognize that deadly predator behaviour mirrors the horrors they’ve inflicted on their fellow human beings. The suggestion that the predators  mimic the worst, most violent tendencies of the human race while exploiting our sentimentality as weakness is a worthwhile plot thread. While the movie points toward those kind of ethical possibilities, the third act delivers one too many implausible plot twists to take any of it very seriously. 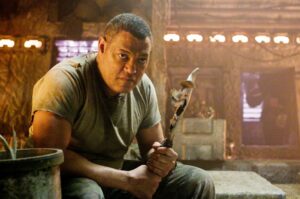 At the end of the day, it’s mostly it’s just running and shooting. Brody, typically a more sensitive, Wes Andersonian leading man, is an odd choice for the alpha male here, and he never quite overcomes the  terrible eye make-up he has to act through. Braga’s the real hero, anyway, and provides the ensemble’s heart.

Predators may be diverting enough for a completist, but is far from essential. 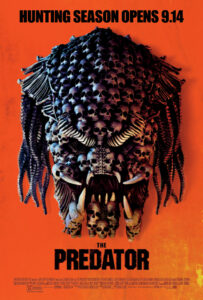 Is it weird each one of these movies has almost exactly the same running time? Anyway, given Black’s heritage with this material — having acted in the original film — it makes sense he might have a personal investment in delivering a decent monster movie at a time when we’re seeing plenty of legasequels. His presence also gives the marketing department an extra hook. I still can’t believe they haven’t been able to lure Schwarzenegger back for one of these.

It turns out that of the three sequels to the solid original, this is probably the one that most embraces the material’s b-movie soul. The writer of Lethal Weapon, The Nice Guys, and Iron Man 3 should be able to do a Predator movie in his sleep. Fortunately, he’s wide awake with this one. 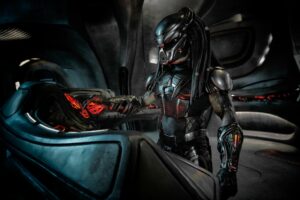 Instead of waiting for 45 minutes to show us the beastie as in the previous movies, here we get one right away. It’s on the run from another ship and crash lands on earth, right in the middle of a military mission led by Army Ranger Quinn McKenna (Boyd Holbrook). McKenna grabs some of the predator gear and smuggles it back to the States. Meanwhile, his son, Rory (Jacob Tremblay) — who it’s heavily suggested may be autistic — is back home in suburbia with his mom, Emily (Yvonne Strahovski), and discovers said gear in a box. 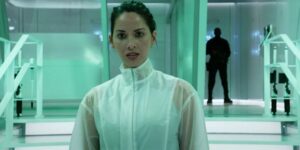 Meanwhile, Dr Casey Brackett (Olivia Munn) has been brought in to examine the actual predator, which American authorities (in the form of Sterling K Brown) have detained. Not for long, folks. Soon McKenna is on the run with a group of badass soldiers who were all headed to the brig — played by Keegan-Michael Key, Trevante Rhodes, Thomas Jane, Alfie Allen, and Augusto Aguilera — and trying to save his son from that rogue predator, who’s also still being tracked by another, bigger beastie. 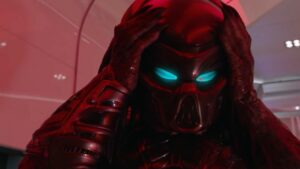 I honestly don’t know why this picture got such a rough ride from reviewers aside from its occasional tastelessness. If masculine juvenalia and a lack of taste was all it took to sink this franchise, it would’ve died years ago. 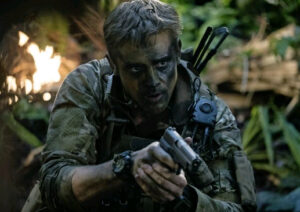 Black repeatedly pays homage to the films in the franchise that went before — whether they deserve it or not — including some on-the-nose dialogue more familiar out of the Austrian Oak’s mouth, and a little clever casting: Jake Busey plays the son of the character his father, Gary, played in Predator 2.

By the third act, The Predator has outstayed its welcome, and while it’s frequently unintentionally silly, it’s the first film since the original to include a streak of genuine humour. Black knows what works for this material, and it’s that intangible, mysterious magic, also known as fun. It’s loud and ridiculous, but fun.