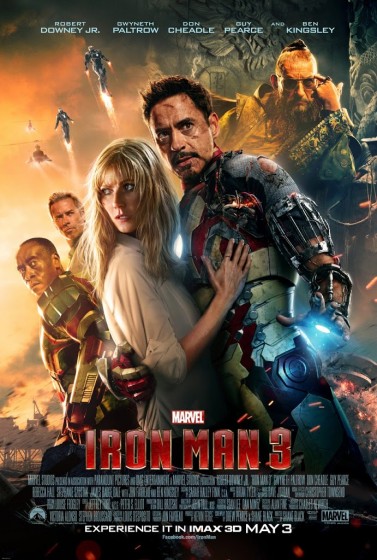 Here’s the beginning of the next phase of Marvel’s world cinema domination. It’s working pretty well for them so far.

Robert Downey Jr is back in the shell head, and that’s the good news. This guy is the best special effect the Iron Man franchise will ever have. His ongoing status as King of Hollywood is a real joy to witness—especially given the actor’s rocky road back to prominence after years of drug abuse, arrests and tabloid playtime. With Tony Stark, RDJ has found a perfect role to channel what it’s easy to assume is  an inherent restless intellect, razor wit, hubris and compulsive behaviour. It’s a good thing this guy is so charming or he’d be insufferable.

When we meet Stark again—his rampant narcissism is intact—his compulsions are actually getting the better of him. He’s still enjoying the high life on the shores of Malibu with his (now live-in) girlfriend Pepper Potts (Gwyneth Paltrow), working insane hours on his many projects, but that’s because he can’t sleep. The events depicted in last summer’s The Avengers have instilled some serious anxiety in our Knight in Scuffed Armour.

There’s an added shroud of darkness in this material. It’s in the Stark voiceover that begins and ends this thing (“We create our own demons”) and the very vivid iconography of a Bin Laden-esque, media-savvy terrorist and his street-level bombs in American cities. Not that it isn’t also campy and ridiculous, but it’s a tightrope the filmmakers are walking here: don’t scare the kids too much with the grim edge, but bring in enough of the world to keep it (feeling) real.

That terrorist is called The Mandarin, played with a theatrical flourish by Ben Kingsley. Also present is a biotech wizard, Aldrich Killan (Guy Pearce), looking for funding for his strange Extremis tech. It can regrow limbs, give super-strength and massive heat-conducting abilities. It can also turn people into bombs.

Former Stark bodyguard Happy (Jon Favreau, who did double-duty as director in the first two instalments) and Stark’s military buddy Rhodes (Don Cheadle) are both still in the mix, with the latter now piloting the War Machine armour, rebranded as Iron Patriot. Add to this group Rebecca Hall as botanist Maya Hansen—who Tony once had a fling with—and a kid (Ty Simpkins) who provides some invaluable aid in the second act, and you’ve got quite the crowd of characters to manage.

Shane Black, writer of Lethal Weapon and The Last Boy Scout and writer-director of Kiss Kiss Bang Bang, does keep all the balls, and many of the characters, in the air all at once.

In fact, his direction of this propulsive plot is both a positive and a negative. It’s breathless. And while it has more than its share of truck-sized holes, it’s driven so quickly, fuelled by the dialogue’s consistent and multiple zingers, you won’t really have time to dwell on those problems. This is probably for the best, the way the film’s humour is always at the fore. You can forgive a lot when you’re laughing all the time.

However, due to the locomotion, by the end you’re left without a great sense of what you just sat through. What is it that the villains really want to do? How exactly does Extremis turn people into super-strong, flaming zombies? And how is it that anyone who wears Tony’s armour seems to be able to make it work for them except the president (the great William Sadler) and a particular bad guy late in the running?

And the bad news is, as usual, the overuse of CGI. It’s used to have Stark and others do things that seem so outrageous they push any and all credibility out the window (along with grand pianos).

Now I know, I know—this is a comic book movie. But it isn’t a cartoon and it requires some kind of internal logic. Witness the scene from the trailer where Tony’s house falls off the cliff and into the ocean. None of that convinced me for a second. Tony’s iron gauntlet flying (swimming) off to give him a hand while he was trapped underwater? Clever? Maybe. But blatant animation failing to authentically mimic reality? Entirely.

And regular readers can rest assured my general dislike of the gimmick that is 3D hasn’t changed.

Though, overall, Iron Man 3 is a step up from the second instalment (that wasted Mickey Rourke as the villain). A week from now I may not remember any part of it, but I’ll remember I did have fun while I was there.

And to bring it back to Downey Jr, he’s mostly responsible for the good in the movie. Black and Pearce know RDJ is their MVP, and put him front and centre—and out of the armour—for big chunks of the running time. My favourite bit was in the second act where Stark finds himself in rural Tennessee, his suit’s AI, Jarvis (voiced by Paul Bettany), offline, having to rely on the help of Simpkins’ Harley. There’s a moment when you feel like it could veer into sticky sentiment but Downey Jr deftly takes a page from Bad Santa (this movie happens at Christmas because Shane Black likes Christmas) and saves us all from that unpleasant fate.

Not that I need to encourage comic fans to line up for this, there are a few nice nods to the source material, including an appearance by the silver and red Iron Man armour popular in the late 80s. As usual, a funny post-credit sequence is worth sticking around to see.