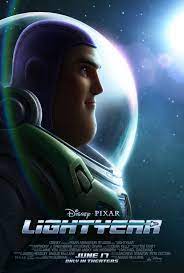 You may have heard about the confusing original marketing of this film: Is this the Buzz Lightyear that was also the toy (voiced by Tim Allen) in Pixar’s first feature, 1995’s Toy Story, and the three sequels that followed? Turns out a kind of disclaimer starts the movie, explaining that Buzz Lightyear was young Andy’s new toy, and this was the film he watched to inspire him to get it.

Well, right off this explanation prompts more questions than answers. If Andy loved the film, surely there were other characters from it represented as toys, and he’d have had those, too.  I’m speaking as someone who was 7 when Star Wars came out, and 10 for The Empire Strikes Back — there’s no way I would’ve just been satisfied with just a Luke Skywalker action figure.

And Buzz’s antagonist in those original films, the evil Emperor Zurg, who got a larger role in the second Toy Story movie, his disposition in Lightyear at no point suggests he’s a sovereign ruler of an empire.

And let’s not even get into the fact that Lightyear doesn’t resemble in the least a film from the 1990s. This is less a throwback than a new, and not especially imaginative, way to continue a franchise into the future with three, count ’em, credit cookies to help with that. The calculations makes one’s head spin. 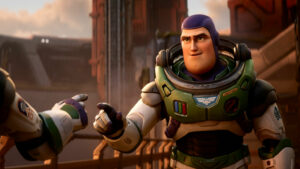 But putting aside the pretzel logic and flawed continuity, the real question is this:

Does it stand on its own apart from the Toy Story movies?

The answer is yes — you certainly don’t need to have seen those other films to appreciate it — but also no: Lightyear delivers the professionalism and style we’ve grown accustomed to from even mid-tier Pixar, but it only just reaches that tier. Any and all of the Toy Story pictures are better than this.

That’s at least partly because Buzz (now voiced by Chris Evans) is a bit of a pill. 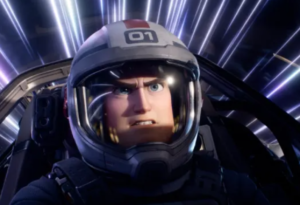 We meet him when the turnip-shaped ship he’s on drops out of hyperspace and he’s woken from stasis. He goes to investigate a planet that may be inhabited by intelligent life. As he’s exploring it — with fellow space ranger, Alisha Hawthorne (voiced by Uzo Aduba) — the aggressive life forms (tentacle vines and enormous flying bugs) attack, and Buzz, who’s convinced he can save the day all on his own, makes a mistake that strands the ship and all its (now awake) passengers on the planet.

The first half of the film involves Buzz trying to atone for his mistake by flying a series of missions to test a new mix of fuel, synthesized using this planet’s resources, that hopefully will allow the crew to reengage their ship’s hyperdrive and go home.

But every time he goes on the mission, due to the relativity of time and space he returns four years later though it’s only been four minutes for him. He goes on a bunch of these missions while the humans colonizing this planet settle down and get older a lot faster than he does. 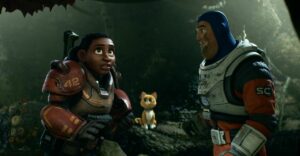 This is rich material for both a solid, thoughtful science fiction film as well as a slam-bang space adventure. Borrowing heavily (but respectfully) from films like Alien, Interstellar, and any number of iterations of the Star Trek franchise, there’s a lot here to enjoy in how this is structured, and the visuals are really impressive — from the alien landscape to all the gear, the spaceships, and, of course, the Space Ranger super suits.

But, like I said, Buzz is terminally unappealing. He’s both painfully overconfident and clearly insecure, but not in the charmingly deluded way his toy counterpart was in the earlier version of the franchise, who has to face a number of deep existential crises.

Nothing so fundamental happens to this Buzz. When Commander Burnside (the instantly recognizable voice of Isiah Whitlock Jr) of Star Command  decides to bench him when his missions fail, Buzz gets comfortable breaking the rules and absconding with his robot cat (Peter Sohn) and the one fuel mix that might actually work to reach hyperspace.

What’s the message here? Buzz is both committed to the Space Ranger rules and happy to break them when they don’t suit his commitment to the all-important mission. The Star Command bureaucracy is to be ignored if Buzz’s personal agenda doesn’t line up with the organization’s decisions, I guess. He doesn’t even think twice about it.

The second half of the film concerns the threat of the alien Zurg (James Brolin) and his army of robots. In order to fight them Buzz is forced to team up with Hawthorne’s granddaughter, Izzy (Keke Palmer), who’s aged up to adulthood while Buzz was on his test flights, along with ex-con Darby Steel (Dale Soules) and the terminally clumsy Mo Morrison (Taika Waititi, maybe getting a little overexposed these days).

There’s some fun to be had in their fights with the robots, but the true disposition of Zurg doesn’t really work. I won’t spoil it, but by that point I was largely checked out of Lightyear. 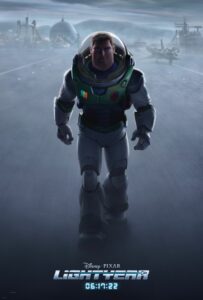 I did appreciate that one of the picture’s key themes is to foster understanding that we all make mistakes and we need to be able to forgive ourselves in order to move forward. (The other, far less interesting theme is that we need to be able to trust each other to succeed — that one feels especially stale.) I also appreciate the film brings to the forefront a healthy and happy gay relationship — which has stirred some ridiculous controversy over a kiss.

There are certainly things to enjoy here, I just wish it hung together better than it does. And I wish I felt half the affection for the flesh and blood Buzz as I did for the plastic one.