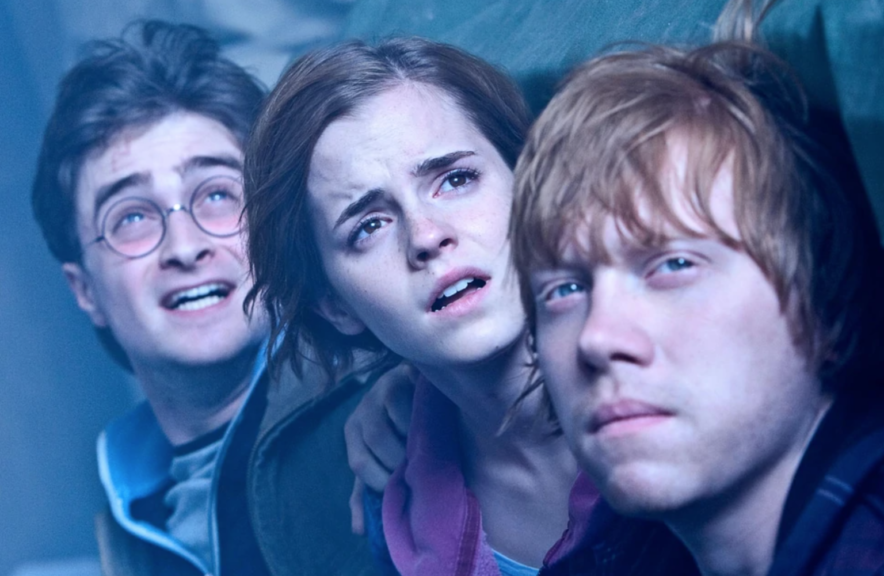 Having written thousands of reviews over the (actually more than) 10 years of this blog, I figured it might be fun to go into the vault and bring dusty, perhaps forgotten reviews back into the light. Expect these to show up around once a week for the next little while. I may lightly edit these dispatches but I’ll also do my damnedest to preserve my original takes. I hope you enjoy them. ~C 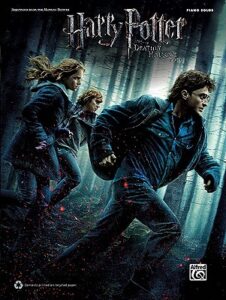 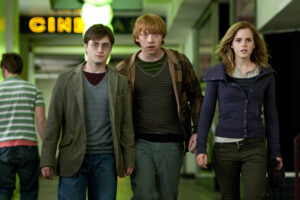 It’s certainly possible that because I haven’t read the rest of the books in the series I’m at a disadvantage for appreciating the movies, but then doesn’t that reveal a distinct flaw in the cinematic adaptations? Shouldn’t they be building a world standing on its own and distinct from the books?  Either way, I was just pleased to find I enjoyed Harry Potter and the Deathly Hallows: Part I as much as I did. 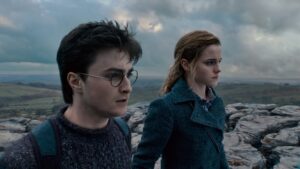 Yes, plenty of incidental characters show up like we’re supposed to care about their subplots then vanish for great swaths of the running time. Yes, there are plot puzzles to be figured out and magical talismans to be collected and destroyed, all of which felt like heavy-handed macguffin-ism to this audience member. 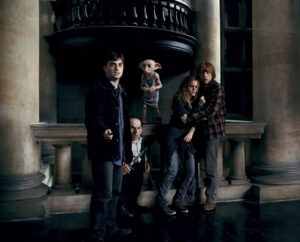 But now, with Harry (Daniel Radcliffe) and his chums Hermoine (Emma Watson) and Ron (Rupert Grint) free from the cloistered halls of the magical school, Hogwarts, big bad Voldemort (Ralph Fiennes) in charge and striking fear into the hearts of even his allies, there’s something here that I haven’t really felt in the recent movies: a genuine sense of jeopardy. 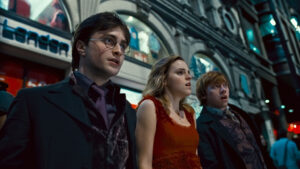 In the opening act, a number of Harry’s friends are ambushed, characters die, and Harry, Hermione and Ron make a run for it. Spectacular set-pieces include a fight in a coffee shop, the infiltration of the Ministry of Magic and a gorgeous animated sequence illustrating a fable. And though it sags a bit in the middle as our worried trio try and stay a step ahead of the baddies in a variety of remote locales, the tension remains.

One of the joys of this series has been the stellar turns by the cream of British thespian stock. Unfortunately, Alan Rickman’s scene-snatcher Severus Snape only has a few moments to scowl in this edition, but we do get to see a bit more of Bill Nighy, Rhys Ifans, Helena Bonham Carter and Imelda Staunton. The final fate of one of the supporting characters towards the end I suspect is supposed to be very moving, but I found the particular fellow to be one of the more annoying of the supporting cast so there were no tears shed from where I was sitting. 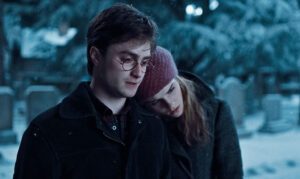 But overall, its a darker and more exciting adventure, certainly reinvigorating the globally beloved series, setting us up for the final instalment. 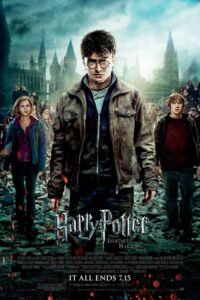 In this final film, that cute noseless antagonist has his hands on the Elder Wand, the most powerful magic stick in the universe. Meanwhile, our heroes are looking to find and destroy a variety of magical talismans called the horcruxes as they hold elements of Voldemort’s soul and are key to his defeat — with those destroyed, theoretically, he’ll be easier to kill. 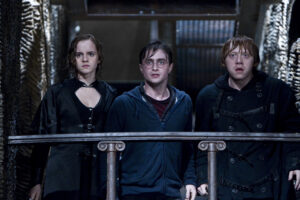 The hunt for the horcruxes (horcrii?) brings Harry, Ron and Hermione to stage a dramatic break-in of the cavernous vault at Gringots, the magical bank, leading to a moment that interestingly evokes the end of Indiana Jones and the Last Crusade. The nods to blockbuster franchises don’t stop there, with a very lightsaber-like duel late in the running and a great line of dialogue lifted directly from a sequel starring Sigourney Weaver and  enormous xenomorphs.

But these touches are nothing but affectionate. The fact of it is, the filmmakers are treating the material with the utmost respect, delivering a final battle with a dramatic intensity coupled with eye-gouging CGI spectacle that really impresses, all taking place at Hogwarts, which gets a hell of a beating. 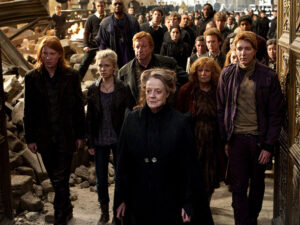 These are dark, scary times. There is no sense that Harry will make it through, and in fact, it seems that what he’s doing is preparing for death in his battle with Voldermort. The final fate and motivation of another character plays a key role as all mysteries are finally explained.

And in a 20-minute period we get appearances from almost every supporting character to ever appear in these movies — a sterling cross section on British thesps — all bringing all their gravitas. That includes the ghostly characters; Kelly MacDonald makes her mark on the series as a spirit who points Harry to one of the final horcruxes. And at the core, it’s great work from Maggie Smith, Alan Rickman and especially, with layers of latex doing nothing to diminish the complex emotional landscape in the villain of the piece, Ralph Fiennes, who does some of his best work with Voldemort. 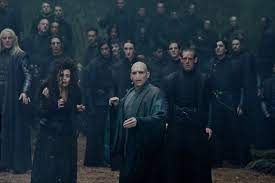 And if there are maybe one or two too many emotional climaxes in a battle that takes up most of the movie, the moments are earned in a story that so satisfyingly concludes a decade worth of lead-up.

That’s not to say if you have no experience with Mr Potter you can just dive in here and expect to make sense of it all. But for true-believers, this is the motherload. If you’ve come this far it’s hard to imagine this will disappoint. 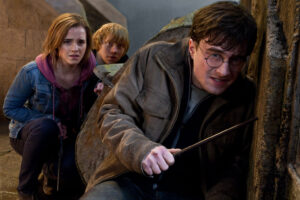 2022 Note: Having recently virtually revisited these films through the HBO/Crave reunion special on New Years Day, one thing that really strikes me with the benefit of hindsight — especially since the lead actors have gone on to healthy careers away from this franchise — is how we watched them grow up on film, and how profound that was. Boyhood earned Richard Linklater and his cast a ton of plaudits for what they were able to do using time as a storytelling technique, and deservedly so, but this series of movies did the very same thing. It allows us to see a talented group of kids grow up, hone their skills, and shine.