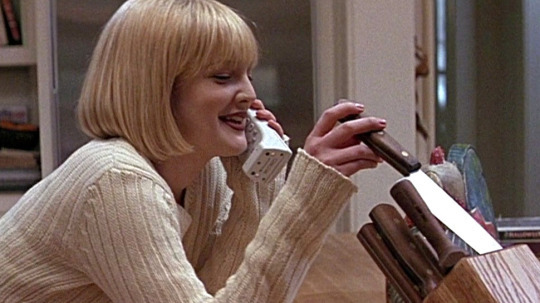 I saw the original Scream when it first showed in cinemas 25 years ago and I thought it was… fine.

At the time I recognized what master horrormeister Wes Craven and his collaborators were doing — a clever and ironic take on all the horror tropes and cliches Craven indulged in and exploited in earlier films — but I was never part of this film’s cult of enthusiasts. I may also have been just a little too old at that point for a series solidly marketed at teenagers — I never bothered to keep up with the American Pie series for similar reasons.

Now, with the Scream legasequel in cinemas, it seemed like a good time to revisit the four original films. All of them can be found streaming on Amazon Prime. 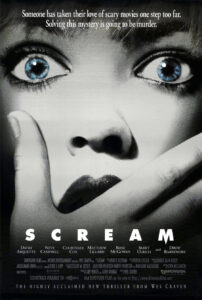 So much can change in 25 years.

The first thing I notice watching the original Scream again is the casual wealth. With the slow collapse of the middle class in the United States, we don’t see a lot of people in movies with this kind of comfort unless that’s a core part of the narrative — people getting rich or desperately trying to stay rich. Here everyone is wealthy, white, and they live in big houses — more places to run from knife-wielding manics. 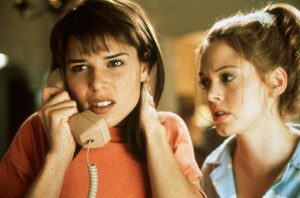 The second is the speed of the narrative — this is a movie that’s in a hurry to get where it’s going, which is to its credit, but includes plenty of important character and plot detail to keep us guessing the identity of the killer.

Finally, there’s the omnipresence of the soundtrack, typical for movies aimed at teen audiences at the time — Gus’ cover of “Don’t Fear The Reaper,” Nick Cave’s “Red Right Hand,” and Republica’s “Drop Dead Gorgeous” all feature — along with the horror score by Marco Beltrami that helps drive home the scares.

The story, for those who don’t remember, has a serial killer in a ghost mask murdering high school students in an American town called Woodsboro. The first to go in the opening scenes is Casey, played by Drew Barrymore, already a big star in ’96. Clever casting by the producers to choose someone so high profile for that role — it raises the stakes for the rest of the less-celebrated cast. It’s clearly the Janet Leigh in Psycho play. 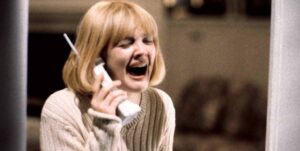 Of that cast, in the lead is Neve Campbell as Sidney Prescott. Her mother was murdered a year before — cue her father, suddenly disappeared, as a suspect in the new killings. Skeet Ulrich is her boyfriend, Billy, and Rose McGowan is Casey’s best friend, Tatum, whose slightly clueless brother is the town’s Sheriff’s Deputy, Dewey (David Arquette). Also on the scene is the impressively named tabloid reporter Gale Weathers (Courteney Cox, having a lot of fun), Matthew Lillard as Stu, and Jamie Kennedy as Randy, the guy who works in the video store who knows all The Rules of Horror Movies.

And what are The Rules? Scream‘s clever script is happy to explain, crammed with self-referential notes, which the audience for this would’ve been entirely familiar. It offers a passel of regular pop culture references, too. I feel bad for Richard Gere and Tori Spelling, both trolled in the picture.

I recall one of the things I wasn’t fond of in the film originally: with the exception of Sidney the teenage characters are complete assholes — watching them die is no hardship. But that kind of works out in the end since most of ’em are dudes and Scream‘s mission seems to be recognizing the sexism in the genre and reclaiming horror for women. 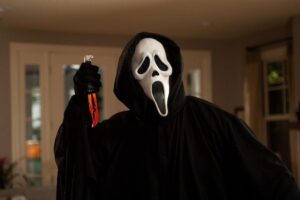 Sidney — despite running upstairs at one point when she says that’s exactly what slasher victims shouldn’t do in these movies — is a smart and capable protagonist, sympathetic with plenty of agency. Campbell brings all the required emotion and then some. Even though she has plenty of reason to be at odds with Gale Weathers they end up a terrific double-team. 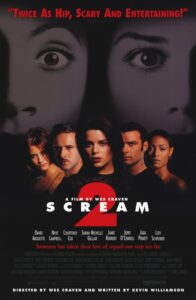 The first thing this quickly turned-around sequel does right is start with two African American characters — acknowledging the popularity of the genre with Black audiences — who go right ahead and criticize the whiteness of horror movies.

They’re Maureen (Jada Pinkett Smith) and Phil (Omar Epps), in line to see Stab, the movie version of Gale Weathers’ book, The Woodsboro Murders. Heather Graham plays Drew Barrymore’s character, Casey, with added Psycho shower-scene shots. Then we get a gruesome murder in the cinema as Casey is killed up on the screen. Plenty of yucks.

Sidney Prescott is still getting disturbing calls from weirdos, but caller ID and Star-69 (ask your parents about that feature, kids) have changed the game. She now attends Windsor College, where she has a good pal and roomie, Hallie (Elise Neal). The man Sidney testified against for her mother’s murder, Cotton Weary (Liev Schreiber), is now exonerated and on the talkshow circuit. Meanwhile, Sidney has a new beau, Derek (Jerry O’Connell). 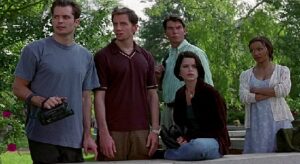 Naturally, Gale’s back covering these new killings — the victims were students at Windsor — though the picture is even more critical of the tabloid media this time out with Gale facing competition from local newshound Debbie Salt (Laurie Metcalf).

Returning from the first film is film nerd Randy, happy to explain The Rules of Horror Sequels, and Officer Dewey, who shows up to help protect Sidney… or so he says. 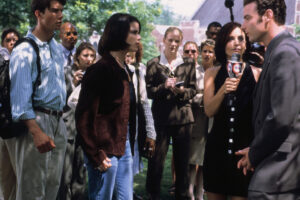 Overall, this Scream is more playful than the first, though somehow less jokey. It’s also less in a hurry to get where its going and accordingly a little baggier. The idea of Sidney being a student actor playing Cassandra stretches plausibility to tearing, though Derek serenading her with the Partridge Family’s “I Think I Love You” in the cafeteria is a good time. We get a bit of character development from Gale — Cox is terrific, again.

As with the first film, it’s Campbell who’s the heart and soul of the thing. Watching these pictures, and remembering her astonishing turn in Altman’s The Company, provides plenty of evidence she deserved a bigger career on the big screen than she’s had.

A horror sequel better than the first? No, but it’s nearly as good. 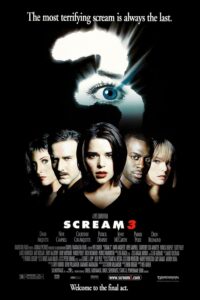 The start of the third movie is plenty familiar: Ghostface terrorizes a woman home alone.

This time it’s Cotton Weary’s girlfriend (Kelly Rutherford) in their LA pad while Cotton himself, now a reality TV host, rushes to try to get back before she’s knifed. Let’s say it doesn’t go well for the couple and once again a bunch of folks are being terrorized by a masked killer. 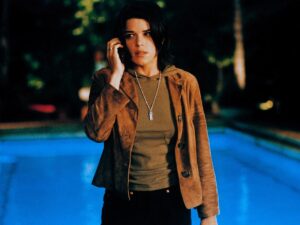 Stab 3 is now in production in Hollywood with Dewey on set as consultant. Gale (sporting some deeply inadvisable fringe) also gets involved when Detective Kincaid (Patrick Dempsey) asks her for her help with the imminent prospect of another murder spree. 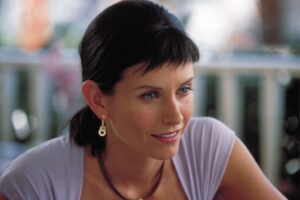 Once again Dewey and Gale are at odds, just like the beginning of #2. It’s a drag. Whatever The Rules of Horror, character progress for any movie series should be one of them.

On the Stab 3 set we meet the next victim, an actress played by Jenny McCarthy, as well as quality support from Emily Mortimer, Lance Henriksen, Scott Foley, Patrick Warburton, Heather Matarazzo, and a couple of deeply weird cameos from Jay and Silent Bob and Carrie Fisher.

And while she’s a welcome addition to the cast, Parker Posey — as Jennifer, a neurotic actor who plays Gale in the Stab franchise — is so over the top it’s hard to take seriously anything happening around her. 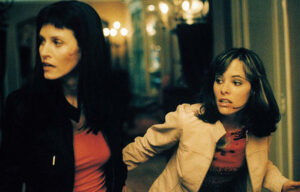 We also get a brief and entirely implausible visit from Randy, making sure to explain The Rules of the third film in a slasher franchise.

All of this explicitly Hollywood nudge-nudge wink-wink feels like an obvious step for the Scream movies, but in doing so Craven also shifts the franchise’s tone toward something sillier, soapier, and a lot more ridiculous than the previous two. This is barely a horror anymore — more a thriller with a couple of light comic touches. The movie also sidelines Sidney for big chunks of screen time, and as much fun as Cox and Arquette are together, we’re never going to care about them as much as we do her. 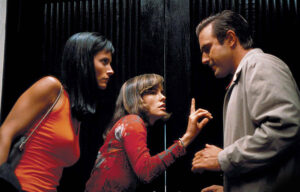 That said, there’s interest in seeing how this “trilogy” wraps up. It’s sloppy and overwrought, but not without entertainment  value. 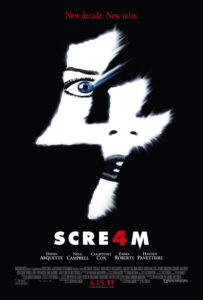 Watching these pictures in close succession it becomes increasingly clear the so-called Master of Horror, Wes Craven, his enthusiasm for this material waxes and wanes. Some of the direction and the visual ideas deliver the requisite scares, and the meta-commentary in the script provides knowing chuckles, but then parts of these films are so cheap they look like network TV from the ’70s — though I suppose an argument could be made that’s intentional, paying homage to the narrative shortcuts in all those low-budget exploitation slashers that inspired the Scream franchise. 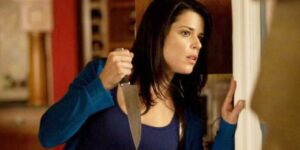 One of the more successful elements of the first two films was trying to piece together the whodunnit puzzle, but the third just about shattered any lingering suspension of disbelief. The fourth manages to reclaim that with a dynamite reveal along with a lot more gore and effective jump-scares. 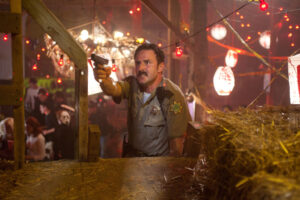 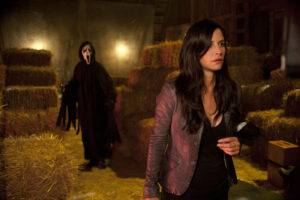 Sidney has written her own book about resisting being labelled a “professional victim” launching at a Woodsboro bookstore (courtesy of her promoter, the excellent Alison Brie as Rebecca). Gale and Dewey (whose moustache is finally looking less like a worm on his upper lip) are married and living in town, even though Gale claimed in the last picture that Woodsboro was a soul-crusher. She’s not especially happy here now, trying and failing to write fiction. When bodies start piling up Gale wants to be part of the investigation, to the chagrin of Dewey and his new deputy, Judy (Marley Shelton). 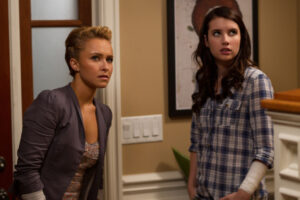 The teen cohort is fascinated by the attention the previous murders — and the movies they inspired — have brought to their town. Solid turns from Hayden Panettiere as Kirby, Emma Roberts as Sidney’s cousin, Jill, and Rory Culkin as movie geek Charlie, help keep us invested — nobody’s as irritating as Matthew Lillard was back in the first one. Also, Anthony Anderson and Adam Brody appear as cops. Weirdly, they cast the amazing Mary McDonnell as Sidney’s aunt and then give her nothing to do. 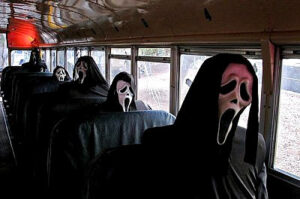 But this edition of Scream does manage to recover some freshness the third film was missing. If a conclusion is surprisingly critical of teens’ fascination with social media fame — skirting the edge of browbeating the very audience that helped build this franchise — surprises in the plotting help the picture turn away from the built-in repetition that comes with a franchise working with a narrow suite of genre demands. This one’s more fun than it needed to be.

Check back on FITI for the review of Scream (2022), coming soon.