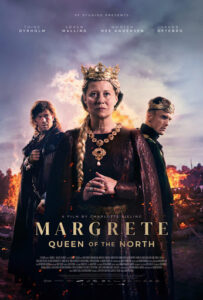 Scandinavia, 1402: Queen Margrete I (Trine Dyrholm of Love Is All You Need, and In A Better World ) rules Denmark, Sweden, and Norway — governing through her adopted son, King Erik (Morten Hee Andersen). It’s the first time in centuries the nations haven’t been at each other’s throats. Now Margrete must build an army and negotiate with England to keep the Teutonic Germans from her borders.

But just as the negotiations reach a tipping point, a man appears (Jakob Oftebro) who claims to be the Queen’s son, King Olaf, who was thought dead 14 years before, throwing Erik’s authority and the union itself into doubt. The Queen’s cloistered advisor, Peder (Søren Malling, Torben Friis from Borgen), tells her to execute the man for being a traitor, and while she considers that she sends agents into Germany to seek the truth of the conspiracy to undermine her power. 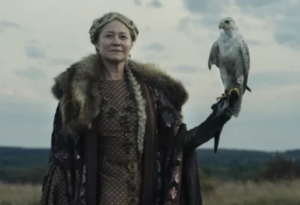 With much of the drama confined to a single castle, I’d compare this favourably to both A Royal Affair and The Lion In Winter, two terrific examples of the kind of game of thrones at play here. The film opens a window into a fascinating piece of Nordic history, and Sieling chooses a satisfyingly operatic tone to both the score and the look of the thing — gothic and grim all the way around.

(It’s the Danish way, says my Danish-born mother. Our history isn’t a lot of laughs.) 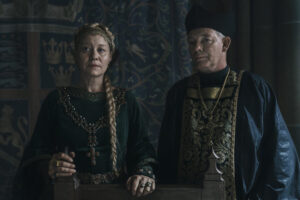 The film also features a solid performance in its centre: Dyrholm is entirely plausible as a woman used to wielding power in a man’s world, cajoling and manipulating the men around her to agree to what’s best for the union. She has to be twice as strong, twice as smart, when half as much is expected of her.  When faced with the possibility of a son she thought lost she risks losing the allegiance of the one she chose — it’s a seemingly impossible crisis that twists in unpredictable ways.