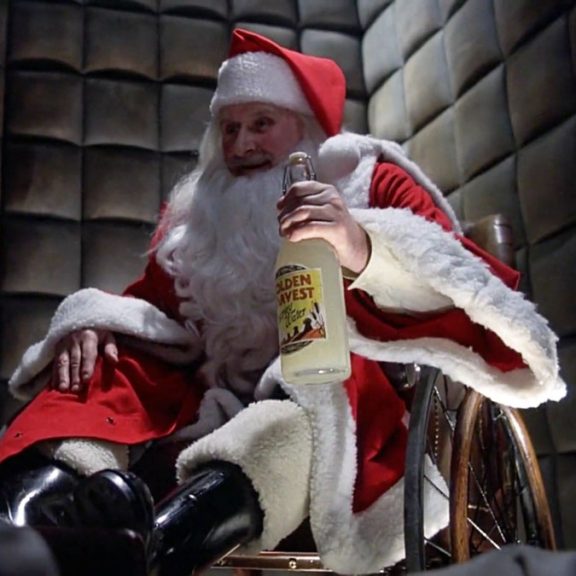 I’m just about done with all the X-Mas hubbub—the relentless advertising, the schmaltz, the earworms on a loop at the grocery store. And if you’re like me, you have some ambivalence around the holidays, along with movies that celebrate Christmas.

Sure, I’ll probably watch about 30 minutes of the evergreen It’s A Wonderful Life on one of its dozens of TV airings in the next few days, and I’ve got nothing against Miracle On 34th Street, A Christmas Story, or any of these heartwarmers. I also enjoy the accepted alternatives: Bad Santa and Gremlins come to mind. There are also a number of more subtle seasonal options, the non-Christmas Christmas movie, where December festivals play a supporting role, not the lead.

Here are a few suggestions:

In the past few years, Die Hard (1988) has become the Alternative Christmas Movie, and it’s entirely worthy of the crown. One of the great action movies ever, it’s packed with great characters, comedy, and it just happens to be set at Christmas in Los Angeles. Bruce Willis brings the sneer and Alan Rickman launches the trend of British thesps as Hollywood villains—even if they’re playing Germans. It opens with “Jingle Bells Rock” just before a cocaine and suicide scene. Then Detective Martin Riggs (Mel Gibson) demolishes a TV set to shut up a Christmas commercial (very satisfying), and single-handedly blows away a sniper at a grade school. Before long he’s looking to plug his own nickel to a Looney Tunes Christmas cartoon soundtrack. This is pretty grim stuff for the holidays, even if the thematic subtext is happiness in family. You’re gonna love it, especially if you appreciate flagrant mullets and sax on the soundtrack.

( For further seasonal treats, Lethal Weapon screenwriter Shane Black has a thing for Christmas movies: He wrote a couple other action pictures set at the holidays—The Last Boy Scout and The Long Kiss Goodnight, and there’s Kiss Kiss Bang Bang, which he wrote and directed, giving some much needed traction to Robert Downey Jr’s career at the time. And, of course, his Iron Man 3 is also set at Christmas. All are full of good cheer and guns. )

If your family drives you nuts at this time of the year, the 1968 drama The Lion In Winter will definitely help put things in perspective. A historical piece about Henry II (played in all his barking glory by Peter O’Toole), who lets his wife, Eleanor of Aquitaine (an equally bellow-y Katherine Hepburn), out of her tower for Christmas. He keeps her there through the year because otherwise she has a tendency to go to war against him. And their sons are equally ambitious—John (Nigel Terry), Geoffrey (John Castle), and Richard The Lionheart (Anthony Hopkins, in his debut role). They’re all stuck together for the holidays, along with Prince Phillip II of France (a very pretty Timothy Dalton), scheming for strategic advantage. The dialogue is dazzling, especially in the first act, and very funny, too. And it will make you grateful for the less power hungry and deceitful amongst your loved ones. There’s even a John Barry score: A few others to consider: Stanley Kubrick’s final feature Eyes Wide Shut (1999). Maybe it’s all a Christmas nightmare as Tom Cruise wanders around a weird and pagan New York City (replicated on the sound stages and streets of London) at night, looking to get laid and never quite managing it. The film’s reputation as a lesser Kubrick isn’t entirely accurate—just try and cleanse your brain of its imagery in the days after watching, which might be a perfect distraction during forced Christmas dinner conversation. The adaptation of the Peter Hoeg novel is set in chilly Copenhagen around Christmas, before it sets off to Greenland in the final act. Julia Ormond is in fine form as Smilla, an intense and independent amateur scientist who investigates the death of a boy she was close to, the son of an alcoholic neighbour in her building. The cast is stuffed full of great actors either putting on or hiding their accents, including Jim Broadbent, Tom Wilkinson, Richard Harris, Gabriel Byrne, Peter Capaldi, Robert Loggia, and Vanessa Redgrave. (When an actual Dane shows up with a speaking part, it’s a shock.)

The dialogue does at times feels a bit forced, and when, in the last 20 minutes, Smilla turns into the roaming daughter of Indiana Jones and James Bond, abseiling down the side of Russian freighters (though credit Ormond with doing her own stunts there), it begins to feel like a very different kind of movie. Still, well worth inclusion as a Christmas thriller alternate. If you haven’t seen it, or even if you have and you are looking for something wonderfully satiric on the cusp of a new year, watch Terry Gilliam’s bleak Christmas-set future vision Brazil (1985). For anyone who struggles with Orwellian bureaucracy bordering on totalitarianism and suffers with consumerist bullshit—and who doesn’t?—there’s some bitter laughs here to be found.

“You know what I like best about Christmas? The surprises.“ Go (1999) has a few of them, including that opening line. Unfortunately, there’s also something about Go’s 90s jitteriness and BT soundtrack that has aged poorly, along with Scott Wolf’s so-called appeal— dimples can only get you so far, pretty boy. But Sarah Polley, Timothy Olyphant, and even Katie Holmes’ presence makes it worth seeing, and it’s the only Christmas-set drug movie I can think of, so it earns a place as the X-Mas Ecstasy Alternative. Keep your eyes open for the blink-and-you’ll-miss-it Melissa McCarthy cameo.

One True Thing (1998) may be the the most heartrending Not-Christmas Christmas movie I can think of, and that’s why I mention it. Based on the Anna Quindlen novel, it stars Renee Zellweger as Ellen, a New York journalist who has always lived in awe of her Harvard prof father (William Hurt, as cerebral and austere as ever) and has to put her whole life on hold to come home and take care of her cancer-striken mother (Meryl Streep). The illness progresses as we go from Halloween through American Thanksgiving and Christmas, all those rituals around family as winter sets in, and Ellen begins to see how her mother, who she was never close to, has for years managed all the family details, taking care of her husband and ignoring his ego and infidelities. It skates into sentiment sometimes, especially in the plinky score, but for a mainstream Hollywood picture it faces up to some very hard truths of life in a sincere way. Streep, as usual, raises the material in her every scene, and Zellweger is pretty fine, too. I don’t know that I quite buy her as a muckraker, though.

Finally, I’m putting 84 Charing Cross Road (1987) on this list. It’s a bit of a stretch since it actually takes place over nearly 20 years and Christmas only features in a small part of it, but gift-giving and kindness-across-continents is a key element. It has the spirit but in a restrained, classy way that never feels overplayed or schmaltzy. Based on a true story, the film documents the correspondence between New York playwright Helene Hanff (Anne Bancroft) and London bookseller Frank Doel (Anthony Hopkins, again) and their shared love of antiquarian books. Gorgeous use of Manhattan and London’s West End locations, marked with deft fourth-wall-breaking moments, are a big part of the appeal and makes material work that isn’t terribly cinematic. Hanff becomes more than just a customer to the staff at the London bookstore Marks & Co. when she sends the staff much needed food during times of austerity, especially one Christmas in the early ’50s. Next to Mrs Robinson I think it’s Bancroft’s best performance, and for lovers of reading, and letter-writing, it’s essential.  As anyone who’s been in those cities at this time of year will tell you, it’s just the best.