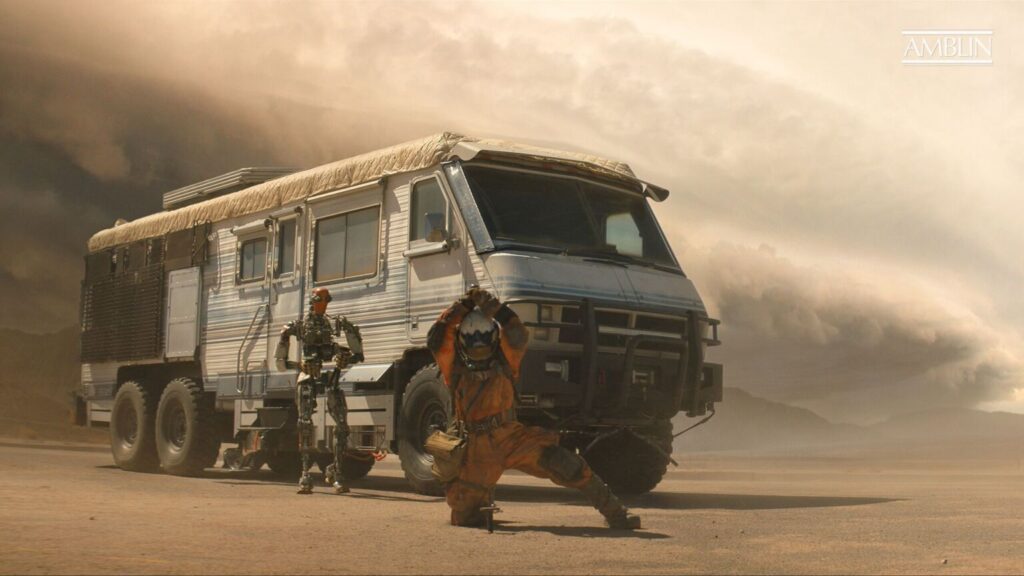 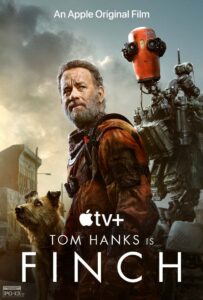 Finch is a throwback to a sub-genre of post-apocalyptic movies that saw its zenith of popularity in the 1970s, pictures like The Omega Man, and A Boy And His Dog. They illustrate a Last Man on Earth-styled scenario, where our survivor has only the company of a loyal dog or a robot, if anything at all. By the 1980s the genre had stepped away from the existential and ontological toward The Road Warrior, but the original take still crops up now and then, like the Will Smith blockbuster, I Am Legend or the Pixar film, Wall-E. 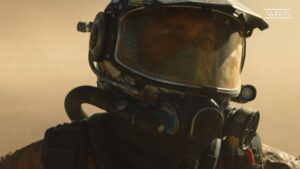 This time we’ve got Finch Weinberg (Tom Hanks), a scientist and engineer holed up in a St Louis lab, mostly safe from the intense heat and radioactive wastes, though he ventures out occasionally with his dog, Goodyear, and very Wall-E-esque robot, Dewey, whose name is a nod to another post-apocalyptic picture from the ’70s, Silent Running. 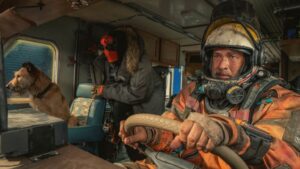 He’s been working on a new project, an ambulatory robot who can learn — voiced by Caleb Landry Jones. Finch doesn’t have much time to teach his new creation — who chooses to be called Jeff — because a “superstorm” is on its way. This man, his dog, and his ‘bots head west in an RV that looks a little like the one in Damnation Alley (1977), a collection of postcards in store offering the hope of escape to faraway destinations like the Golden Gate Bridge. 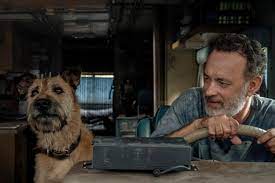 It’s no hardship to enjoy Tom Hanks doing what he does so well in a part like this, and you’d be forgiven for remembering him spending so much time alone in Cast Away. The key relationship here is between him and Jeff, who ends up being a lot more expressive than Wilson — Jones brings a cute enthusiasm to this AI who mostly just wants to please his increasingly grumpy maker. 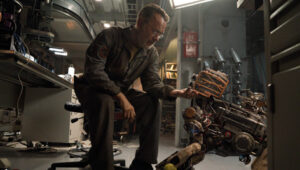 And all of that is fine. Finch doesn’t necessarily reimagine the recipe for this dusty sub-genre of science fiction as much as stir the pot slightly, reheating the flavours and reminding us these films can touch us with a little sentiment and some decent production values.

You won’t get so much the Manhattan zombie attack that Will Smith had to deal with, for instance. Finch is a more mellow, more melancholy road trip with the odd tornado evasion. I did wonder how both Finch’s RV and Jeff are powered across the hundreds of miles of desolation — especially after an accident wrecks its solar array — but I suppose we need to take it on faith that technology, even after the apocalypse, is a lot more self-sufficient than it is now. 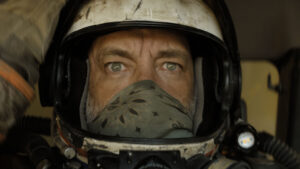 You could almost call Finch a family movie take on the dystopia yarn. The only thing it’s left me wondering is why there are so few Last Women On Earth pictures.