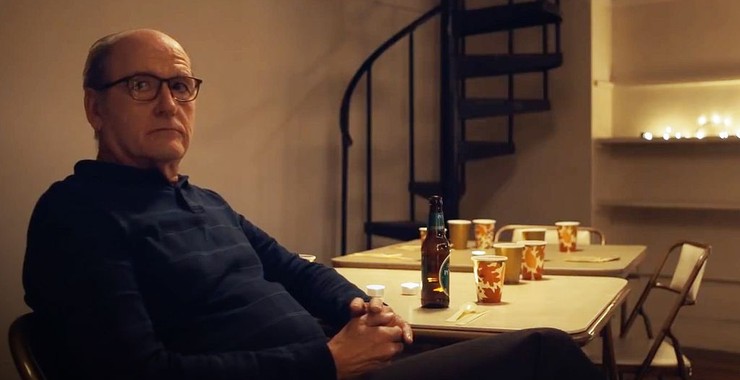 Written and Directed by Stephen Karam | 108 min | Crave Plus 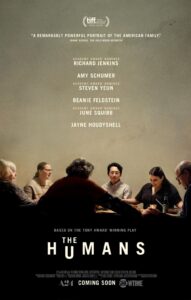 American studio A24 continues to deliver unusual and quality indie pictures, though maybe hasn’t quite figured out how to market them.

Witness the trailers for The Green Knight. A24 tried to sell the movie as a horror. It really isn’t — it’s more an auteur’s art house fable. The trailer for The Humans sells it as a dark comedy when in fact it’s a psychological horror, one of the most bleakly impactful movies I’ve seen in a long time. Imagine a less demonic Rosemary’s Baby spliced with the stark family drama of Chekov, as aptly delivered as, say, Vanya on 42nd Street. 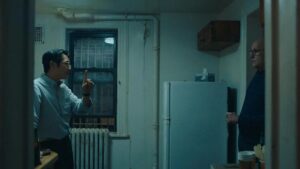 That New York staging of a Russian play is especially relevant. Writer-director Karam, adapting his own stage play, sets his scalding, single-location drama at American Thanksgiving with three generations of the Scranton, Pennsylvania’s Blake family. Brigid (Beanie Feldstein) has just moved into her Manhattan apartment somewhere near Chinatown. It’s split level but all the windows face into a courtyard so even at midday it’s twilight. 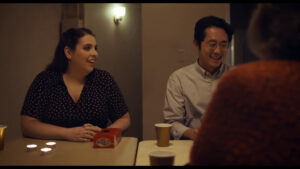 Joining her for the family gathering is her new boyfriend, Richard (Steven Yuen), her sister Aimee (Amy Schumer), recently heartbroken and facing a health crisis. Also present are Brigid and Aimee’s parents Erik and Deirdre (Richard Jenkins and Jayne Houdyshell), who are dealing with both financial and relationship problems, and grandmother, Momo (June Squibb), who is four years into a dementia diagnosis and requires constant care.

Together they have a memorable, terrible Thanksgiving day complete with the bubbling up of long submerged trauma, resentments, and the sharing of secrets. At one point Erik says, “Don’t you think it should cost less to be alive?” Is he talking about actual debts or a daily emotional toll?

And all of that stuff audiences would’ve seen in the stage play, but what’s maybe most impressive about Karam’s adaptation is how many ways he brings cinematic elements into the story told in a single location. Much of what we get is actually told from Erik’s perspective as he wrestles with self-recrimination and anxiety — the apartment reflecting what’s going on inside him; shadows through dirty windows, stains on the ceiling, bubbling and peeling paint, rusted, ancient pipes. It’s a portrait of illness and decay, and it’s mostly unfurnished.

To be sure, the apartment is a main character, maybe even the film’s protagonist. 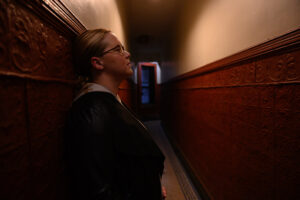 Karam and cinematographer Lol Crawley frequently shoot the family down hallways and through narrow doorways, trapping us in here with them while still keeping us at arm’s length, like we’re watching them through the plumbing pipes. Full marks to production designer David Gropman and the whole sound department for the sudden banging, clattering, and machine noises that echo up through the floors and walls.

This is harrowing stuff. It’s well done, but will require a strong constitution and is strongly recommended for people who appreciate emotional horror over the more gory variations. 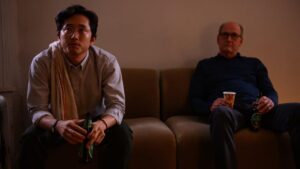 Erik ends up saying what The Humans seems to be about: We all lose everything when our lives are done. The best thing we can do is hang onto the people who are important to us because, in the end, we’re left sitting in the dark with our fears and uncertainties, helpless to stop what’s coming.