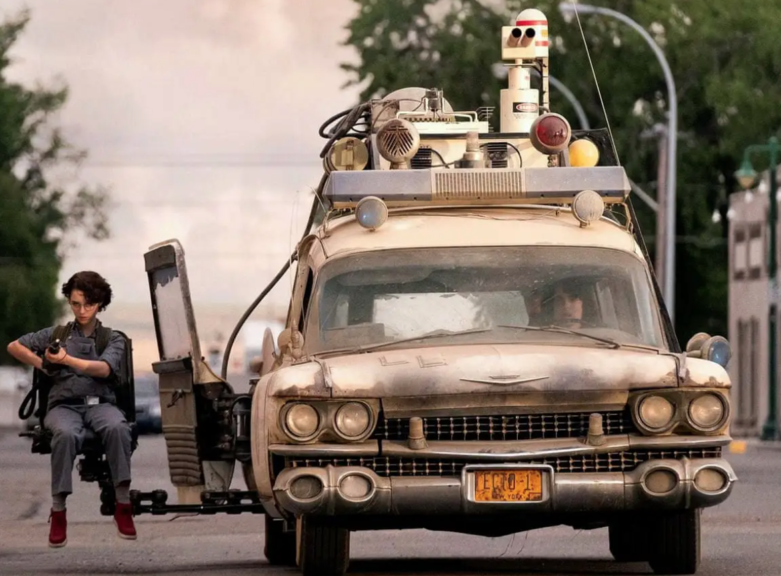 Directed by Jason Reitman | Written by Reitman and Gil Kenan, based on Ghostbusters written by Harold Ramis, Dan Akyroyd, and an uncredited Rick Moranis | 124 min 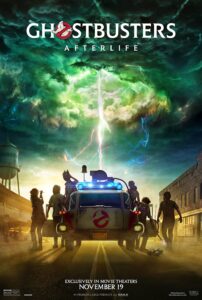 Another “legacequel” comes down the pike, and on the surface this seems like the most cynical kind of Hollywood factory product.

“Oh, so you whiny Ghostbusters fans didn’t like it when the ladies strapped on the proton packs back in 2016? Here’s something that’ll serve your fandom even featuring appearances from the original crew in uniform! It’s a theme ride standing in as a movie!”

What a surprise, then, that Canadian-born Jason Reitman, son of original Ghostbusters director Ivan Reitman and filmmaker responsible for Juno, Young Adult, and Tully, would slip so comfortably into his father’s shoes to make a Ghostbusters movie that doesn’t feel especially calculated. It’s light, sweet, and for the most part delivers as a popcorn picture. 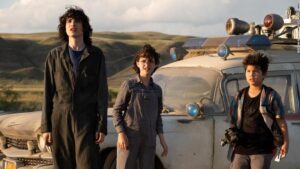 The immediate masterstroke is to move the action away from New York to the rural Midwest and make it all a lot more kid-friendly.

Callie (Carrie Coon) is a single mother who’s just inherited an old farmhouse and property in a town called Summerville, Oklahoma, when her estranged father passes away. With two kids in tow — Trevor (Finn Wolfhard, really cornering the market in ’80s-related material with this, It, and Stranger Things) and Phoebe (Mckenna Grace, the very best thing in this movie) — Callie moves into this weird, haunted old house. The locals called her father The Dirt Farmer, and no one is really sure what he was up to out there. He sounded like, at best, an eccentric. 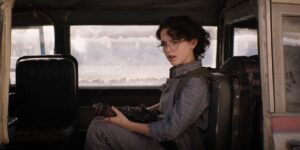 So, here’s the mystery to be unravelled: Who was Callie’s father, and what was he up to? Phoebe is the first to start to piece it together with the help of a classmate named Podcast (Logan Kim) while Trevor makes time with a group of implausibly hip teens, including Lucky (Celeste O’Connor). This while Callie starts to get friendly with the local summer-school teacher, Gary Grooberson (Paul Rudd), who’s also a seismologist investigating regular earthquakes in the area.

Of course, it turns out the kids’ grandfather is one of the original Ghostbusters, Egon Spengler (the late writer/director/actor Harold Ramis). The appearance of the Ecto-mobile, proton packs, even ghost traps, kinda gives it away. And when we start getting references to Zuul and Gozer, you know we’re going deep into well-trod territory (with much better special effects). 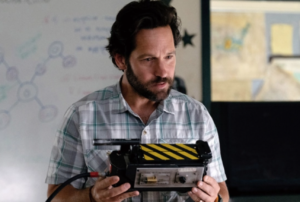 And all of that is fun stuff. Sure, you can feel the wheels of the plot leaning in to references the original film, even to the 1989 sequel where we saw a movie marquee featuring Ivan Reitman’s 1973 horror- comedy Cannibal Girls — it’s also playing in Summerville — but you don’t need to have seen it to enjoy what this has to offer.

The best bits here are with the kids, especially Grace and Kim who get all the funniest lines. Full marks to Rob Simonsen for the delightfully John Williams and Jerry Goldsmith-esque score, helping channel that particular Amblin-styled ’80s movie magic in support.

If the appearance of the original Ghostbusters feels a little shoehorned, by that point the picture’s built up enough goodwill with the new cast that you can forgive Reitman (and his father, here as producer) the prescribed nostalgia. Two post-credit scenes feel a little too Marvel-ous to applaud, especially when all it does is help set up another potential franchise extension. 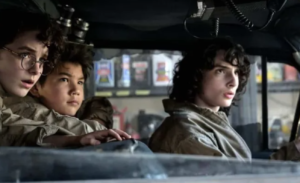 Still, this is a good time. It’s almost a shame Ghostbusters: Afterlife wasn’t released in the summer. It’s got the spirit of a drive-in movie, which is exactly what people loved about the original. 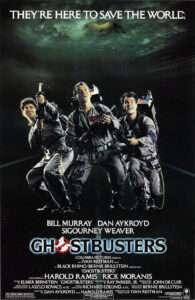 Is there any point in reviewing what’s largely considered a comedy classic? I mean, who hasn’t seen Ghostbusters? It’s actually been many years for me, so I came to it with new eyes.

What’s odd in retrospect is the movie isn’t laugh-out-loud funny, but it is damn entertaining. That’s more to do with the performances than the script, and it’s just scary enough to make you jump in your seat occasionally but shouldn’t be frightening enough to give anyone nightmares. Maybe the little kids. 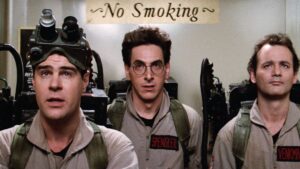 The Ghostbusters are researchers at Columbia who lose their grant and get booted off campus. The hastily assembled plan is to use their expertise with the paranormal to start a business bustin’ ghosts out of an old firehall downtown.

Bill Murray stars as Peter Venkman, who despite getting the lion’s share of sharp lines is a guy you wouldn’t want to meet at a party — he’s way too creepy and into himself. His colleagues are Ray Stantz (Dan Aykroyd), goofy and boyish, and Egon Spengler (Ramis), painfully serious but not exactly socially adept. 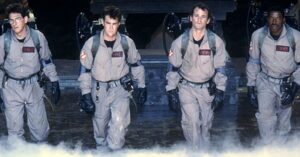 Cellist Dana Barrett (Sigourney Weaver) is their first client, coming to them after she sees some strangeness in her kitchen. It turns out her Upper East Side penthouse is located at Spook Central, a deeply peculiar apartment building that’s a conduit for an ancient Sumerian demon.

Venkman takes a shine to Barrett and won’t take no for an answer — definitely creepy. Her neighbour, tax accountant Louis Tully (a terrific Moranis), is also interested in her and ends up playing a key role.  The other support is solid, though we could’ve used more of the awesome Annie Potts and Ernie Hudson. William Atherton is the only non-supernatural villain, apparently a toadie from the Environmental Protection Agency. That seems like a particularly bad joke many years later. 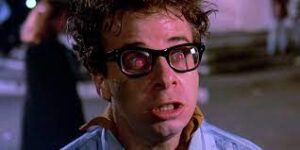 The movie trots out some pretty shoddy special effects around the paranormal beasties, but for the most part we get to laugh at it all, with lines like “Generally, you don’t get that kind of behaviour in a major appliance.” when Barrett’s fridge opens a gateway to another dimension, and “When someone asks if you are a god, you say yes!”

The 100 ft. marshmallow man is still the high point. 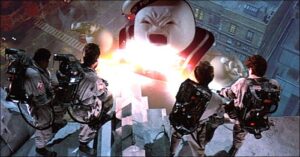 One of the things that still works for Ghostbusters is how pacy it is — the hour and 45 minutes just fly by — and at no time does it ever seem especially self-conscious or bogged down in blockbuster cliche. It’s just your everyday comedy about dudes who find and capture spirits from beyond.

Things that haven’t aged well?  Many of the Ghostbusters smoke, and it’s weird how it doesn’t even seem like a character note. It’s just something they did because it was normal, even in a largely family-friendly comedy. 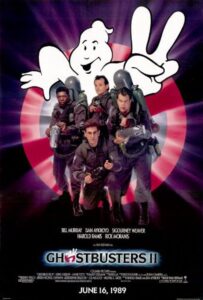 It’s five years later and the cast’s hair has gotten a lot bigger. The Ghostbusters, however, are in rough shape.

Stantz and Zeddemore (Hudson) are dressing up in their uniforms to entertain kids, while Ray also runs an occult bookshop. Venkman has capitalized on his sleaze, hosting a TV talkshow featuring psychics, and Spengler has gone back to work in research. Dana Barrett’s working at a museum with a Janosz Poha (Peter MacNicol doing a ridiculous accent), who is as interested in her and as clueless as Tully was in the last picture. And Barrett has a baby, presumably the product of the relationship she had after she split with Venkman.

Vigo the Carpathian is the scariest thing in this movie — an immortal villain with a death glare trapped in a painting at the museum. In order to be reanimated he needs a child. How handy that Dana has one. Then there’s the river of ectoplasmic sludge running beneath the city that reacts to human emotions. When the ‘Busters detect it, they get busted themselves for digging a hole in the street, which lands them promptly in court.

Up to this point it feels like this is going to be a decent sequel, but you can feel the wheels come off the Ecto-mobile. The gags are sillier and dumber this time around — too much winking at the camera, and the performers seem a lot less committed to the material.

Eventually they get back to business, the uniforms and the proton packs, but this already feels a lot less pacy and a lot more tired. Even with the return of the excellent Potts with great new hair and glasses. 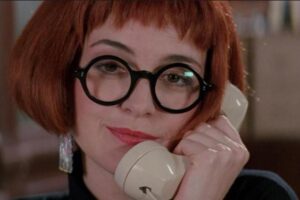 In the previous film she seemed to have a thing for Spengler, but here she takes a fancy to Tully! Not sure how to feel about that.

Things do improve in the final act for the showdown with Vigo and the evil slime, and we get a Cheech Marin cameo, but the film still feels about half the fun of the former.