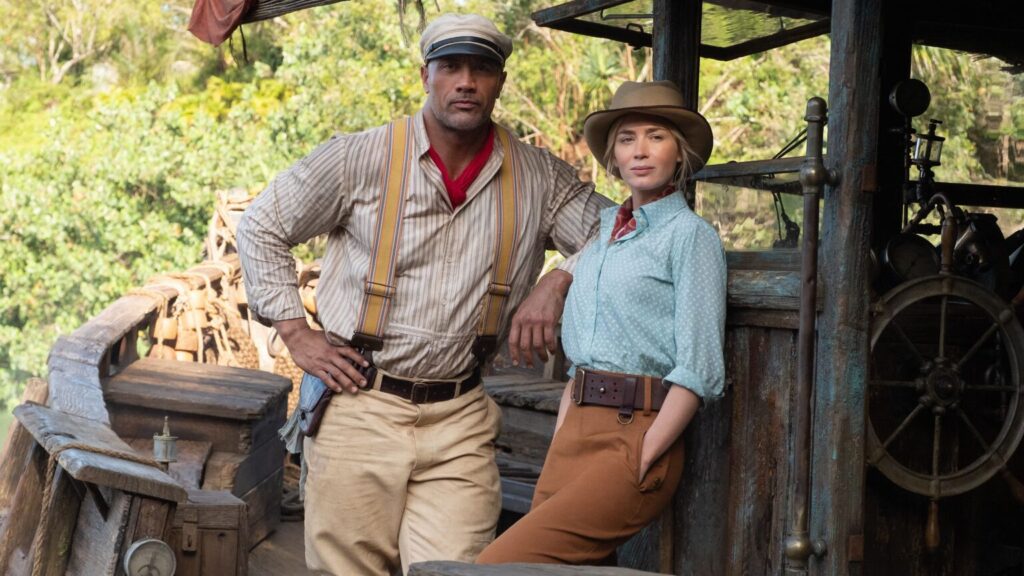 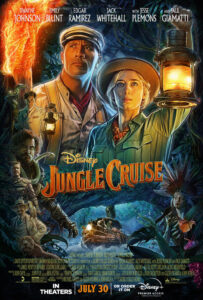 Almost 20 years ago, Dwayne “The Rock” Johnson’s first starring role in a feature was a picture called The Scorpion King, an entertaining spin-off of The Mummy Returns, itself a sequel to The Mummy, a remake (are you still with me?) to which Jungle Cruise is deeply indebted. It’s too bad, then, that this Disney effort, directly inspired by a theme-park ride, doesn’t feel like Johnson’s return to the good times of his early work, but a watered-down-for-kids, tiresome CGI fest. 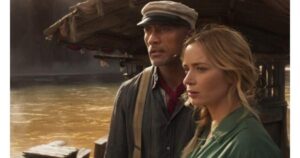 It’s set in 1916, where British lady Lily Houghton (Emily Blunt), who conveniently happens to be a crack lock-breaker, is on the hunt for a mythical, magical medicine, The Tears of the Moon, which can only be found in the deepest Amazon. In London she “liberates” a key piece of the puzzle, an arrowhead that will somehow help her find these Tears, but the movie doesn’t offer anything resembling a coherent mystery for us to unwrap. Indeed, it just feels like the screenwriters, all six of them, including two who were responsible for much better work like Bad Santa and Focus, are just making stuff up as they go along.

As it turns out the first act of this factory-made entertainment isn’t bad, as far as calculated pastiches of The Mummy and Raiders Of The Lost Ark — actually, more like The Kingdom of The Crystal Skull — go. Blunt is typically winning, and Johnson, as Lily’s grizzled jungle guide, is always likeable. He calls her “Pants” since she wears them, unusual in 1916, I guess, and she calls him “Skippy.” It’s kind of adorable. This as the effort to create a junglescape — filmed largely in studio with some Hawaiian exteriors — is entirely false, complete with the least convincing CGI jaguar in cinematic history. I expect the actual ride is more convincing. 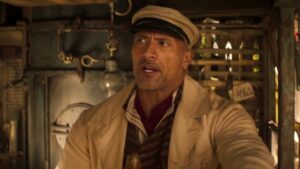 We also get the welcome presence (though not enough of it) of Paul Giamatti as a greedy merchant and Jesse Clemons as a baddie with an outrageous German accent and a submarine.

I kept hoping the film might pick up some of that original Pirates Of The Caribbean spirit, a movie also based on a theme-park ride, where we get just enough realism in play to help buy into the fantasy. No such luck here.

As we go down the river we get more unconvincing CGI environments and a confusing subplot involving undead conquistadors that feels more Highlander-inspired than one might expect in a movie ostensibly for younger audiences. (Though, granted, that confusion was made worse for me because the screener I was sent had no subtitles for the sporadic Spanish.) The talented Edgar Ramírez appears but barely registers.

The movie also delivers a whole bunch of hokum about how Johnson’s Frank has set up these outrageous fake-outs in the jungle for the sake of paying tourists, including a whole village of natives who pretend to be cannibals. It’s hard to get a sense of the real stakes when everything Frank says turns out to be lies, and nothing else on screen seems real.

Even harder to parse is the presence of Lily’s brother, MacGregor (Jack Whitehall). Very much like the relationship of siblings Evelyn (Rachel Weisz) and Jonathan (John Hannah) in The Mummy, he’s on board to offer fey reactions to Lily’s courage and capabilities. Then we get an unprompted confession of his homosexuality, which given it has no other bearing on the story, feels token. Previous to that he was just a sheltered, upper-crust Brit, but after he admits his identity we’re forced to calculate his pompous, effete behaviour as a total gay cliche. One step forward, one step back, Disney.

The finale, when it finally arrives about 30 minutes later than it should have, ends up in a too-dark cave of digital slurry. By then, it’s hard to care about any of it. 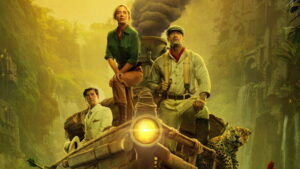 The film decides somewhere along the way to coyly suggest romance between Lily and Frank, which is a total non-starter. Dwayne “The Rock” Johnson’s gifts are many, but romantic leading man is a weight he has yet to lift. Beyond that, he and Blunt, as fetching as they are, don’t ignite the slightest jolt of chemistry — you never for a second believe these two want to get it on.