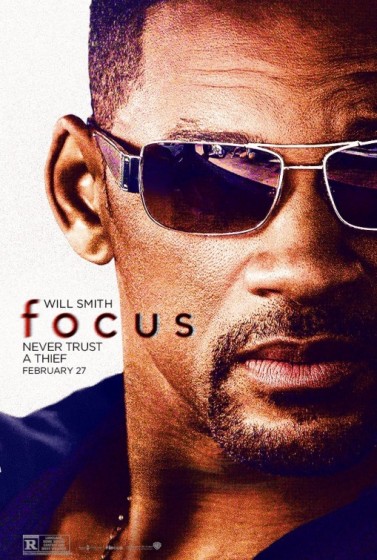 Written and directed by Glenn Ficarra and John Requa

The con artist movie is a special kind of beast. It only works if we’re fooled along with the mark. Knowing what we’re in for, we’re pretty hard to fool.

So, just having achieved that, having met the intricate demands of this particular thriller subgenre, is an achievement worth congratulating. Focus does exactly what its lead, Nicky, purports—it dazzles you with style and sleight of hand trickery and before you know it your rings, watch, and wallet have wandered off. But instead of being pissed off, you’re kind of impressed.

But what does Focus have to offer beyond that trick? Wellll… 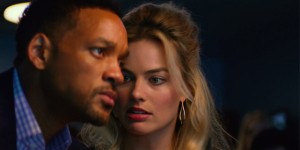 One of the primary pleasures of Focus is watching Smith retake his throne. For years he’s been a movie star looking for a role that capitalizes on his charm, something that will allow him to reascend to his position as the King of Hollywood, and he’s found it in Nicky. Ficarra and Requa allow him to manifest his best Clooney-in-Out of Sight-crossed-with-Denzel coolness, with an added dash of Cary Grant, dressed in the silkiest of wardrobes, strolling through high end restaurants and hotels in New Orleans and Buenos Aires, with Iggy Pop and Junior Kimbrough on the soundtrack.

Opposite him is a star ascendent: Margot Robbie plays Jess, matching Smith step for step, first as his protégé and then as a player in her own right. 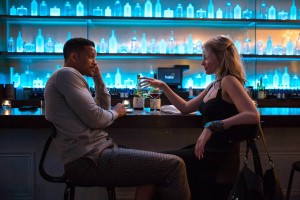 Nicky is a leader in his business, running teams of pickpockets and confidence artists—including the hilarious Adrian Martinez as Farhad—at the Super Bowl, and then later at a Formula One event. Big spenders having a good time mean big bucks for people who take advantage of others. And that, weirdly, is fun to watch. But to give you too much insight into the plot would steal away the good time of the thing. I will mention professional deception expert Apollo Robbins is a consultant, so you know you’re getting genuine juice on the most elegant thievery.

There is at least one major scam that you will definitely not see coming, and it’s the highlight of the movie. It may be beyond implausible—it involves a 100-1 gamble—but the script and performers deftly sell it.

Where does the con stall? Well, it’s mostly in the love affair, the thing that’s supposed to give the story its emotional weight. Nicky has the power to con anyone on almost anything, but there is something amiss if he can’t compellingly get us to buy that he’s obsessed with Jess, which is a key part of the story when it flips from the US to Argentina. It’s not that we suddenly believe after a lifetime of lying he’s finally being earnest, but we should believe he’s at war with himself, with his own callous self-interest versus his love of Jess, and we don’t. If we don’t, she shouldn’t, and that’s a problem. He just doesn’t manage to find Nicky’s heart—the genuine vulnerability his character should have remains too abstract.

This absence doesn’t sink the entire operation, but it does mean the mission dangerously wobbles somewhere between the midpoint and the third act revelations, when we have to assume a genuine emotion rather than see evidence of it.

But that isn’t the end of the world. It just means the elements mentioned earlier that dazzle, all those gorgeous, sparkly bits of wardrobe, music, and production design, not to mention the beautiful, often barely dressed people on screen, will have to sustain you. But when those baubles are as deliciously shiny as this, it’s often enough.