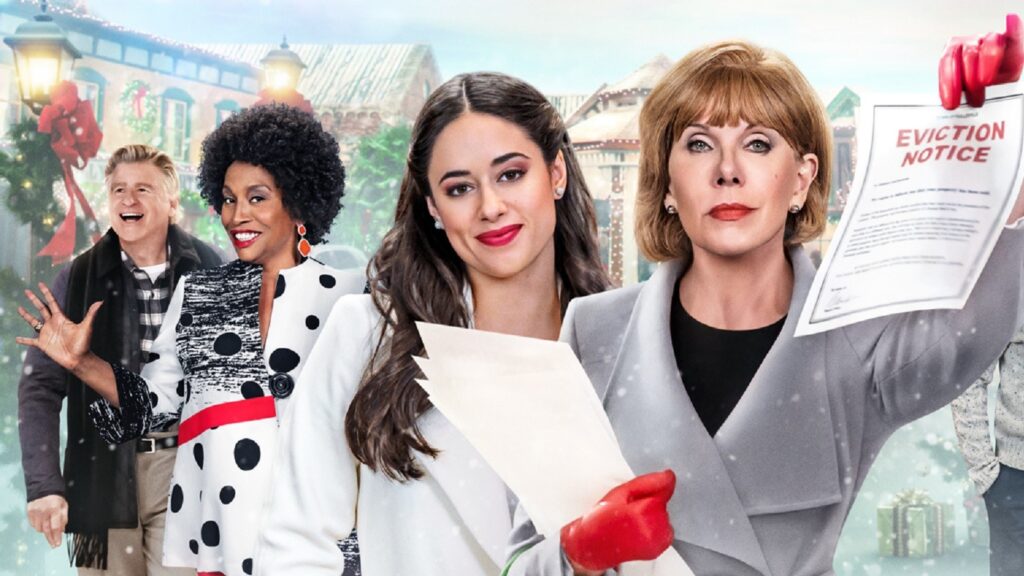 Directed by Debbie Allen | Music and Lyrics by Dolly Parton, written by Maria S. Schlatter, based on her stage play | 98 min | Netflix 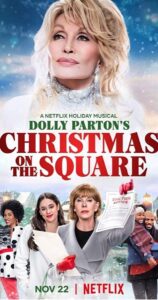 It’s entirely possible this doesn’t qualify as cinema at all, given that it’s produced by Warner Brothers Television, but either way Christmas on the Square is just awful. I mean, it’s mostly awful. It’s got a few, scattered moments of amusement, but given the wealth of talent arrayed in front and behind the camera, it’s remarkably lame.

It’s a musical loosely adapting A Christmas Carol, with Christine Baranski as Regina,  a small-town Scrooge who owns the title to the town she grew up in and plans to sell it to a mall developer. As with so much of this kind of faith-based family entertainment, audiences are expected to happily swallow the nog of sanctimony. It’s hard to stomach. 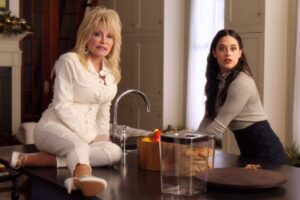 With all that Parton has accomplished in her life,  I was thinking she really should run for president. She’s the only candidate I can think of that every American, no matter their political stripe, is likely to love. It seems churlish to criticize her for her role here, so I won’t: Her presence as an angel — who first appears as a mysteriously well-dressed homeless person looking for “change” — brings a lightness to every scene she’s in. She wants to change Regina’s heart and mind, to remind her how to be happy, and she’s mentoring an angel-in-training, Regina’s personal assistant, Felicity (Jeanine Mason) — more than a little It’s A Wonderful Life going on, there. Fortunately, Mason can both sing and dance — her’s and Parton’s scenes together are the best. Baranski is typically professional, but the script doesn’t allow her to be nearly mean or funny enough. Her Diane Lockhart from The Good Fight would stomp all over Regina.

It turns out Regina’s got a lot of unresolved history in this town, including a former best friend (Jenifer Lewis) and former teen love (Treat Williams), a child given up for adoption in shame, and even the stanky spectre of Daddy Issues — but it only takes a couple of visits with Angel Dolly and a whiskey poured by a precocious tween bartender (Selah Kimbro Jones) to shake her conviction that this town shouldn’t be bulldozed, despite, frankly, plenty of evidence that this cheap-looking soundstage should. 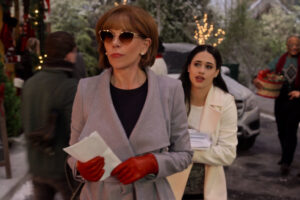 Every scene comes with a syrup-laden song — but not nearly enough dancing, given the choreography and direction from Golden Globe award-winner Allen — all in a cardboard, studio-set town without a single authentic exterior. There’s a song called “The Wicked Witch of The Middle,” without explaining what The Middle is. The Middle of America? The Middle Class? Or is this some kind of Wizard Of Oz reference? And we get a subplot so wholesome and sweet it’ll give you cavities with the town pastor and his wife deep into fertility treatments in the hope of a Christmas pregnancy.

Eventually there’s a family secret written in a bible, “so it must be true,” says Regina. Cue the Christmas Miracle, complete with an into-the-camera life lesson. 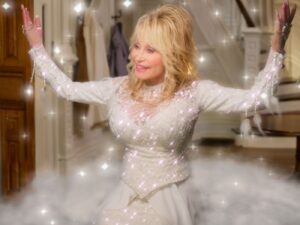 Christmas on the Square doesn’t even work as camp. For the love of Dolly, if you must, but you can’t say I didn’t warn you.