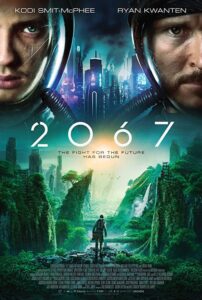 Just this week the theoretical idea of time travel got just a little more credence, but it’s always had potent allegorical power in the minds of fantasists.

The era I came of age in had plenty of these tales — from Terminator to Back To The Future — and that delicious question of whether you can change your fate through time travel has kept these stories humming. 2067 is a retro-futurist fable built on an especially convoluted time-travel scenario, and while the filmmakers’ clear affection for the sci-fi of the past is kind of adorable, their film is a mess — a painfully melodramatic drag about a terminal madboy with unresolved daddy issues, swaddled in an adventure chronically absent any fun.

The set-up has promise: In 47 years the world is dying from a lack of fresh air, Ethan Whyte (Kodi Smit-McPhee) is a blue-collar technician at a corporate monolith whose wife (Sana’a Shaik) has atmosphere sickness. The company has received a message from the future, asking for Ethan, by name, to come on up via their time-travel doohickey. The plan seems to be that if he goes, he’ll find an era that solved the oxygen problem — so the hope is he’ll find a way to send the earth-saving solution back to the future (er, 2067).

Basically, this is the same plot as Bill & Ted Face The Music, attempted with a straight face.

As the contradictions pile up, so too does a lot of back projection and cardboard set dec, but in a lovely, disco style. It’s as if director Larney — who comes from the world of visual effects — and his collaborators grew up loving the classic Star Trek episode “City On The Edge of Forever,” Blade Runner, Logan’s Run and Soylent Green, and just wanted to make a movie looking like those. There’s no faulting that authentic affection.

There is, however, plenty of criticism to be laid in almost every other department beyond production design. Smit-McPhee has a haunted countenance that guarantees one day he’ll be a terrific Ichabod Crane, and was solid in Slow West and fine in a couple of X-Men movies, but his Ethan is an emotional wreck from the jump — not the most compelling lead to hang this story on. He’s haunted by flashbacks to his absent father — that most tiresome of tropes — and falls apart accordingly. (Ethan as a child in flashback looks nothing like adult Ethan, adding to the confusion.)

About halfway in, the time-travel convolutions reveal his inevitable death (or does it?!), and from there on the weeping, gnashing, and moaning is interminable. You’ll end up hoping Ethan’s demise comes swiftly enough to put us all out of our misery.

Ryan Kwanten (of True Blood fame) is fine as his crusty pal, but amongst the many mysteries the plot (very) slowly unravels, his status as a trusted friend isn’t one of them — he’s clearly bad news. The rest of the cast struggle mightily with the awkward dialogue, maudlin tone, and shiny costumes to little avail. A gentle push is all it would’ve taken to put this into enjoyably camp territory, like a 21st Century Plan 9 From Outer Space. Even just a little self-awareness would’ve been a treat, to recognize that a script this outrageous should take itself just a little less seriously. 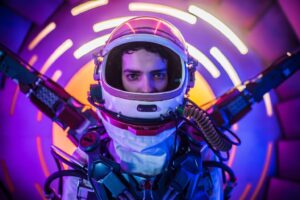 Ethan is eventually able to prove that there’s no fate but what you make, revealing one of the most egregious paradoxes ever unspooled in a time-travel tale — at least Robert A. Heinlein’s All You Zombies did it with tongues firmly planted in cheek, while another Aussie production adapting that story was smart enough to include relevant politics and far less irritating characters.

As 2067 spins out of control, the planet can’t catch fire soon enough.