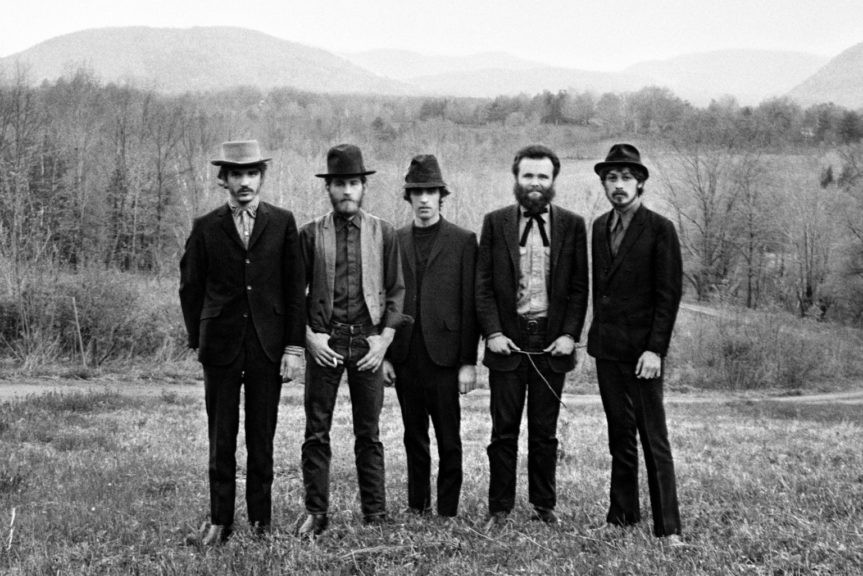 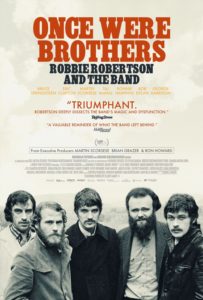 You know these guys.

This is the story of Robbie Robertson, Canadian songwriter and guitarist, and The Band, with which he’ll always be associated. It’s a lovely film, and includes fascinating interviews and a lot of terrific music. While it reminds us that the five men in The Band did something special together, it’s also largely based on the memories of just one of them. As the title implies, this is about Robbie Robertson first, and The Band, second — for better or worse. 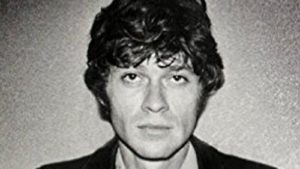 Robertson and American drummer/arranger Levon Helm met backing outrageous showman Ronnie Hawkins in Toronto in the late ’50s. This was before heading down to New York and meeting Bob Dylan through bluesman John Hammond. Dylan invited Robertson, Helm, and fellow bandmates Rick Danko, Richard Manuel, and Garth Hudson to back him as he went electric — which wasn’t welcomed by folk fans at the time. The international road testing forged a legendary touring act and a group of songwriters and arrangers, all coalescing at an ugly pink house in Woodstock, New York in the late 1960s. 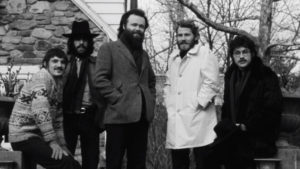 What came out of that house was American roots music — a bit of Muddy Waters and a bit of Hank Williams, a lot of Steinbeck and folk mythology. As someone remarks, it’s what we now call Americana.

Familiar faces step up to reminisce, including Ronnie Hawkins, Martin Scorcese, Bruce Springsteen, Van Morrison, and Eric Clapton. (No Dylan, and most disappointingly, no Hudson.) We also get some interesting stories of Robertson’s early days, his Six Nations reservation roots and the Jewish gangster father he never knew.

A lot of it is inspired by Robertson’s book, Testimony,  though it’s great to hear other voices chime in with their takes, collaborators and music business bigwigs like David Geffen and the very welcome presence of Robertson’s ex-wife, Dominique, who tells tales of excessive behaviour that led to more than one wrecked car. While The Band’s achievement is celebrated, the film is quick to point to alcoholism and addiction as the reason it all fell apart. 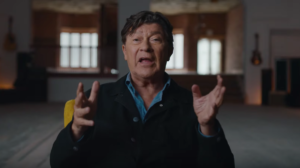 The doc more or less wraps up with The Last Waltz, which is where the other musicians parted company with Robertson, so that makes sense. At one point, Robbie claims after The Band called it a day he would’ve joined up with them and made music anytime, but The Band did reform without him, recording albums into the 1990s — I’m fond of their cover of Bruce Springsteen’s “Atlantic City,” with Helm on vocals .

It could be what kept him from the fold was the falling out between Robertson and Helm over songwriting credits. It’s touched upon, but not with any great depth, and while we hear from Helm in some archival interviews, that’s pretty much it. This is where Hudson is most missed. An objective take on the schism between the old friends — who once were as brothers — would’ve been a welcome one especially given that by many accounts Helm clung onto his grudge with Robertson to his grave.