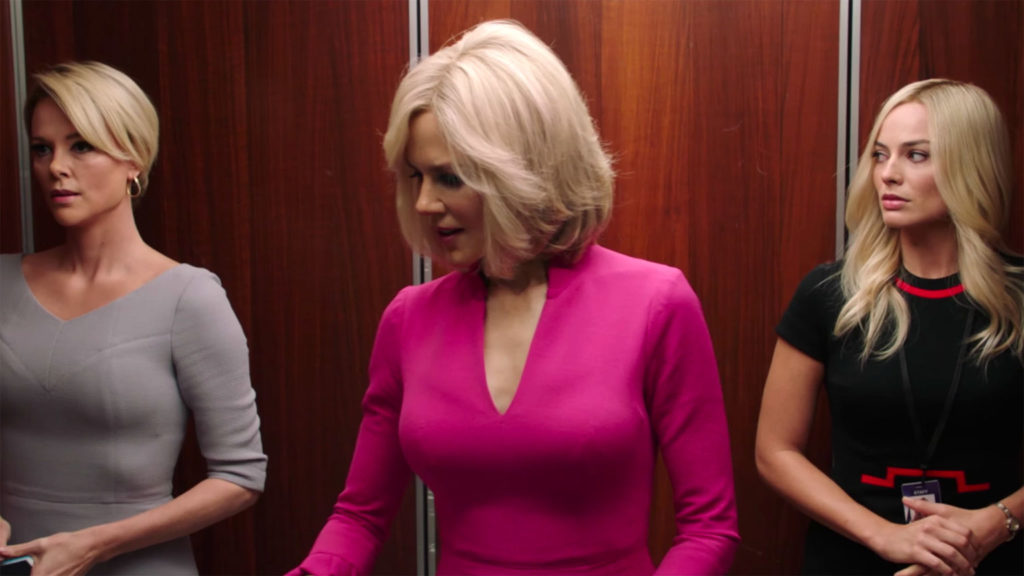 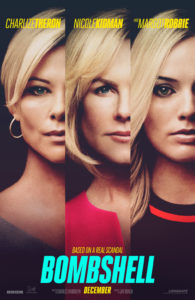 There’s a couple things this movie gets really right, that make it worth adding to your holiday cinema binge. One is rage. It does a good job channelling the righteous rage of women who were preyed upon by a powerful man.

Gretchen Carlson (Nicole Kidman, hampered somewhat by a fake latex chin) and Megyn Kelly (Charlize Theron, whose make-up is more convincing) were big names at Fox News, part of the network’s army of short-skirted, blonde commentators and hosts, integral to their mission of “fair and balanced” reporting on all things of interest to their massive, right-leaning American audience.  But the cost is clear: Roger Ailes (John Lithgow, in a bigger, jowlier fat suit than when he was Churchill in The Crown) mentors these women, and expects them to debase themselves for him. 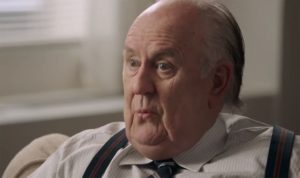 Roach and The Big Short screenwriter Randolph go to some trouble to put us right in the deeply fucked-up Fox office environment, the systemic sexism and bloody edge of competition keeping everyone on their toes. This is largely told through the eyes of a composite character, the God-fearing Kayla Pospisil (Margot Robbie), new to the network but eager to forward her career. She gets friendly with closeted lesbian, Jess (Kate McKinnon), who in justifying her own secrets helps explain the ethics of the workplace. But it’s when Carlson is fired, and then sues Ailes for sexual harassment, that the cracks start to show, and when Kelly, who has her own history with Ailes, has to decide if she’ll come forward. 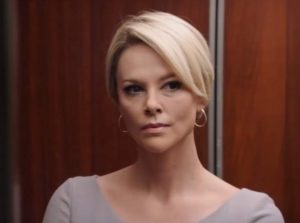 One deeply uncomfortable scene arrives about halfway in. It’s where Ailes harasses Pospisil in his office, and the camera lingers on her body, making the audience complicit in the harassment. Roach and Randolph have talked about how producer Theron urged them to keep the scene as is in the film, but I couldn’t quite reconcile the effort to replicate and indulge the male gaze. Roach also shoots the film with frequent push-ins, as if his picture is some low-budget sequel to The Office. That’s where we are at the end of 2019—mockumentary TV influences the look of feature filmmaking. 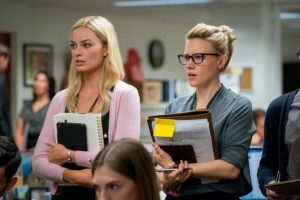 The performances are the second thing that genuinely lifts this picture. Kidman and Robbie are both solid, but it’s Theron who really crushes it, proving one more time why she’s among the best actors working. She does something in the modulation of her voice that I’ve never heard her do before, shortening the distance between her and the real-life person she’s playing.

Here’s the lede, somewhat buried: In order for us to genuinely sympathize with these women, we have to feel the injustice done to them—to its credit the film does that, with venom to spare. What it doesn’t bother to do is indict them for choosing in the first place to be part of the cultural monstrosity that is Fox News, and that’s hard to forgive.