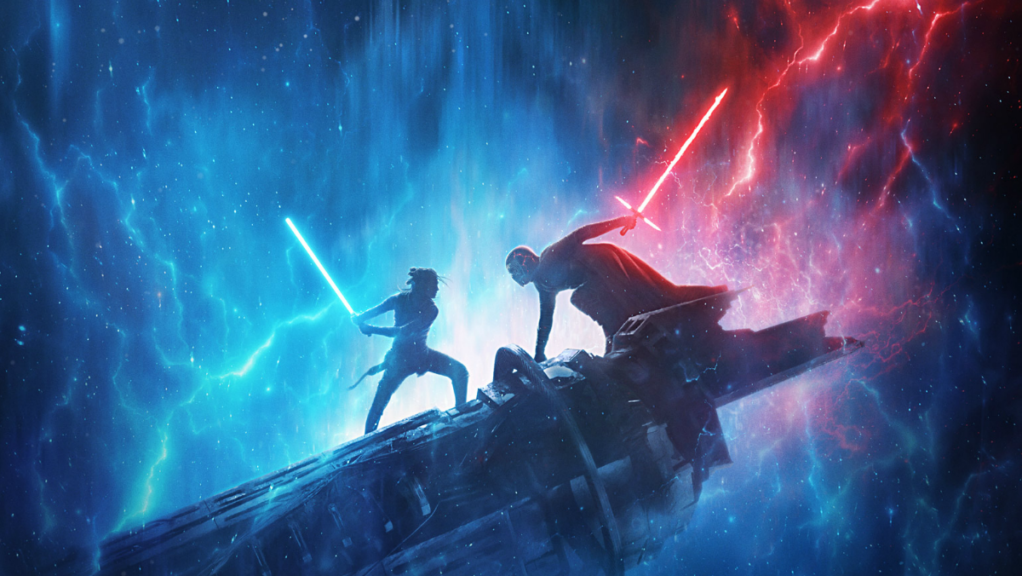 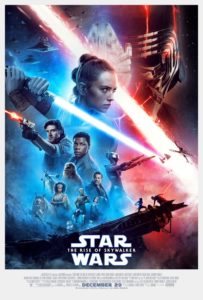 Overnight doesn’t feel like enough time to have the final film in this 42-year-saga settle in. It’s just too big, with too much going on. But that’s to the blockbuster’s credit.

Star Wars: The Rise of Skywalker wants to be a proper finale to a nine-part story, not just the past three films, and I appreciate its grand ambitions. While it’s clunky in places, and as jittery and regularly rushed as the past two entries, it settles down about mid-movie and finds its pacing, finds an emotional centre in the heat between Rey (Daisy Ridley) and Ben/Kylo Ren (Adam Driver). 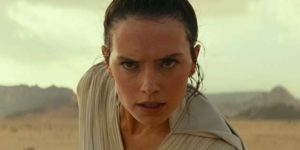 It ends up doubling down on the themes of redemption that are the basis of the series, while also being the gayest Star Wars movie yet—which, granted, isn’t saying much. It’s also the Bay-est, which I’ll explain. But I was moved, and that’s not what I expected. 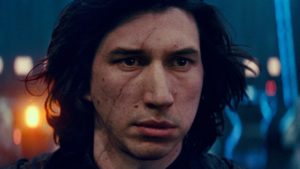 Especially not after an abysmal first act. We get Kylo Ren visiting a deep dark hole, the Sith homeworld, where original trilogy villain Emperor Palpatine (Ian McDiarmid) has been hanging about for years, extending his life with the sinister magics of the dark side of the Force. Naturally, he wants Kylo Ren to go kill Rey, as if he needs more motivation. But Ren wants her to join him, so they can rule the galaxy together. Sounds familiar. Rise mirrors The Return of the Jedi just as The Last Jedi mirrored The Empire Strikes Back, and The Force Awakens mirrored A New Hope. We didn’t need Palpatine to return to give this chapter more connectivity to the first trilogy, we just needed decent storytelling. Fortunately, it gets better later on. 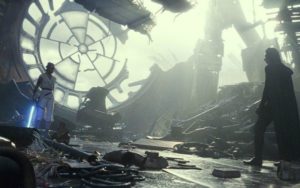 This first act of the film also seems inspired by Michael Bay, where every shot is maximized for the biggest impact, which leaves the movie feeling like cinematic fast food. The Millennium Falcon flies through tight spaces, once again, with Poe (Oscar Isaac), Finn (John Boyega), Chewbacca (Joonas Suotamo), and the droid BB-88 escaping from more First Order fighters. General Hux (Domhnall Gleeson) is once again on board a giant, wedge-shaped cruiser, now joined by the always welcome Richard E. Grant as the hissible General Pryde. Before long our young heroes are on a desert planet wandering around an alien cultural festival, and you’d be excused for wondering why or even caring. 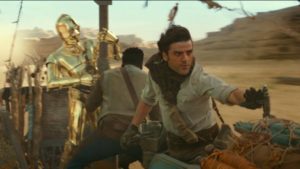 There’s a lot more of golden droid C3P0 (Anthony Daniels) this time out, which is good because he brings the laughs, something the last couple of films could’ve used more of. Leia says, “Never underestimate a droid,” which is a real change from the kind of classism that goes on with our metallic friends in this series. Star Wars works best when it’s just a little laid back, which the new Star Wars series The Mandalorian has figured out on Disney Plus. None of these Disney feature films have been able to replicate the light touch of the original movies, but of the three this one comes closest.

There are those who don’t agree — based on a few early reviews — but these last three films have improved as they’ve gone along, which is one way they’re like George Lucas’ prequels.  The Force Awakens was a reasonable reboot to this saga, good enough to make us care again about Star Wars and forget the crimes of those Anakin movies. I didn’t love The Last Jedi. It took risks narratively, shaking up the status quo, but it’s weighed down by major plot problems and a creeping feeling we’ll never care about these new characters as much as the original cast. 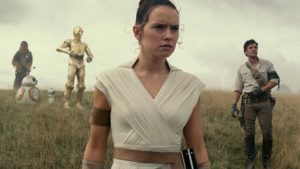 That’s where The Rise Of Skywalker finally works. With two movies in the can, we’re invested in Rey and Ben/Ren (and to a lesser extent, Poe and Finn), while the original cast in support is OK. Rose Tico ends up the Lando Calrissian of these films, which will upset some.

There’s more Carrie Fisher in this film than I would’ve expected. She died shortly after The Last Jedi was released, but the filmmakers take unused footage from the previous pictures and stitch it into this one, and unfortunately, that’s what it looks like. She doesn’t get the send-off she deserves, especially given a key mid-movie plot point that should’ve been a much bigger deal. To their credit, they avoid the digital double, the one element of Rogue One that didn’t work at all, but Fisher’s absence puts this movie in a corner it can’t get out of. 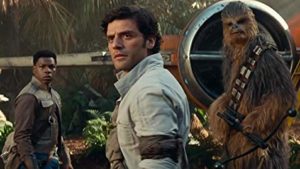 And there’s no getting away from the fact Abrams has gone in and course-corrected, erasing a few of the weird left turns Rian Johnson brought to The Last Jedi that made it feel less like a corporate product and more like the result of a single filmmaker’s vision. This change might please some of the more rabid and ridiculous in the franchise fanbase, but the mechanics of the plot — let’s rush to one planet and then another to get some map or meet someone who can help us do something else — is frequently awkward. When you watch the original trilogy, you always have a clear sense of the stakes, and with these movies you often don’t. 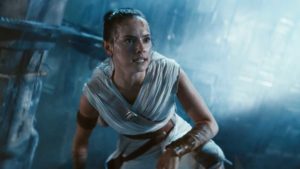 That said, by the time TROS has settled down, and our heroes have gotten away from that too-familiar location of a desert planet — clearly the same locale in Jordan where they shot The Martian  — and some clunky plot twists, the picture finds its groove.

A light sabre battle between Rey and Kylo Ren in and above raging seas is truly operatic, while the stealthy invasion of a First Order ship hits all the right notes to raise the material to where it feels authentically a Star Wars movie. Adam Driver especially delivers the emotional heft to make all this feel a little more real, and more surprisingly, brings a few unexpected laughs.

The gay content is only in the subtext — especially between Poe and Finn — though a mentor does remark that “some things are stronger than blood,” and we finally get a fleeting same-sex kiss in the film. It’s not much, but it’s more than we’ve had before in this franchise. Aside from Grant, promising new characters played by Keri Russell and Naomi Ackie get moments, just not enough of them.

If the final disposition of Rey’s origins feels a little too obviously calculated to be connective tissue with what went before — it would’ve been a better message if things had been left as they were in The Last Jedi, that she came from nothing and is still special. Despite all this, a lot of what we get here does work. The nostalgia mining is powerful stuff. 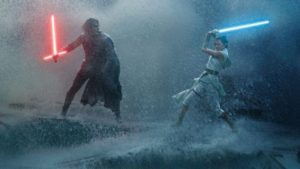 By the time we reach the finale, the movie provides drama that feels earned. It’s an emotional closure that, if a bit cod Shakespearean, gives fans an ending that satisfies.