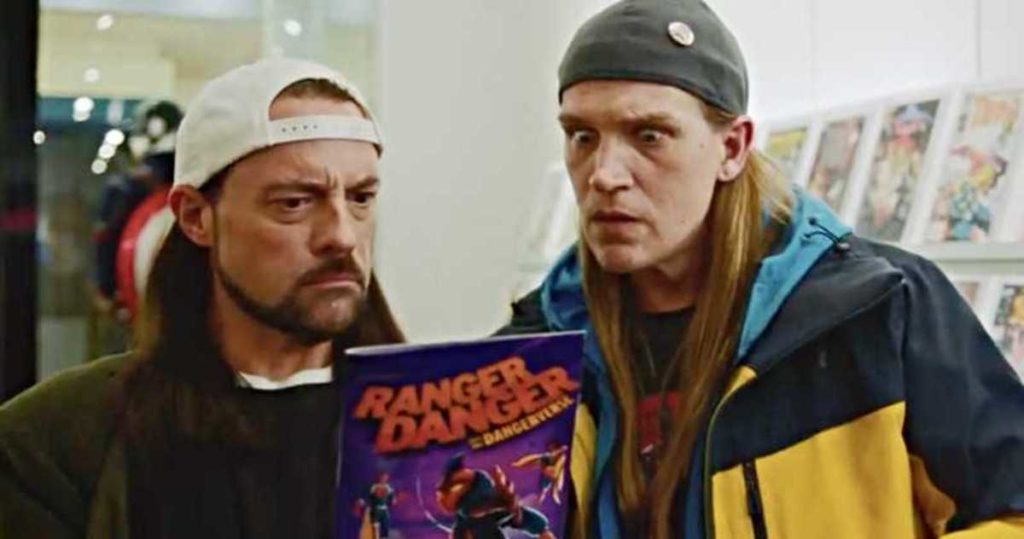 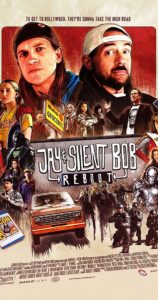 The peak of the View Askew-niverse was 20 years ago—let that sink in for a second. In the American indie revolution of the ’90s, New Jersey writer-director Kevin Smith was a peer of Quentin Tarantino and Richard Linklater. His movies were instrumental in making comic book culture mainstream with his View Askew production shingle, and actually tackled some serious dramatic issues—like the hypocrisy of Catholicism and how men judge “promiscuous” women—through his low-budget, foul-mouthed comedies.

In 1994 he made Clerks, famously completed by maxing out a few credit cards, about the dead-end days of retail lifers, and followed that up with much beloved ensemble comedies Mallrats, Chasing Amy, and Dogma. He provided early starring roles for his buddies Ben Affleck and Jason Lee, who’d both go on to big things, and even showed up as a regular supporting character in these movies, as Silent Bob, who usually says nothing at all, hanging with his dope-selling, motormouthed buddy, Jay (Jason Mewes). 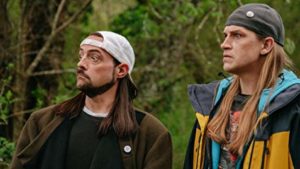 In 2001 Smith made Jay and Silent Bob Strike Back, finally elevating the stoner supporting pair to leads. The film was funny enough, but nowhere near as good as any of the four movies that preceded it. Hanging a whole picture on the low-brow goon show of Jay and Silent Bob kept the comedy from actually being about anything.

After that Smith put the View Askew movies to bed, and wandered into the cultural wasteland with  little-seen genre pictures, Red State and Tusk, and most recently, Yoga Hosers. In the past decade filmmaking has seemed like a sideline to his live appearances and his expansive, successful podcasting empire. The word is a recent cardiac event helped convince him to return to his View Askew world and revive Jay and Silent Bob, along with many familiar characters from his earlier, high-profile movies. 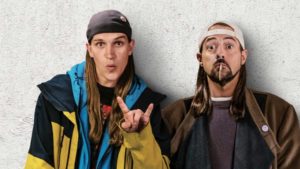 Evidently convinced that the self-referential humour is what people most missed about those pictures, he’s come up with a retread of Jay and Silent Bob Strike Back. The 2001 film was about how the Bluntman and Chronic comic superhero characters, loosely based on Jay and Silent Bob, were getting a Hollywood movie adaptation. Denied any residuals, the two buddies head to LA in order to sabotage the movie.

This new, lazy take has Jay and Silent Bob once again on the road to California when they hear the original movie (which they failed to stop getting made) is getting a reboot, this while also being an ostensible satire on Hollywood’s inability to come up with fresh material. Har-dee-har-har.

Smith was always a better writer than director (by his own admission), but both of those talents have failed him here. There’s no denying it’s fun to dip into his world again, but most of the gags are so half-hearted, and the production so rote, it’s hard to care about any of it. It’s mostly just an excuse to trot out cast from his earlier films, including Affleck, Lee, Rosario Dawson, Shannon Elizabeth, Joey Lauren Adams, and Matt Damon, have them say a few lines, then vanish. They all seem to be having more fun than the audience. 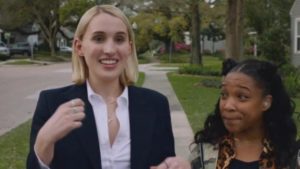 With actors this talented, the film draws a few, brief moments of genuine hilarity, but when Cannonball Run is referenced, you start to see Smith’s real inspiration. Smith’s Silent Bob used to be an actual character in these movies, but now he can barely restrain himself from doing what he does best, talking, so instead just mugs endlessly. There’s a sentimental thread running through the movie about fathers and daughters, but it’s not substantial enough to root the comedy in anything that feels like real life.

The one performer that ends up shining in the film Smith can take a lot of credit for: his daughter, Harley Quinn Smith. She stars as Millennium Falcon, a capable 18-year-old who tags along on the dudes’ cross-country journey. She delivers more emotional weight than the picture requires or deserves, but by doing so raises the level of everyone around her. I hope she finds more work, and maybe away from her father’s films, especially if they’re going to be this slapdash into the future.

Jay and Silent Bob Reboot screens for a second time in Halifax on Friday, October 18, but won’t get a full release here.