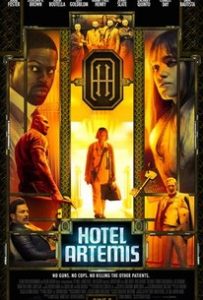 Writer-Producer Drew Pearce delivers a fairly original b-movie/sci-fi/crime drama for his debut as a feature filmmaker. It’s 2028, and Los Angeles is going up in flames due to a city-wide riot, but the Artemis is busy. It’s a clinic for criminals, where the patients are named after their room allocations. I said original, but this joint does owe some kind of debt to The Continental, the crime hotel in John Wick, and the Artemis has rules, just like that other place does. Otherwise, there are a bucketload of shifty, noirish characters—roles filled by a solid cast, including Sterling K. Brown, Brian Tyree Henry, Charlie Day, Sophia Boutella, Dave Bautista, Jenny Slate, Zachary Quinto, and Jeff Goldblum as Wolfking, the guy in charge of the LA criminal underworld. Jodie Foster is The Nurse, the lady who runs the joint. 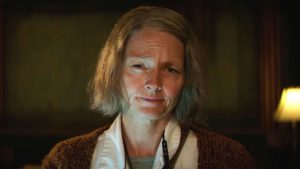 Yes, it’s an odd part for her to play, but in a character role like this she’s never less than eminently watchable. For a feature shot almost entirely in studio, Hotel Artemis has a credible, creative production design, and things to recommend it to genre fans. Where it doesn’t quite sing is that it’s not perverse or weird enough to qualify for a midnight-movie cult, nor nearly as much fun as it should be—it bogs down badly in the second act. Still, worth a look, especially for a late-arriving fight scene where Boutella makes a bunch of thugs wish they’d never been born. 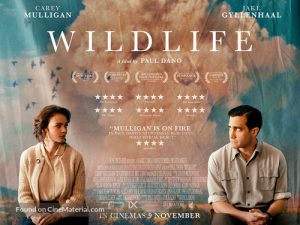 This is actor Paul Dano’s first film as a director, co-written by his romantic and creative partner, actor Zoe Kazan, adapting a book by Richard Ford. It’s a quiet, but deeply felt drama about a family who  moves to Montana in the early 1960s. When the father, Jerry (Jake Gyllenhaal), is laid off his job at a golf course, and is too prideful to take work he feels is beneath him, his wife, Jeanette (Carey Mulligan), must step up and find work. The story is largely told through the eyes of the 14-year-old son, Joe (Ed Oxenbould, who, while giving a fine performance, distractingly doesn’t look at all like either of his screen parents). Wildlife is lovely to see, a collection of wide-screen exteriors and claustrophobic, austere rooms, with the weight of silence and solitude in characters’ eyes. When Jerry chooses to go off to fight forest fires, Jeanette feels abandoned. Mother and son must fend for themselves, and Jeanette—who up to that point seems a reasonable, if brittle, character—starts to come apart at the seams, showing classic signs of mood disorder.

“Oh, Canada,” she says, when a French-speaking voice comes on the car radio. “We live near Canada, my god. I can’t stand Canada tonight.” It’s a dash of mordant humour in a tale that feels, moment to moment, like it’s careening toward tragedy, and though I sometimes stumble over the character of the precocious child who seems more emotionally together than the adults in the room, this is a careen worth taking, and that’s largely due to Carey Mulligan. It’s an electric, award-worthy performance, and if a chill creeps across the screen when she’s not on it, the film is still hers. 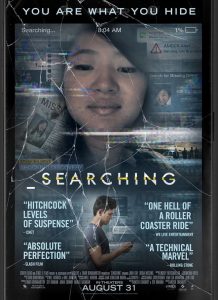 This isn’t the first thriller to take place entirely on a computer: The Den and Unfriended were two earlier, more horror-bound attempts to engage us through the limited possibilities of a story told through a computer screen. In this case it’s about a San Jose father and widower David Kim (John Cho), who freaks out when his teenage daughter, Margot (Michelle La), takes off one night and doesn’t come home. The mystery of Margot’s disappearance is the main plot driver, and it’s a fascinating one, a puzzle that David pieces together with evidence we get to see on the screen, and the sharp-eyed amongst you might spot clues before he does. David finds his daughter had secrets she wasn’t comfortable sharing with her father—and in some cases, who can blame her—but with the help of a detective (Debra Messing), David starts to notice patterns and clues to his daughter’s whereabouts. 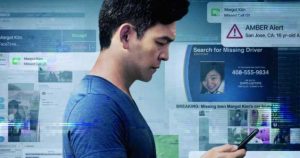 There’s a lot of ingenuity on display here as we join David’s hunt for information. The way filmmaker Aneesh Changanty generates suspense in the opening and closing of windows on the screen is impressive, but he’s unable to keep all the action plausible through video sites, chat pages, and social media. He strains credulity with Facetime windows staying open long after one party has signed off—and who in David’s generation uses Facetime that often? And then, later on, we’re watching live broadcasts from the local news helicopter cameras and confessions thanks to surveillance footage. It strays into the arena of found-footage, the most played-out genre in modern cinema, which is a mark against it.

That said, Searching is full of storytelling ideas we haven’t seen a million times before, and it nails a thematic thread tying together an anxiety around how our secrets live online, and the palpable fear of parents for their children lost in this new digital world.