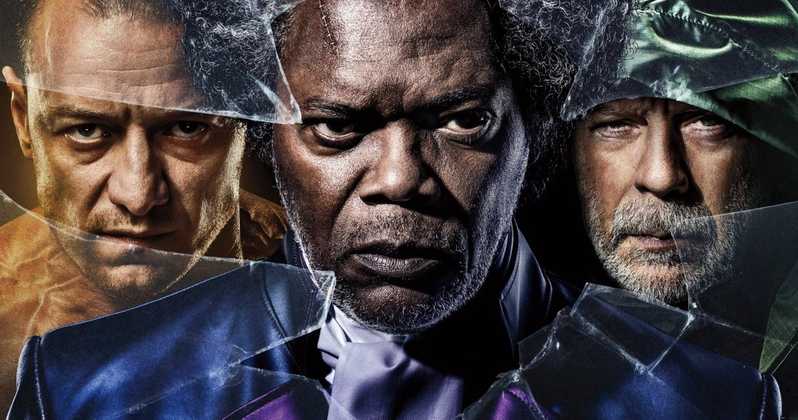 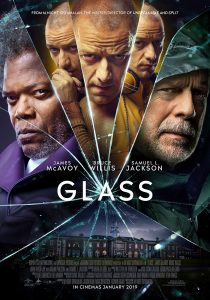 This is a deeply unlikely picture, stitching together the filmmaker’s Unbreakable (2000) and Split (2017) in an amalgam that goes off in directions that stretch credulity, while still delivering enough of Shyamalan’s ambition and gift for fantasy cinema storytelling to make it worthwhile.

At the end of Split, Kevin Wendell Crumb, the character with Dissociative Identity Disorder played by James McAvoy, escaped. His multiple personalities made plans to become something new, something bigger—Shyamalan borrowing heavily from Thomas Harris’ Red Dragon—channeling the most violent personality in the bunch, The Beast. (Let’s not forget Shyamalan is lamely using mental illness to creep us out.)

We pick up here months later where Kevin has attacked and abducted four cheerleaders and stashed them away in an abandoned factory in Philadelphia. On his trail is David Dunn (Bruce Willis), the now-middle-aged urban avenger who runs a home security equipment store with his now-grown son, Joseph (Spencer Treat Clark), who also operates as David’s Alfred, his back-up man. David and Kevin end up captured in a psychiatric facility, along with David’s old nemesis, Elijah “Mr Glass” Price (Samuel L. Jackson), under the care of Dr Staple (Sarah Paulson), who’s researching cases of people who believe they have super powers. How she’s given the authority to lock these guys up is a little unclear. Naturally, Elijah has a plan for using Kevin and David to get out of the institution. 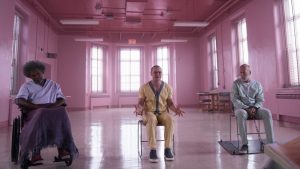 I’ve seen the Rotten Tomatoes score on this one, and it’s not good. Shyamalan is not beloved of critics, and there are plenty of things foggy with Glass, mostly to do with shortcuts Shyamalan is taking with his plot—the holes you could fall into, and red herrings that promise satisfaction but don’t deliver. Worse, his narrative signature, the third act twist, comes with multiple iterations, and at least a couple of them feel half-baked. Casey, (Anya Taylor-Joy) the clever teen from Split, also returns, but her subplot relies on us buying her affection for the troubled man/serial killer who abducted her in the previous film and murdered two of her classmates. That’s a reach. But only real conspiracy theorists will buy the biggest third-act reveal, because Shyamalan doesn’t do nearly enough early in the picture to seed its possibility. 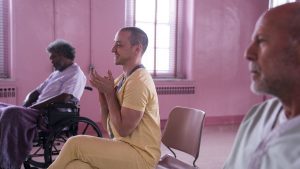 Unbreakable was way more nuanced and an overall superior film to the queasily exploitative Split, but the emotional weight of the earlier film just isn’t carried over. Partly it’s the absence of David Dunn’s connection with his wife, who has been written out, and partly it’s that we don’t get enough time spent with David and Joseph. A sequel with only them and Elijah might’ve been preferable to this effort, which tangles itself in knots to knit the narratives of two movies. 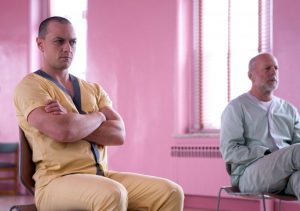 But, once again, Shyamalan delivers gorgeous-looking cinema, the camera moving in lovely syncopation with the action. He’s a master of light and colour schemes to the point where it’s a simple pleasure to see where he puts his camera and how he lights the room. He’s constructed a strange universe here, exploring themes of belief in something bigger than we are, the things humanity can do if given the right set of circumstances. We all want to believe these characters have powers, abilities, and he nicely plays on that wish. And Elijah operates as a kind of Greek Chorus, reminding us of the superhero trope elements  in a satisfyingly meta way, goosing the audience as we go along. It’s inherently pulpy cultural material that Shyamalan refuses to look at as disposable, which is one of the major strengths of all three of these films—they indulge in and provide a mirror to what’s going on with these power fantasies now so prevalent in cinema. It’s too bad the director is so casual about those problematic plot solutions.

So, while it’s impossible to ignore the cracks, the confidence with which Glass is told, and Shyamalan’s commitment to his themes, makes it a win—if just barely.