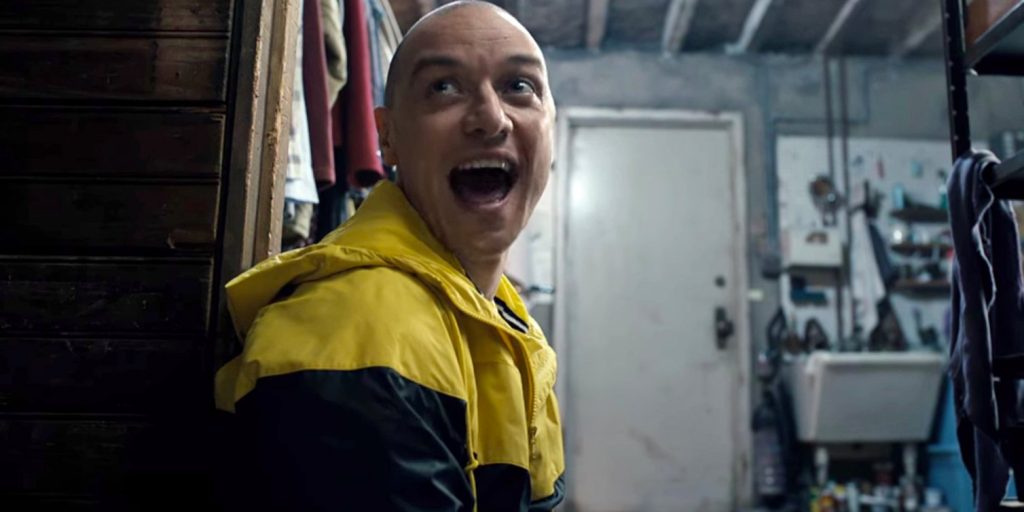 With the sequel Glass opening on Friday, January 18, I thought it worthwhile to rewatch its predecessors. My review of Split is a light rewriting of the original from February, 2017. 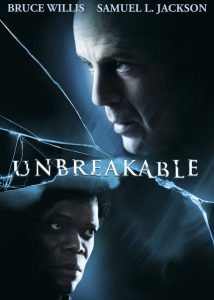 Shyamalan is one of the few directors working who has a brand, but one who’s seen that brand dragged through the mud. For awhile now, the name M. Night Shyamalan has been shorthand for schlocky genre pictures, his go-to favourite storytelling crutch—a third act twist a la The Twilight Zone, changing much that went before it—no defence against terrible reviews. That said, the filmmaker has persevered, continuing to get hired to make feature films in face of this scorn. The legacy of The Sixth Sense, released in 1999, still carries enough weight to turn production lights green, and presumably he keeps his costs low.

Watching his fourth feature, Unbreakable, again, 19 years later, some of the dialogue, especially in the early going, is clunky. But the film casts a spell, and it still feels like a major work. Back when it was released in 2000, I went to a party and met someone who absolutely hated the film, who was practically offended by it. The main premise just seemed faulty to him. As a lifelong fan of comics, I couldn’t understand his problem with it. This tale demands you make a jump, but if magic realism isn’t your thing, steer clear. 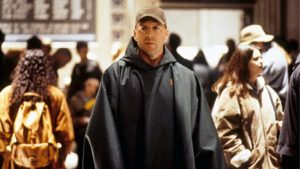 Philadelphia security guard David Dunn (Bruce Willis) is the sole survivor of a horrendous train crash. Comic book aficionado and local eccentric, Elijah Price (Samuel L. Jackson), was born with a debilitating disease, rendering his bones brittle. He’s convinced that Dunn is his opposite, someone who is “unbreakable,” someone with special gifts. He believes Dunn’s gifts mean he was put on earth as a righter of wrongs. Dunn is skeptical in his lack of self-esteem—he’s unhappy in his work, and in his marriage to Audrey (Robin Wright), and distant from his young son, Joseph (Spencer Treat Clark). 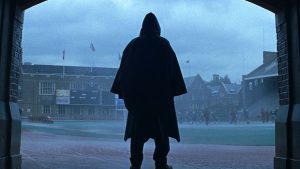 M. Night Shyamalan is nothing if not serious about his material: this is slow-moving, solemn cinema. The heart of it is the relationship between David and Audrey, how their connection is fragmented, on the edge of falling apart. They gradually find a way to mend, to start again. The scenes from their marriage feel like an undercurrent of realism that help manage the parts of the film that stray into fantasy. There’s unease between these elements that would capsize a director less sure of his vision, but full marks to Shyamalan and his collaborators for their management of tone, for the balance they achieve in mixing genres. That amazing final scene between David and Joseph shows Clark’s impressive gifts as a performer, but it also finally connects father and son, man and boy. I think that’s also important because comics find many of us when we’re children.

Also, Shyamalan and DP Eduardo Serra’s distinct camera movements lead the eye through a gentle pattern of repeated symmetry, through warm and cool colours, and achieves more than a little visual poetry.

What’s interesting watching this picture in 2019 is that the backdrop of superhero myth is now so much more mainstream, thanks to the ongoing popularity of the superhero movie genre. It makes the almost scholarly approach here feel a little prophetic. 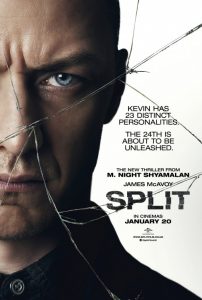 Split opened big back in 2017, and gave M. Night Shyamalan his biggest hit in years. If it’s not to the standard of his Sixth Sense or Unbreakable, it’s a genuine step in the right direction from a string of films unloved by critics and audiences. 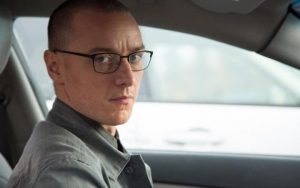 James McAvoy is Barry. And Hedwig. And Dennis. And 20 more personalities. He’s a guy with Dissociative Identity Disorder, who when we meet him he abducts three teenagers from a restaurant parking lot. They’re two popular girls, Claire (Haley Lu Richardson) and Marcia (Jessica Sula), and one emo misfit, Casey (Anya Taylor-Joy), who periodically (and pointlessly) flashes back to her childhood spent hunting with her father and uncle. Now the three girls are in some industrial basement while we all struggle to figure out what Barry, Hedwig, Dennis, and the others have planned (Spoiler alert: It ain’t good.) and Casey does her best to play one personality off the others.

Meanwhile, one of the many has been emailing their therapist, Dr Fletcher (Eight Is Enough‘s Betty Buckley), to make appointments that Barry (or is it Dennis?) has been regularly showing up for while downplaying their urgency. 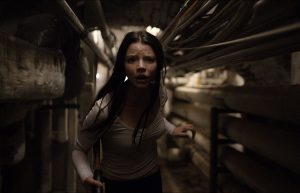 All of this is less suspenseful and involving than Shyamalan thinks it is, even replete with stylish stairwell shots—we get it, you love Hitchcock—but what he does manage is to assemble his story elements and direct his actors to a point where the third act payoff delivers—in a straight ahead b-movie exploitation sort of way. It helps that McAvoy is going full theatre games with the voices, accents, and posture, though its Taylor-Joy who holds the attention. I liked her in The Witch, Morgan, and Thoroughbreds, and she really shines here. She carries the picture on its various detours. 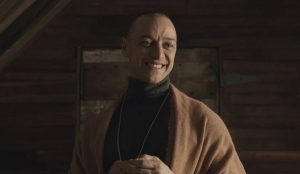 And no, there isn’t a twist this time, not really. Not unless you count the very late revelation that Split is, in fact, a loose sequel to Unbreakable, part of the MNSCU—the M. Night Shyamalan Cinematic Universe. I’m OK with it, but I appreciate that Shyamalan, whatever he has planned for these characters in Glass, doesn’t feel he needs to use the same storytelling tropes he has before. There’s enough meat here to keep the suspense humming.

One last thing: D.I.D. is a real psychological condition, and the fact Shyamalan has used it in this context—manifesting in a dangerous individual with added supernatural shades—is nothing to be applauded. Sure, plenty of filmmakers have demonized some esoteric psychological malady in their tale of suspense and murder, including Hitchcock in Psycho, but that doesn’t make it OK.