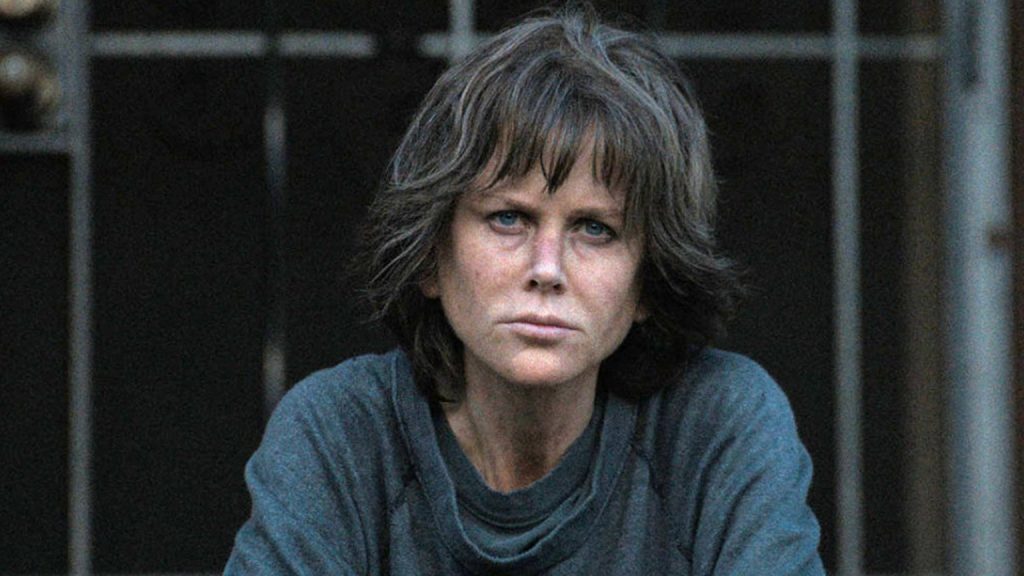 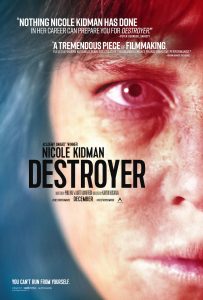 Karyn Kusama hangs her movie on Nicole Kidman’s thousand-yard stare. Kidman is Detective Erin Bell, with some particularly horrendous prosthetics and make-up around those eyes. If we’re supposed to assume she’s an addict, the film is coy about it. She does have the occasional tendency to sleep in her car.

During the day she’s a cop haunted by an undercover assignment from years past where she was embedded in a crime gang (with Sebastian Stan), back when she was less artificially cadaverous. She’s also the mother to a 16-year-old (Jade Pettyjohn) who’s acting out because, well, lots of reasons, but given her obsessive, damaged mother, you can understand, while her father (Scoot McNairy) is ineffectual. Meanwhile, the mastermind of the gang, Silas (Toby Kebbell), might be back on the scene (with help from Tatiana Maslany), and Bell is on the ragged edge, determined to fix a mistake she made 17 years before, no matter what. 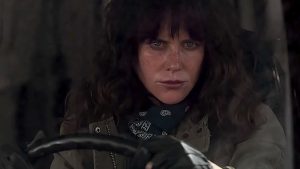 There are moments, scattered through the film, where Kidman’s chops shine, her damaged detective showing the gravel in her soul. And the action sequences work remarkably well—including a scene with a cameoing Bradley Whitford, and a mid-movie heist-turned-chase-gone-wrong. Destroyer also includes a satisfying twist in the end, which I won’t reveal, but the dual narratives—the investigative present and the undercover past—coalesce nicely.

Kusama has made a fairly impressive, if uneven, collection of features through her career; Girlfight, Aeon Flux, Jennifer’s Body, The Invitation, and now this, with some TV credits in between. Her passion for genre is to her credit, but this LA noir has the tone and articulation of thrillers that have lately,  and more successfully, migrated to TV—the True Detectives and The Killings of the world. When Destroyer works best it’s as a grim character study, a guilt-ridden protagonist meting out violent retribution and aiming for some measure of peace, if not redemption. But when the movie doesn’t work, it reveals its b-movie, straight-to-video carapace, and Julie Kirkwood’s cinematography doesn’t bring enough visual flare to lift it past that.

In the end, it comes back to the casting. Kidman, despite all her talent, seems an ill fit for this part. Those eyes and face—bad make-up included—is a mask we don’t entirely see behind.