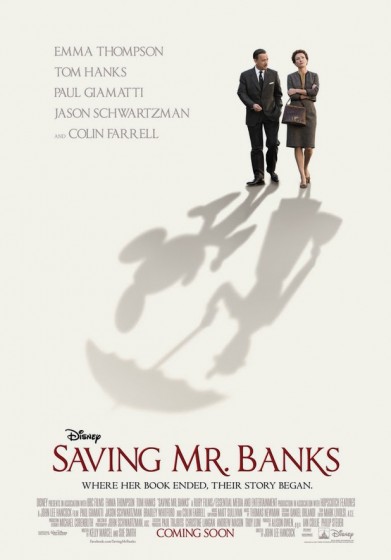 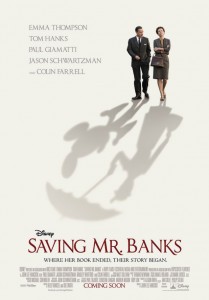 For me a little skepticism is baked in. It makes me recognize that there’s something massively self-serving about a Disney movie that celebrates ol’ Walt—the guy whose company is a global hegemony of children’s entertainment—whose love for Mary Poppins convinced the character’s creator, PL Travers, to sign over her beloved fictional governess so that the movie might be made, and in the meantime helped her to let go of a lingering sadness borne out of childhood trauma. And also don’t forget, Hancock is the guy who directed The Blind Side, another seriously problematic film that traded in manipulative Hollywood hokum to pull heartstrings.

But speaking of respect, I also have some for a filmmaker who can make me feel something, even as I recognize the blatant sentiment and manipulation. And if that’s your family-friendly speed, you’ll find things to enjoy here.

Travers is essayed by Emma Thompson, who I’ll watch in anything. She’s a real reason to see this, wonderfully persnickety and protective of her creation. The film gets lots of mileage on her proper British reserve mashing up against sunny, California style, especially with her driver, Ralph (the always reliable Paul Giamatti).

The reason she’s there: she needs the money to continue living in her London home, so agrees to go out to Los Angeles for two weeks to work on a script for the prospective Poppins picture, which Disney had wanted to make for 20 years. (It was a promise he made to his daughters, apparently.) Travers’ fights with Disney creative (nicely represented by Bradley Whitford, BJ Novak and Jason Schwartzman) over animation, music and the proper use of language (supercalifragilisticexpialidocious is a non-starter) are the best parts of the picture. Tom Hanks as Disney is smooth and believable, without being entirely likable. It’s a smart way to play him.

There are moments when Saving Mr. Banks reminded me of Finding Neverland, in how it reveals the background to a beloved children’s tale. Except that a good half of the running time here is spent in the early century Australian outback. It’s where Travers grew up, encouraged by her father (a consistently solid Colin Farrell) to pursue flights of fancy. Dad was a banker who couldn’t hold down a job due to his alcoholism. These golden-hued childhood memories start well, but bog the story down as we go along. More fun would have been Travers’ adventures in Hollywood, tentatively stepping out into the Beverly Hills Hotel bar to have some tea, which she does in a single scene that only serves to show she’s lonely. There could have been a delightful sidebar, a fish-out-of-water story, here if they’d chosen to pursue it.

Beyond this, I’m sure you can guess what happens, since we all have Dick Van Dyke’s appalling cockney chimney sweep stuck in our collective unconscious. It’s just the question of how it comes together. More about that I won’t say, but that Hanks and Thompson are Academy Award-winning professionals and jerk the tears accordingly.

I’m just going to reiterate (from my skeptical base), the Disneyfication of this story and its function as a public relations exercise is nauseating. But I also can’t deny it’s reasonably well made and very well acted.