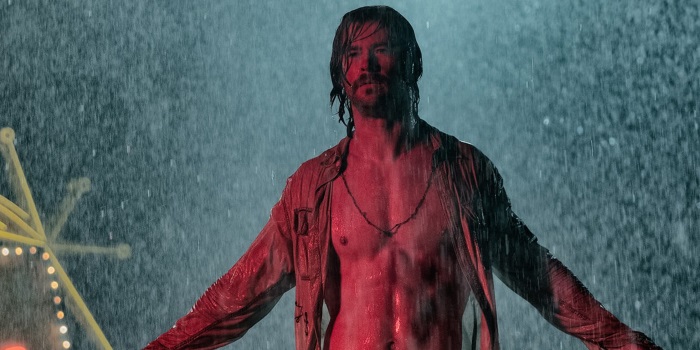 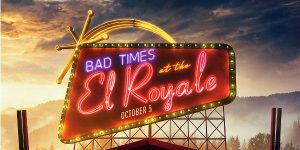 Goddard has a terrific rap sheet for a creator of quality content: his fingerprints on good things go back to Buffy the Vampire Slayer, Cloverfield, Lost, Cabin In The Woods, The Martian, and World War Z. (I interviewed him for The Coast back in April, 2012.)

Anything with his name attached should provoke interest, especially a crime drama he wrote, directed and produced. The advance word was that it’s “Tarantino-esque.”  That makes sense: in spirit it’s not a far cry from The Hateful Eight. It certainly has the sudden, shocking violence, the gore, the wall-to-wall music, and the stellar cast, all circling each other in a mostly single-location shoot. What it doesn’t have is QT’s joyful depravity, his brilliance with dialogue, or any of the humour. You can check into the El Royale anytime you want, but you’ll also want to leave pretty damn quick. 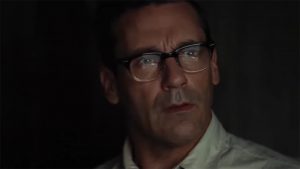 This is a very deliberate story, one that isn’t able to sustain the interest or suspense through the running time. The grindingly slow opening 20 minutes should’ve stopped most agents from sharing the script with their clients, but Goddard’s film does engage largely in the second act, then tails off in the end. 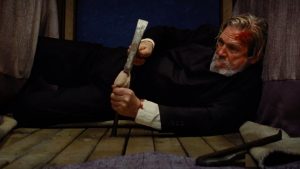 We’re stationed somewhere around 1970. An odd group have congregated at the El Royale motel, famed for being half in Nevada and half in California: The Priest, Flynn (Jeff Bridges), The Singer, Darlene (Cynthia Erivo), The Salesman/FBI Agent, Laramie (Jon Hamm), and The Badass, Emily (Dakota Johnson). They’ve all got secrets, which are revealed as it turns out the motel has a secret passage around back where the management (here represented by Lewis Pullman) can snoop on the goings ons. Why this hotel is run this way, and who is responsible, is never explained. That’s a movie I’d like to see.

It isn’t long before Emily’s little sister, Rose (Cailee Spaeny), appears, and with her The Hippie Cult Leader, Billy Lee (Chris Hemsworth). He’s open-shirted in every scene in case you were wondering, but Hemsworth just isn’t dangerous, and fear is what is required. 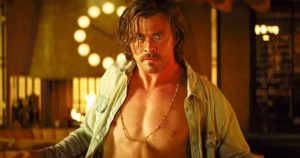 Bad Times at the El Royale threatens to catch fire repeatedly, and fizzles every single time. The jagged, doubled-back timelines help, as does the quality of most of the performances, but Goddard is really more interested in the circuitous nature of the plot than plausible character motivations. He slathers on some business about faith and redemption and maybe a touch of social relevance, but it doesn’t amount to much.

The film never feels anything more than a genre exercise. That can work with some real enthusiasm in the direction, but what finally kills the movie dead is the appalling running time—scenes wander on forever, paced to fit that length, and you feel every butt-numbing minute of it.