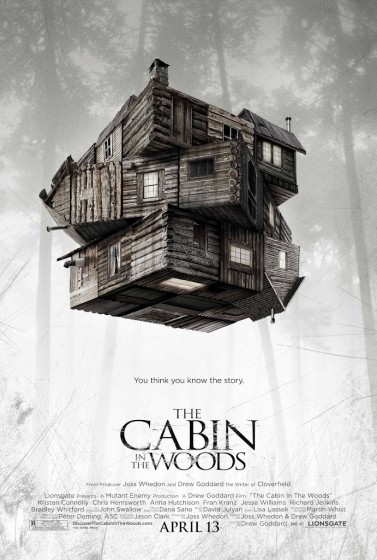 From the outset, The Cabin in the Woods hints that it is not a typical horror film. The opening scenes introduce two mid-level bureaucratic types (played fantastically by Richard Jenkins and Bradley Whitford) having a run of the mill water cooler discussion. It becomes increasingly evident that these two paper pushers and their secret-looking government type jobs will play a role somehow, but it’s not entirely clear what they’re doing or how it relates. Cut to a scene involving a group of archetypal “co-ed” characters gearing up for a weekend of summer fun in typical “scary flick” fashion and one really starts to wonder about how it all fits together. What follows is a deliciously self-aware horror film that has the stamp of co-writers Whedon and Goddard all over it.

Part of the fun is not knowing too much about it going in, but what I will say is that those expecting to be truly, deeply, feel-it-in-the-bones scared will not find that in this film because that’s not what it’s about. This is a scary movie about scary movies. While Wes Craven’s Scream may arguably take the ultimate title in this sub-genre, The Cabin in the Woods goes about it a bit differently. It delivers laughs followed by screams literally side by side and changes tack three or four times in ways that get increasingly more insane. The final act especially is one that deserves more than one viewing to fully appreciate.

One of the things that makes B-grade horror films so enjoyable is that plot generally plods on in a familiar fashion and the real treat is finding out the weird and wonderful ways that the various characters get killed off. Whedon’s signature banter coupled with some truly visually outstanding scenes from Goddard turn that trope on its head in a unique way that’s not only exciting to watch, but also raises some interesting questions about morality, mortality, and free will in among all the blood and gore. What results is not the scary movie you thought you were getting, but the scary movie you want to watch again.