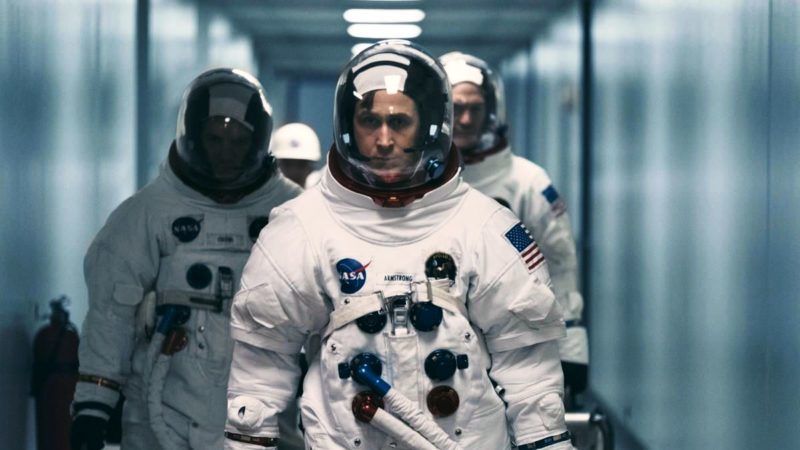 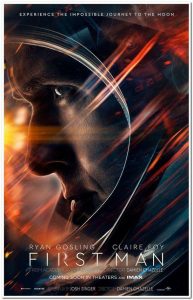 What First Man does well it does masterfully: the nuts and bolts and rivets and metal groans of analogue space flight. First Man brings an impressive level of realism to this recreation, with the sound design and herky-jerky visuals convincingly making the trip to the moon—and other test flights in advance of July, 1969—something you can experience in your theatre seat. The moon landing is especially vivid in tandem with Justin Hurwitz’s score, one of most verisimilitudinous visits to the lunar surface on film since Kubrick did it 50 years ago, a year before the actual event.

I wish the rest of the production was as gripping. The acclaimed director of Whiplash and La La Land convinces here in the technical details when up in the air, but his handling of the narrative drama is disappointingly pedestrian down on the ground. 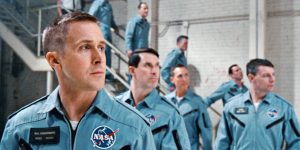 Yes, it does retell the story of The Right Stuff, how NASA trained a group of pilots for years to be tough-as-nails astronauts, but with Neil Armstrong (Ryan Gosling) front and centre, and through the prism of his relationship with his wife, Janet (Claire Foy), and children. The film suggests that Armstrong’s taciturn drive in his work was somehow the result of grief—the death of his two-year-old daughter from brain cancer.

It’s the story of Armstrong’s inability to communicate his pain, that strong, silent style of masculinity, and how he self-medicates with his highly dangerous career. It may be accurate, but it makes you wonder what point Chazelle is making. Is it that Armstrong was a man of a certain generation whose mismanagement of grief allowed him to reach unparalleled professional achievement while he deferred familial responsibility? At times it feels like an apologia, even a celebration, of this archetypal American male. Don’t believe the flag controversy, there are plenty of stars and stripes in this movie.

I’m not sure I buy much political objectivity, especially as Chazelle includes the civil rights voices opposing the money spent on the space program while these American heroes die in unpleasant ways in the name of the dream. He does allow Janet a moment or two to bring her voice to bear, and Foy is outstanding, but it’s a repeatedly thankless role, the frustrated wife to a “great man.” A new telling of a story that’s been told before can work, but not much in this script feels like it was written in the 21st Century. 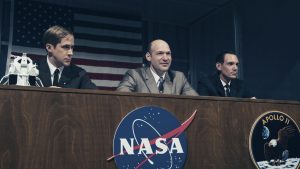 With Armstrong, Gosling is threatening to calcify: His credentials are unassailable, and I thought he was terrific in last year’s Blade Runner 2049, but this is just another of his stolid, brooding men in a professional quiver full of them. There’s some pleasure to be had in the wholesome, character-heavy assemblage around him, including Corey Stoll as astro-asshole Buzz Aldrin, Jason Clarke as Ed White, with Kyle Chandler, Patrick Fugit, Christopher Abbott, Ciaran Hinds, Shea Whigham, and Lukas Haas as other notably close-cropped dudes. 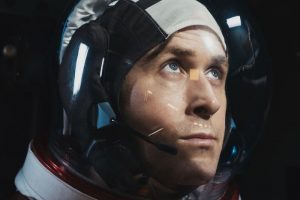 Chazelle has a ball with the grainy, ’60s home movie look of the thing. The sense of the era is remarkable, again going to the filmmaker’s confidence with how this all should appear on screen. But this picture is polishing a male myth that doesn’t require the burnish.