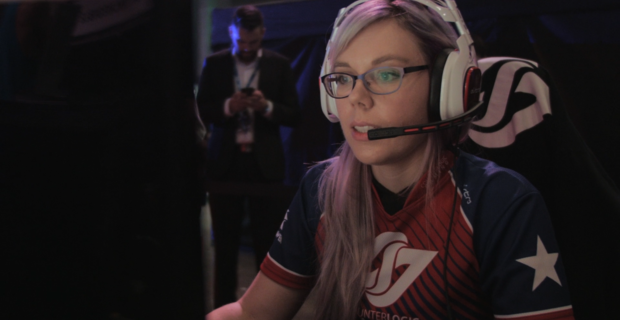 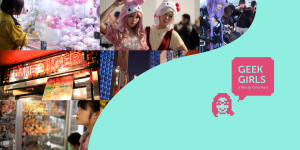 Here’s a message to documentary filmmakers: Your project may not be entirely feasible if you make yourself the centre of it and not once, but twice, you show footage of yourself calling possible interviewees, while your voice-over says something like, “Many experts and celebrities I’d hoped to speak to bailed out at the last minute.”

That said, full credit to Canadian writer-director Gina Hara for making her lack of big-name interviews a part of the narrative—in geek culture right now, whether cosplay, gaming, or comic books, if you’re a woman you’re going to get a lot more grief from internet trolls than the guys do, to a point where nonsense can turn misogynist, ugly, and even life-threatening. Hence her key interviews dropping out.

One of the first solid points Hara’s doc makes is the irony of a marginalized group—those self-conscious dudes into comics, video games, or fantasy—treating women interested in the same with a version of the rejection they might have themselves received. The interviews Hara does get are solid: experienced cosplayers, a working comic book creator, a competitive gamer, the founder of the site Black Girl Nerds, and a pair of Japanese women who consider themselves otaku, manga obsessives, but are so embarrassed about it they only agree to go on camera with pseudonyms. Their discomfort for being so into fantasy is palpable, but then they struggle to understand when Gamergate is explained—it’s interesting to see how different cultures are metabolizing the mainstreaming of geek interest, and shame is sadly still a common thread.

Hara’s documentary isn’t going to blow the lid off these issues of gender inequity among nerdy obsessives, but it does further the conversation, making it entirely worthwhile. 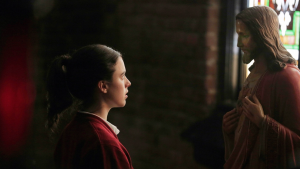 First time feature filmmaker Margaret Betts sets her story in a Kentucky convent in 1964. Sister Cathleen (the luminous Margaret Qualley, who happens to be Andie MacDowell’s daughter), wasn’t raised Catholic—her mother (Julianne Nicholson) was actively agnostic—but Cathleen took to the idea of giving herself to God while attending Catholic school. The film’s first half is a little prescriptive—how good it feels to embrace faith!—as we see Cathleen and her fellow novice nuns go through the process of making sure they’ve got the right stuff, under the watchful eye of Sister Mary Grace (Dianna Agron) and the abuse and intimidation of Reverend Mother (Melissa Leo). But as we go along we see Cathleen struggling with her path, and simultaneously Mother struggling with Vatican II reformist doctrine. 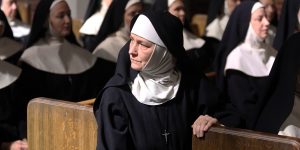 Betts has a distinct directorial voice, which is impressive to see first time out of the gate; sharp, short scenes arriving at a good clip, though she over-relies on musical cues to let us know how to feel and could trust her audience a little more on the script level, with more showing and less telling. And was I the only one who noticed those young nuns-to-be were wearing a lot of eye-shadow and lipstick? Nonetheless, it’s a great looking production and the cast delivers the required emotions. Qualley, whose first feature credit was Palo Alto in 2013, is on a path to stardom.