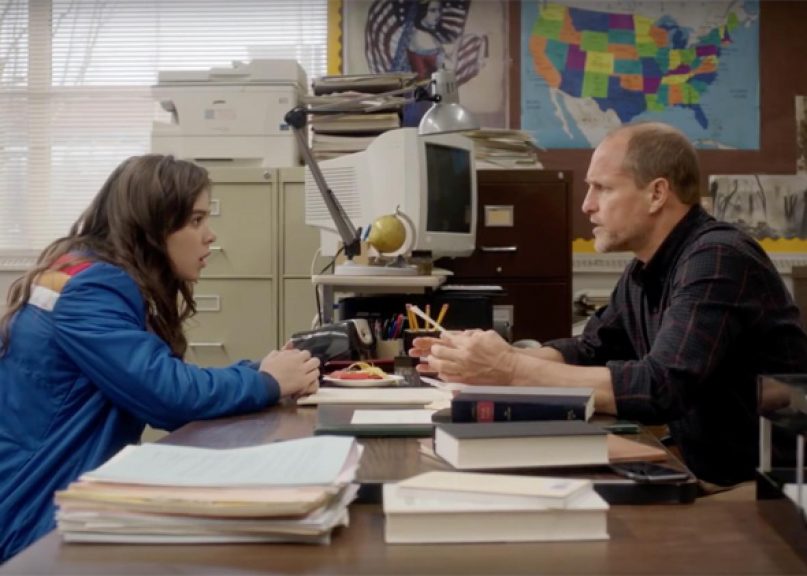 Nadine (Hailee Steinfeld) is a junior in high school and she’s struggling. Her father died four years ago, leaving her neurotic mother (Kyra Sedgwick) raising two teenagers alone. Nadine’s brother, Darian (Blake Jenner), was always the golden boy, the popular one free of the crippling self-doubt Nadine and her mother struggle with.

The set-up gets us on Nadine’s side right away: She’s bright and adorable—a misfit of her own making, sure, but swimming in the shark pool of high school where status and attitude are everything. It’s a good thing she’s got a teacher she likes, Mr Bruner (Woody Harrelson, terrific), and  a best friend, Krista (Haley Lu Richardson). But then, after one debauched night, Krista sleeps with Darian, and things really go south. The Edge of Seventeen elegantly walks a line so narrow you can barely see it: Nadine goes from misunderstood hero to painfully selfish and deluded without losing our sympathy. Twenty-five percent of that is an even hand in the script and editing—one wonders about the influence of genius storyteller James L. Brooks, here credited as producer—but fully three quarters is Steinfeld. She’s been good before in things like True Grit, but here she carries the whole picture, somehow managing to never once being anything but authentic.

Meanwhile, the film curves around her, offering some nicely tuned comedy—big props to costar Hayden Szeto as Erwin, a potential Nadine love interest, for his timing—but the last act is heavy into the pathos, where Nadine finds redemption by owning her bullshit and recognizing the suffering of people around her. A few of minor drawbacks: Craig shoots in Vancouver without acknowledging the city at all. It’s one thing to tell a suburban story that’s self-consciously about the ‘burbs, and it’s another to hide any recognizable landmark. No sense of the location makes for a layer of blandness. Consider, for example, how last year’s Me And Earl and The Dying Girl  deftly used the character of Pittsburgh. Also, where are the (non-prescription) drugs? It’s hard to believe Nadine wouldn’t have been tempted to hang with the stoners somewhere along the way.

Finally, there are some well-chosen songs on the soundtrack by Santigold, Aimee Mann, and Spandau Ballet. But how did they get away with naming a movie after the legendary Stevie Nicks track and not include it? Not even a cover?