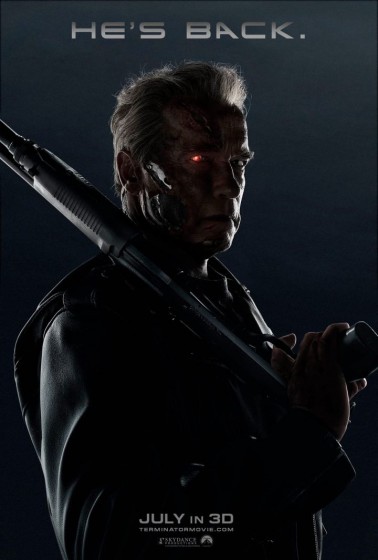 Thanks to the July 4th weekend in the ‘States, a couple movies are opening early this week, including Terminator: Genisys, the fifth in the franchise (to date) and the first with creative spelling in the title. I’ve already mentioned how blasé I am about the film’s arrival, largely based on the trailers. But Arnie is back in his most celebrated role, there’ll be things blowing up real good, so there’s that. On this weekend back in 1991 I happened to be in Manhattan, and I remember well seeing Terminator 2: Judgement Day on opening night. That was a hell of an event—one of my favourite movie memories. People applauded the special effects.

I’ll have my review of Terminator: Genisys up on FITI in the coming days. Please check back for that.

I have already seen Magic Mike XXL, which I liked quite a bit. Much funnier than the first film, it does suffer for its weird pacing, but I’d still recommend the film. It’s smarter and more fun than it needs to be, given what most are really going for: greasy abs and pecs. (I’m trying to get #SausageShowgirls trending in association with the film, but no luck yet….)

The documentary Amy, about the life and career of Amy Winehouse, screens Monday (July 6) at 7:15pm (Park Lane). I’ve heard good things about the doc, even though her father, Mitchell, has come out against the doc, saying it portrays his daughter in “the worst possible light.” I’m hoping to see it in advance of the screening and will post a review here if I can. For anyone out there who calls themselves a Deadhead, here’s something for you: The remaining members of the Grateful Dead are reuniting for a series of shows in Chicago this weekend, calling it Fare Thee Well: Celebrating 50 Years of the Grateful Dead, the third of which will be broadcast to cinemas on Sunday evening (July 5) at 9pm (Bayers Lake, Dartmouth Xing, Park Lane). Expect lots of jamming, fond remembrances of lead singer Jerry Garcia (who passed away 20 years ago), and of the long, strange trip that was The Dead, which started back in 1965.