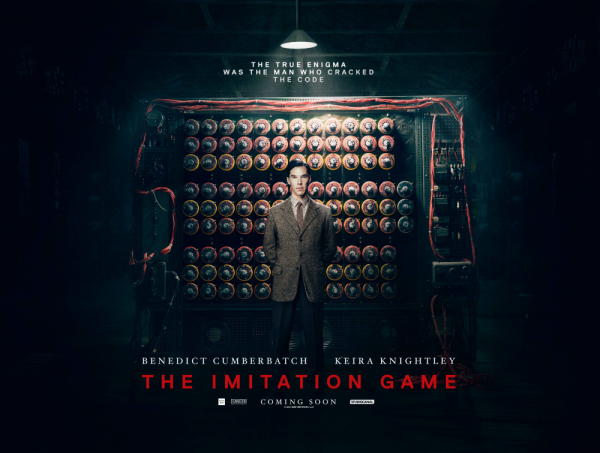 Alan Turing was a British mathematician who helped break the Enigma code, the encrypted communications the Nazis used to direct U-Boat attacks in the North Atlantic, amongst other things. His contribution to that code-breaking—including the creation of one of the world’s first computers—was unacknowledged for decades. The Imitation Game tells Turing’s story as a solidly entertaining history lesson, one that truly soars when the film goes beyond the war and shows the cost Turing paid in the years following.

Unlike the other movie I recently reviewed that touches on the same material, called Enigma, this picture is less a zippy spy thriller and more a straight ahead biopic, though that 2001 film would make a terrific double feature with this one. 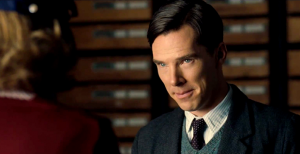 Things begin pretty conventionally: An anti-social, possibly Aspergian math wizard, Turing applies for a job at Bletchley Park, a British military compound north of London.  Overbearing and hilariously smug, he ruffles the feathers of his interviewer (a typically gruff Charles Dance) but still finds his way onto a team of codebreakers, annoying the ostensible guy in charge, Hugh (Matthew Goode). Secrecy is paramount, which the man from MI6 (Mark Strong) reminds them.

Before long, Turing’s undeniable and insufferable brilliance has been acknowledged, and he takes control of the finances for the project, which he uses to build his complex code-breaking machine. He also hires Joan (Keira Knightley), a woman with a knack for crosswords, to join the team.

The set-up has plenty of charm, but the emotional beats of the first act are telegraphed and predictable—this is textbook prestige historical drama, incorporating factual events, sentiment, and a dash of humour to keep audiences engaged.

The Imitation Game really gets interesting when it shifts gears and time periods—as Turing and his colleagues work against time to solve this puzzle, we see him both as a child and what his life was like after the war.

The message of the film—embedded in both the historical importance of Turing’s work and the avoidable tragedy of his personal story—is well framed by Tyldum’s crisp, intelligent direction. The Norwegian filmmaker of the wonderfully twisty thriller Headhunters  has taken his structural smarts and applied them in a very different genre with remarkable results.

Knightley impresses in support, but it’s really Cumberbatch’s show . As a man who spends his days decoding secrets carries a few of his own, it’s in his moments of vulnerability where the actor’s presence really lifts the film. He’s in his element playing obsessive, eccentric characters. His Sherlock Holmes is now culturally definitive—sorry Basil Rathbone, Jeremy Brett, and, ahem, Robert Downey Jr.

But Turing’s peculiarities, his mannerisms, are nothing like Sherlock. Cumberbatch’s gifts are manifold, as are the variations in his creations.

The Imitation Game opens in Halifax on December 25